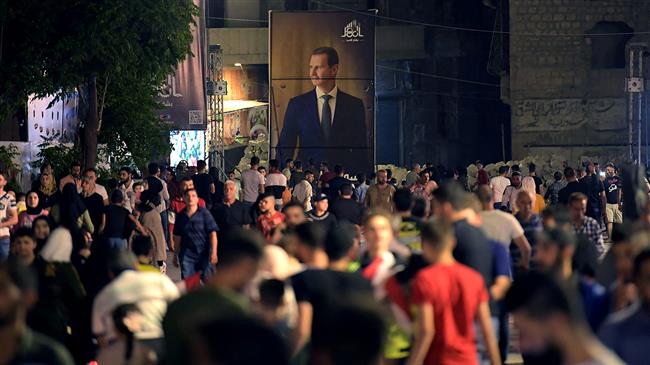 A political commentator says the results of the recent presidential election in Syria, where President Bashar al-Assad won another term in office with 95.1% of the votes, clearly showed the determined public resistance in the face of an all-out onslaught being waged by imperialist powers.

“The overwhelming election victory for President Assad is symbolic of the Syrian people’s resistance against the ten-year-long imperialist hybrid war, which has been waged against them with an unrelenting savagery on all fronts – military, economic, diplomatic and media,” Vanessa Beeley told Press TV in an exclusive interview on Sunday.

She said the most significant aspect of Syria’s polls is that “the elections were held in spite of wholesale condemnation by the United States and the United Kingdom.”

The London-based journalist said the disdainful remarks “were largely ignored by Syrian people, who defended their self-determination and their constitution by heading to polling stations across liberated areas in millions.”

Beeley said Western powers have spared no effort in order to pit the Syrian nation against the incumbent Damascus government, crafting bogus legal cases on the basis of fraudulent or manipulated data and forcing the Syrian economy into a free fall.

“Syrian people voted for stability, security and peace. The vote sends the message to the West that Syrians will not be subjugated or divided. Syrians will defend Syria’s sovereignty and territorial integrity until their last breath. The popular rallies [staged after Assad’s re-election as president] defied the misery that Syrian people have endured, and marked a historic victory over globalism,” she said.

The journalist dismissed criticisms by the United States, Britain, France, Germany and Italy against Syria’s presidential election, saying they can lay no claim to democracy.

“They have prevented Syrians from exercising their democratic right to vote at Syrian embassies simply because they know that vote would further humiliate them.

“How dare these countries speak of justice or freedom when, for ten years, they have ensured that Syrian people either inside or outside the country have endured a life of misery, bloodshed, poverty and loss?” she said.

Beeley said Western powers cannot pass judgment on Syria, as they have been destroying the Arab country for more than a decade, occupied its territories unlawfully, looted its resources including oil and water, set fire to essential agricultural crops and laid a crippling siege to it.

Syria’s presidential election, she said, could not have been impartially held under UN supervision, adding the agency is “nothing more than an extension of US and UK military adventurism.”

“Any organization that is dominated and coerced by the West can never be considered an arbiter of international affairs,” she said.

The Syrian parliament announced on Thursday that President Assad had won his fourth seven-year term in the May 26 presidential race.

Hamoudeh Sabbagh, the parliament speaker, said that Assad won 95.1 percent of the vote as opposed to 88.7 percent in the 2014 election.

He said that about 14 million of the estimated 18 million eligible voters inside and outside Syria cast their votes, with a turnout rate of 78.64 percent.