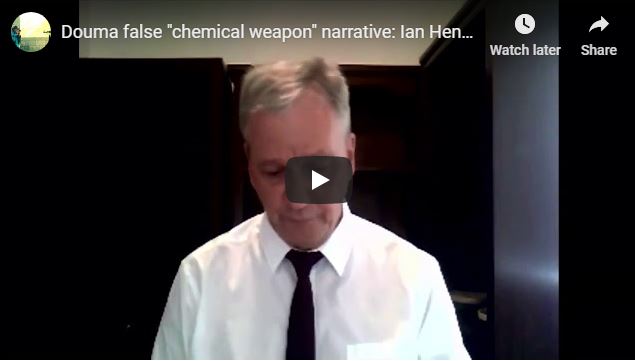 Transcript of part of Henderson’s statement:

“My concern which is shared by a number of other inspectors relates to the subsequent (OPCW) management lockdown and the practices in the later analysis and compilation of the final report.

There were two teams deployed, one team, which I joined shortly after the start of field deployments, was to Douma in Syria. The other team deployed to country X.

The main concern relates to the announcement, in July 2018, of a new concept, the so-called FFM core team which essentially resulted in the dismissal of all of the inspectors who had been on the team deployed to locations in Douma and had been following up with their findings and analysis.

The findings in the final FFM report were contradictory, were a complete turnaround with what the team had understood collectively during and after the Douma deployments and by the time of release of the interim report, in July 2018, our understanding was that we had serious misgivings that any chemical attack had occurred.

What the final FFM report does not make clear and thus does not reflect the views of the team members who deployed to Douma, in which case I can only really speak for myself at this stage.

The report did not make clear what new findings, facts, information, data or analysis in the fields of witness testimony , toxicology studies, chemical analysis and engineering and or ballistic studies, had resulted in a complete turnaround in the situation from what was understood by the majority of the team and the entire Douma team in July 2018.

In my case, I had followed up with a further six months of engineering and ballistics studies into the cylinders, the result of which had provided further support for the view there had not been a chemical attack.