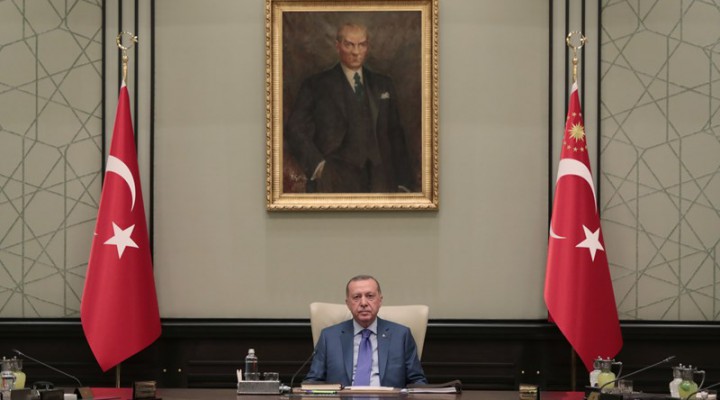 After three years of relative withdrawal from the international scene, Turkey has specified its direction. While still remaining a member of the Atlantic Alliance and its integrated command structure, it intends to express its independence. It will not receive orders either from the Atlantic Alliance or the Collective Security Treaty Organisation. On the interior, while defining itself as Muslim, it wants to integrate the minorities on a national basis and fight the elements which are under the orders of the United States.

Turkey is changing, and the projections of George Friedman, founder of Stratfor, are shown to be wrong. If the ex-Ottoman empire is to develop, it will not be as a vassal of the United States.

Rather than judging Turkey from the point of view of Western standards, and mocking its « new sultan », we need to understand how « Europe’s invalid » is attempting to bridge its cultural gap from modernity and its defeat in the First World War, without denying its historical and geographical specificity. Indeed, a century later, the plan hinted at by Atatürk has not yet reached a conclusion, and the problems persist.

We thought that with the AKP, (Justice and Development Party), Turkey was becoming an inclusive Islamic democracy, comparing its doctrine to that of European Christian-Democracy. Progressively, it reconnected with its Ottoman splendour by becoming the spokesman for the Muslim world. Supported by the United States, it was destined to become a first-rate economic power. Pursuing its modernisation and its Westernisation, it turned its back on its most important client, Libya, then on its economic partner, Syria, and increasingly strengthened its relations with the West.

However, the attempted assassination in Marmaris of newly-elected President Recep Tayyip Erdoğan on 15 July 2016, which morphed into an improvised coup d’État, failed miserably to change the state of things. For three years, the AKP struggled to manage the situation. It began to examine its policies. It instituted the third anniversary of the coup d’État, in order to clarify its positions.

First of all, contrary to what we had believed, modern Turkey is neither with the West nor the East. It defines itself as a nation connected with both worlds, half Asian, half European, nothing of which is changed by its adhesion to the Atlantic Alliance or its participation in the Western wars of the « Arab Spring ».

This is illustrated by its purchase of the Russian S-400 anti-aircraft system. Ankara claims both its membership of NATO and its right to buy weapons from the Alliance’s adversary. It even specifies – correctly – that nothing in the texts prevents it from making this choice, and authorises no-one to sanction it.

More than ever, the Turks are « the children of the wolves » who conquered Asia and a part of Europe. It is in this context that we should understand the Astana negotiations (Russia-Iran-Turkey) for peace in Syria. Or again, the anti-imperialist declarations of the Turkish delegation at the Summit of the Non-Aligned Movement in Caracas.

Second, Turkey is basing its economic independence on its Turkish Stream energy project and the exploration of the exclusive maritime zone of Cyprus. This is obviously its weak point. Certain segments of the Russo-European gas pipeline which cross Turkey are already operational, but the European Commission can always oppose it, under US pressure ; the importance of investments will not be any greater than for North Stream 2. Finally, according to international Law, Turkey has no rights to the exclusive maritime zone of Cyprus, and the support of the puppet state of the Turkish Republic of Northern Cyprus counts for nothing.

It is in this context that the Minister for Foreign Affairs, Mevlüt Çavuşoğlu, has just announced the suspension of the agreement on migration with the European Union (just after the payment of their annual two billion Euros).

Third, Turkey has broken with the Anglo-Saxon financial model. The quality of life in Turkey has been deteriorating progressively since the Western war against Libya, and even more so during the Western war against Syria. Ankara therefore suddenly decided to take up the reins of its central bank and to lower its interest rates from 24 % to 19,75 %. No-one knows what will be the economic consequences of this decision.

Fourth, contrary to the period between 2002 and 2016, it was still possible for the minorities to be Turkish, but not for those individuals who have built alliances abroad. Since the coup d’État, a gigantic purge has expelled from the army and the administration all those who were suspected of having subordinate links with the United States, and particularly the disciples of Fethullah Gülen (now a refugee in Pennsylvania). Hundreds of thousands of citizens have been imprisoned. The war has not been pursued against the Kurdish minority, but against the Kurds allied with Washington.

Unlike the perception we have of him, Recep Tayyip Erdoğan is not imposing dictatorship by way of personal mythomania, but is resorting to violence to change the course of his country. 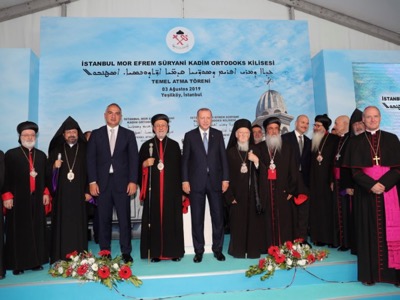 President Erdoğan, ex-officer of Millî Görüş (an extreme right wing organisation opposing non-Muslims), awarded an exceptional derogation authorising the construction of a church. He laid the first stone on 3 August 2019.

Fifth, Turkey defines itself as a Muslim state which respects minorities. For example, President Erdoğan has just laid the first stone of a Syriac church in Istanbul. This choice is incompatible with his blind support for the Muslim Brotherhood and his project for a Caliphate. « Muslim solidarity » is an illusion devoid of meaning and – as for Iran— he will have to decide to which « Islam » he is referring. At present, Ankara has broken with its previous posture by diminishing its help for the Muslims of the Chinese Xinjiang.

Currently, the Turkish army occupies Northern Cyprus, is at war in Iraq, Syria and Libya, and is deployed all around Saudi Arabia – in Qatar, Kuwaït, Sudan and the Red Sea. This omnipresent activism can not last, particularly in opposition with Israël and the Atlantic Alliance.

All of this in fact opens up new perspectives which the United States do not want. Already the ex-Minister for the Economy, Ali Babacan, and his ex-Prime Minister Ahmet Davutoğlu have joined Abdullah Gül, the ex-President of the Republic. Gül abandoned his rivalry with his ex-partner Erdoğan during the legislative elections, and considers that the defeat of the AKP in the municipal elections – particularly in Istanbul – opens the way for preventing the imposition of a dictatorship. Together, with the help of the CIA, they are trying to organise dissidence within the AKP. Langley aims at realising by electoral means what was attempted by the attempted assassination of President Erdoğan in 2016.

« If they don’t disappoint us, who will? », declared President Erdoğan.