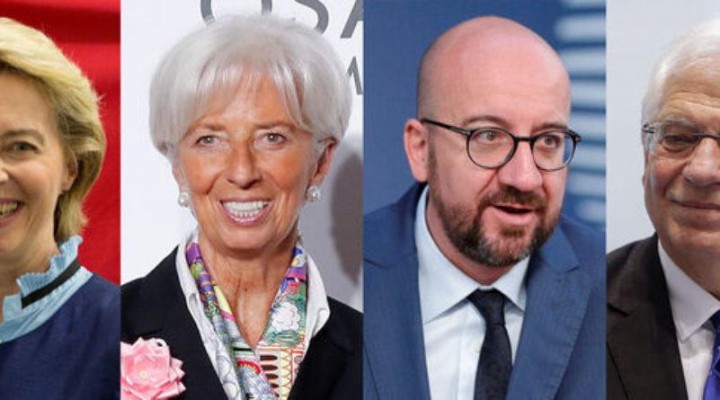 Since the European Union has become a super-national structure by the force of Treaties, how can the member-States choose the senior civil servants who are to give them orders? In fact, they are not doing so, but are settling for accepting the choice of NATO, as presented by Germany and France.

In theory, it had been decided by the United States, Germany and France, before the elections for the European Parliament, that the President of the Commission would be the German Manfred Weber. He had promised to halt construction work on the gas pipeline North Stream 2, and to limit the buying of Russian hydrocarbons by the Union for the benefit of US gas, which is much more expensive in terms of both production and transport.

In order to ensure that European voters remain comatose, an intense propaganda campaign had assured that the President of the Commission would be elected according to « democratic rule » – the winner would be the leader of the most important elected parliamentary group. There was no doubt that this would be Manfred Weber, as head of the conservatives (PPE). Of course, this rule has never been democratic, because democracy would have consisted of specifying a person who had earned the support not of a parliamentary group, but of a majority of voters. However, the Press and the candidates continued to repeat this stupidity, aware as they are that the EU is just a decoy.

But at the last moment, France went back on its promise. President Emmanuel Macron pretended that his parliamentary group (ADLE, now become Renew Europe) had managed to operate a breakthrough strong enough to warrant one of the four most coveted civil servant posts. He therefore arranged to have Manfred Weber insulted by the head of his party’s list, Nathalie Loiseau – who called him an « ectoplasm » and vetoed his nomination. Finally, Weber himself proposed a new German candidate, Ursula von der Leyen, once the nomination of Christine Lagarde at the head of the European Central Bank had been assured.

These two women will therefore be occupying the two most important posts, while the Belgian Charles Michel will preside over the Council of the Heads of State and Government – and also that of the Eurozone – and the Spanish Josep Borrell will be the senior representative for Foreign Affairs and Security Policy. These two functions are purely formal. The Presidency of the Council consists only of distributing microphone time to the speakers and representing the Union abroad. The senior representative is the spokesperson for a policy that everyone knows to be fixed in Washington and not in Brussels.

These nominations were not chosen by the European Council, but by the German Chancellor and the French President during a brief conversation, and then accepted by the Council.

How were these four senior civil servants elected? They have to correspond to two criteria :

having something to feel guilty about, which makes it possible to blackmail them if ever they were to lose the Atlantist faith.

Being Atlantist is an evidence for any European civil servant, since the Treaty of Maastricht and those that followed stipulate that the defence of the Union is to be ensured by NATO, the anti-Russian military alliance.

At the beginning of the year, Ursula von der Leyen published a timely op ed in the New York Times to praise NATO for « defending the world order » [1].

The Atlantism of Christine Lagarde needs no further demonstration, since she began her career as a parliamentary assistant in the US Congress, and became a lobbyist for the US Defence industry against its French equivalent. It was she who convinced Poland to buy Boeing and Lockheed-Martin equipment rather than Airbus and Dassault [2].

Charles Michel is the Prime Minister of NATO’s host country, and is recommended by his father, Louis Michel, an ex-European Commissioner for international cooperation, humanitarian aid and crisis reaction. Josep Borrell, ex-member of the Gal On kibbutz (Negev desert), was at one time the President of the European Parliament, where he ardently defended the principle of European servitude to the Atlantic Alliance.

The four supplicants were invited, naturally enough, to meetings of the Bilderberg group, the NATO club. However, Josep Borrell was unable to attend last month’s meeting because he had been forbidden to do so by his Prime Minister.

« Having an uncomfortable secret »

Even if they trust their employees, the United States always prefer to have a means of pressure should they need to force them back into line. Indeed, it too often happens that some senior civil servants are not content with their astronomical salary, and get it in their heads to serve their compatriots.

A legal enquiry was under way concerning Ursula von der Leyen’s management of the Ministry of Defence. While the German army is notoriously under-equipped, the colossal over-spending in several affairs had already unleashed an enquiry by an audit company who finally agreed that the explanations provided were sufficient. But the discovery that the surveillance for this company was organised by the son of this grand aristocrat had alerted the criminal court. German « rule of law » is organised in such a way that makes it possible for the Chancellery to halt judicial enquiries into members of the government .

Christine Lagarde was found guilty of « negligence » by the French Court of Justice, but was dispensed of punishment. She had decided to bring financial litigation between a public bank and an ex-minister before an arbitration court rather than before the tribunals. The arbitration court condemned the state and found on behalf of the ex-minister, which should never have happened.

I do not know what shady affairs Charles Michel and Josep Borrell are implicated in, but there are bound to be some – the former accepted to direct a minority government, and the latter, while he was at the summit of his career, abandoned political activity for about ten years.

The salaries of each of these four senior civil servants are more than twice that of the French President. It’s not a case of remunerating them for their exceptional qualities, but of making sure that they will use them on behalf of their overlord. That is the price of their treason.

‘This is not democracy’: European parliament unites to condemn selection of new EU Commission president behind closed doors

Analysis of the European Parliamentary elections

The European Union, in the moment and in the long run