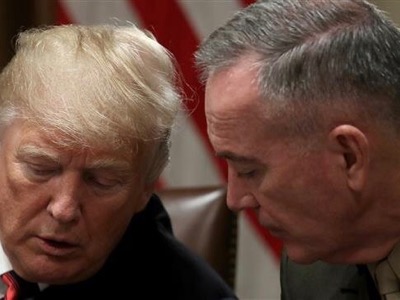 Since the Treaty of Maastricht, all the members of the European Union (including the neutral countries) have placed their defences under the suzerainty of NATO, which is directed exclusively by the United States. This is why, when the Pentagon delegates the economic headquarters of the countries it wishes to destroy to the US Department of the Treasury (USDT), all members of the European Union and NATO are obliged to apply US sanctions.

After having lost his majority in the House of Representatives during the mid-term elections, President Trump has found new allies in exchange for his discharge by prosecutor Mueller of the accusation of high treason [1]. He now supports the objectives of his generals. US imperialism is back [2].

In less than six months, the foundations of international relations have been « rebooted ». The war that Hillary Clinton promised to start has been declared, but not only by military force.

This transformation of the rules of the game, without equivalent since the end of the Second World War, immediately forced all actors to rethink their strategy, and therefore all the plans for alliance upon which they were based. Those who turn up late will pay for it.

Economic war has been declared

Wars will always be mortal and cruel, but for Donald Trump, who was a businessman before becoming President of the United States, it is best that they cost as little as possible. It is thus preferable to kill with economic means rather than by the use of arms. Given that the United States no longer share trade agreements with most of the countries they attack, the real « economic » cost of these wars (in the genuine sense of the term), is in effect supported by third-party countries rather than by the Pentagon.

Thus the United States have just decided to lay economic siege to Venezuela [3], Cuba [4] and Nicaragua [5]. In order to mask real killing wars, these actions are presented by the media apparatus as « sanctions », without giving us any idea of what law Washington is basing them on.

They are deployed with explicit reference to the « Monroe Doctrine » of 1823, according to which no foreign power shall intervene on the American continent, while in exchange, the United States will refrain from intervening in Western Europe. Only China, which felt targeted, pointed out that the Americas are not the private property of the United States. However, everyone is aware that this doctrine has evolved rapidly to justify Yankee imperialism in the South of the continent (the « Roosevelt Corollary »).

Today, US sanctions concern at least twenty countries – Belarus, Myanmar, Burundi, North Korea, Cuba, the Russian Federation, Iraq, Lebanon, Libya, Nicaragua, the Syrian Arab Republic, the Bolivarian Republic of Venezuela, the Central African Republic (CAR), the Democratic Republic of the Congo, the Islamic Republic of Iran, Serbia, Somalia, Sudan, South Sudan, Ukraine, Yemen and Zimbabwe. That gives us a very precise map of the conflicts led by the Pentagon, assisted by the US Department of the Treasury (USDT).

These targets are never in Western Europe (as specified by the « Monroe Doctrine »), but exclusively in the Middle East, Eastern Europe, the Caribbean Basin and Africa. All these regions were listed as early as 1991 by President George Bush senior in his National Security Strategy as being flagged to join the « New World Order » [6]. Considering that that they had been unable or unwilling to do so, they were sanctioned in 2001 by Secretary of Defense Donald Rumsfeld and his advisor for the transformation of the armed forces, Admiral Arthur Cebrowski, and doomed to chaos [7].

The expression « economic war » was waved about for decades to indicate heightened competition. This is no longer true today – we are now talking about a real killing war.

The Syrians, who have just won an eight-year military war against NATO’s jihadist mercenaries, are destabilised by this economic war, which imposes strict rationing of electricity, gas and oil, and provokes the closing of factories which had only just been reopened. At best, they can be relieved that the Empire did not inflict these two forms of war at the same time.

The Venezuelans are now discovering with horror what economic war actually means, and are realising that with the tinhorn Juan Guiado as much as with President Nicolas Maduro, they are going to have to fight to maintain their state (in other words a ’Leviathan’ capable of protecting them [8]).

The strategies of the targeted states are themselves plunged into confusion. For example, since they are no longer able to import medicines for its hospitals, Venezuela has signed an agreement with Syria, which was, before the war of 2011, a very important producer and exporter in this sector. Factories which had been destroyed by Turkey and the jihadists were rebuilt in Aleppo. But although they had just been reopened, they now had to close again, since they had no available supply of electricity.

The multiplication of theatres of war – and therefore of the pretended « sanctions » – began to cause serious problems for the allies of the United State, including the European Union. The EU did not appreciate the threats of seizure aimed at companies which had invested in Cuba, and, remembering the actions engaged to forbid them access to the Iranian market, reacted by threatening in their turn to seize the Arbitration Committee of the World Trade Organization (WTO). And yet, as we shall see, this revolt by the European Union is doomed to failure, since it was anticipated 25 years ago by Washington.

Anticipating the current reaction of the European Union, worried about not being able to trade with whomever it saw fit, the administration of Bush senior elaborated the « Wolfowitz Doctrine », which was concerned with making sure that the Western and Central Europeans would never have an independent defence system, but only a system which was autonomous [9]. This is why Washington castrated the European Union at its birth by imposing a clause to be inserted in the Treaty of Maastricht – the suzerainty of NATO. I am writing here about the European Union, not the Common Market.

We should remember the total support offered by the European Union to all of the Pentagon’s adventures, in Bosnia-Herzegovina, Kosovo, Afghanistan, Iraq, Libya, Syria, and Yemen. In all these cases, without exception, the EU marched along in step with its suzerain, NATO.

This vassal condition is in fact the only reason that the Western European Union (WEU) was dissolved, and it is also why President Trump gave up the idea of dissolving the Atlantic Alliance’s permanent military organisation – without NATO, the European Union would gain its independence, since it is only to NATO – and not the United States – that these treaties refer.

Of course, the treaties stipulate that all this must be implemented in conformity with the United Nations Charter.

But, for example, on March 2019, the United States questioned the resolutions it had approved concerning the sovereignty of Golan. Without warning, they changed their minds, provoking the de facto collapse of International Law [10].

Another example – the United States this week took position in Libya for General Khalifa Haftar, with whom President Trump shared a telephone call to assure his support against the government created by the UNO [11], and we are now seeing members of the European Union, one by one, following his lead.

Because of the consecutive treaties, it would be impossible for the EU to free itself from NATO, (which means the United States), and declare itself a power in its own right. Protests against the pseudo-sanctions which were yesterday decided against Iran and today against Cuba are doomed to failure in advance.

Contrary to a commonly-held belief, NATO is not governed by the North Atlantic Council, in other words the states which are members of the Atlantic Alliance. When, in 2011, the Council, which had approved an action intended to protect the Libyan population against the alleged crimes of Mouamar Kadhafi, declared itself in opposition to a « régime change », NATO attacked without consultation.

The members of the European Union, which formed a single bloc with the United States during the Cold War, discovered with stupefaction that they do not have anything like the same culture as their trans-Atlantic ally. During this parenthesis, they had forgotten both their own European culture and the « exceptionalism » of the USA, and believed wrongly that they were all in agreement with one another.

Whether they like it or not, they are today co-responsible for Washington’s wars, including for example the famine in Yemen, consecutive to the military operations by the Saudi Coalition and to US sanctions. They now have to choose either to assume these crimes and participate in them, or to leave the European treaties.

International commerce is beginning to decline. This is not a passing crisis, but a deep-rooted phenomenon. The process of globalisation which defined the world from the dissolution of the USSR to the mid-term elections of 2018 is now ended. It is no longer possible to export freely all over the world.

Only China still has this capacity, but the US State Department is currently developing methods forbidding it access to the Latin-American market.

In these conditions, debates on the respective advantages of free-exchange and protectionism are no longer pertinent, because we are no longer at peace and we no longer have a choice.

In the same way, the construction of the European Union, which was imagined at a time when the world was divided into two irreconcilable blocs, is today completely inadapted. If they want to avoid being dragged by the United States into conflicts which are not their own, its members will have to free themselves from the European treaties and the integrated command of NATO.

Therefore it is completely off-subject to look at the European elections as opposing progressives and nationalists [12]. This is not the point at all. The progressives affirm their desire to build a world governed by International Law, which their godfather, the United States wants to eradicate, while certain nationalists, like the Poland of Andrzej Duda, are preparing to serve the United States against their partners in the European Union.

Only certain British subjects have sensed the current storm. They have attempted to leave the Union, but without managing to convince their parliamentary representatives. It’s said that « to govern is to foresee », but most members of the European Union have foreseen nothing.

The Trump Phenomenon as Seen in Europe