HOME / Politics / Final Steps of the Multipolar Revolution: Containing the US in Europe 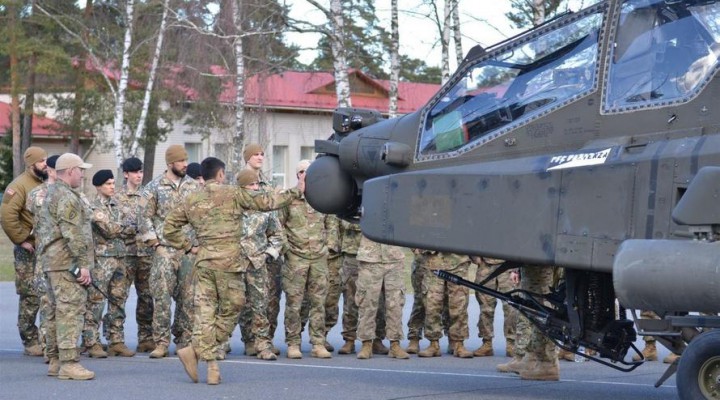 We discussed in the previous article how China and Russia are using diplomatic, economic and military means in areas like Asia and the Middle East to contain the belligerence and chaos unleashed by the United States. In this analysis, we will examine the extent to which this strategy is working in Europe. In the next and final article, we will look at the consequences of the “America First” doctrine in relation to South America and the Monroe Doctrine.

The United States has in the last three decades brought chaos and destruction to large parts of Europe, in spite of the common myth that the old continent has basked in the post-WWII peace of the American-led world order. This falsehood is fueled by European politicians devoted to the European Union and eager to justify and praise the European project. But history shows that the United States fueled or directed devastating wars on the European continent in Yugoslavia in the 1990s, with the conflict between Georgia and Ossetia at the beginning of the 1990s, with the war in Georgia in 2008, and in the coup in Ukraine in 2014, with the ensuing aggression against the Donbass.

The major problem for Washington’s European allies has always been summoning the will to contain US imperialism. For many years, especially since the end of the Cold War, European countries have preferred to defer to Washington’s positions, confirming their status as colonies rather than allies. It is fundamental to recognize that European politicians have always been at the service of Washington, eager to prostrate themselves to American exceptionalism, favoring US interests over European ones.

The wars on the European continent are a clear demonstration of how Washington used Europe to advance her own interests. The abiding goal of the neocons and the Washington establishment has been to deny any possibility of a rapprochement between Germany and Russia, something that could potentially result in a dangerous axis threatening Washington’s interests. The war of aggression against Yugoslavia represented the deathblow to the Soviet republics, an effort to banish the influence of Moscow on the continent. The subsequent war in Ossetia, Georgia and Ukraine had the double objective of attacking and weakening the Russian Federation as well as creating a hostile climate for Moscow in Europe, limiting economic and diplomatic contacts between East and West.

In recent years, especially following the coup in Ukraine, the return of Crimea to the Russian Federation, and Kiev’s terrorist action against the Donbass, relations between Russia and the West have deteriorated to historically low levels.

The election of Trump has sent confusing signals to the Europeans vis-a-vis Russia. Initially Trump seemed intent on establishing good relations with Putin in the face of strong opposition from European allies like France, Germany and the UK. But the possibility of a US-Russia rapprochement has been severely undermined by a combination of Trump’s inexperience, the unhelpful advisors he has appointed, and the US deep state. This geopolitical upheaval has had two primary consequences. For the Germans, first and foremost, it has deepened energy and economic cooperation with Moscow, especially in relation to the Nord Stream 2. But on the other hand, Trump has found friends in European countries hostile to Russia like Poland.

The divergences between the US and Europe have widened with Washington’s withdrawal from a number of important treaties like the Intermediate-Range Nuclear Forces Treaty (INF Treaty) and Joint Comprehensive Plan of Action (JCPOA), or the Iran nuclear deal, both of which have a direct impact on Europe in terms of security and the economy. Donald Trump and his “America First” attitude has thereby afforded Europeans some space to maneuver and establish some level of autonomy, resulting in increasing synergies with Moscow and especially Beijing.

In economic terms, China has offered Europe (with Greece as a prime example) full integration into the Belt and Road Initiative (BRI), a project with vast possibilities for increasing trade among dozens of countries. Europe will become the main market for Chinese goods, but at the moment one of the greatest obstacles to be overcome can be seen in the freight trains, which often start their journey towards Europe full but are half-empty on their return journey to China. Beijing and the major European capitals are well aware that to make the BRI project economically sustainable, this exchange must go in both directions so that both sides gain.

The technological interconnection between China and Europe is already happening thanks to Huawei devices that are being purchased by European companies in increasing numbers. The absence of back doors in Huawei systems, in contrast to what Snowden has shown with other Western systems, is the real reason why Washington has declared war on this Chinese company. Industrial espionage is a priceless advantage enjoyed by the United States, and the presence of backdoors on Western systems, to which the CIA and NSA have access, guarantees a competitive advantage allowing Washington to excel in terms of technology. With the spread of Huawei systems this advantage is lost, to the chagrin of Washington’s spy apparatus. European allies understand the potential advantage to be gained and are protecting themselves with the Chinese systems.

In technological terms, Beijing’s efforts are proving very successful in Europe and are paving the way for future physical integration in the BRI. In this sense, the participation of such European countries as the UK, France, Germany and Italy in the Chinese-led Asian Infrastructure Investment Bank (AIIB) also shows how the prospect of Chinese capital investments are of great interest to troubled European economies.

In the military field, the US withdrawal from the INF Treaty threatens the safety of European countries because of the measures adopted by the Russian Federation to guarantee necessary protection from US systems deployed in Europe. A proverb states that when elephants fight, it is the grass that suffers. Europe, as the potential battlefield in any great-power confrontation, has the most to lose from a renewed cold war that could turn hot. Moscow’s revelation of its new generation of weapons has caused anxiety among Europeans who worry that their lives may be sacrificed in order to please Americans who are thousands of miles away. At the same time, the Americans want to get rid of NATO while demanding that the Europeans spend more on American weapons and also limit Sino-Russian investments in Europe. It is likely that the breakdown of the INF Treaty, combined with the conventional and nuclear capabilities of Moscow, will boost diplomatic talks between Russia and Europe without the US being able to sabotage future agreements. Some European countries are keen to be rid of the policy of subordinating their interests to that of Washington, especially with regards to security.

Russia cleverly uses two decisive instruments to limit Washington’s influence on Europe and contain the chaos produced by its foreign-policy establishment. Firstly, it has the strength of its own conventional and nuclear arsenal that acts as a deterrent against excessive provocations. Secondly, it has huge deposits of oil and LNG that it exports to the European market in considerable quantities. The combination of these two factors allows Moscow to contain the chaos unleashed by the US in such places as Georgia or Ukraine as well as limit US influence on internal European affairs, as can be seen in the case of Germany and the Nord Stream 2 project. Merkel is forced to concede that in spite of her demonisation of Moscow, Berlin cannot do away with Russia’s supply of energy. This has increased tensions between Berlin and Washington, with the US eager to replace Russian gas with its own much more expensive LNG shipped all the way across the Atlantic.

Chinese economic power, combined with Russia’s military deterrence as well as European reliance on Russia for its energy supply, shows that Europe cannot afford to follow its American ally in acting provocatively against the Sino-Russian axis. Europe has, moreover, suffered from US wars in the Middle East and the waves of migrants brought on by this. Small shoots of strategic autonomy can be seen in the creation of the Instrument in Support of Trade Exchanges (INSTEX), an alternative payment system to the dollar to work around sanctions against Iran. The little or no diplomatic support extended to Ukraine’s anti-Russia stance by France and Germany could be seen as another sign of the Europeans becoming more independent. The recent Munich Security Conference, with Poroshenko in attendance, further confirmed that Merkel intends to rely on Russian gas supplies in the interests of energy diversification.

The combined diplomatic, military and economic actions of Russia and China in Europe are decidedly more limited and effective in Europe compared to other parts of the world like the Middle East and Asia. Political rhetoric, amplified by the media, that is against cooperation between Europe, Russia and China, only serves the interests of the United States. Russia and China are succeeding by proposing viable alternatives to Washington’s unipolar world order, extending to European countries a strategic liberty that would otherwise not be available to them in a Washington-directed unipolar world order.

It is still not clear whether the European capitals are turning to Moscow out of anti-Trump rather than anti-American sentiment. It remains to be seen whether these changes are temporary and await the return to the US presidency of someone who believes in liberal hegemony, or whether the changes underway are the first in a series of upheavals that will progressively reshape the world order from unipolar to multipolar, with Europe clearly being one of the main poles.

0 thoughts on “Final Steps of the Multipolar Revolution: Containing the US in Europe”