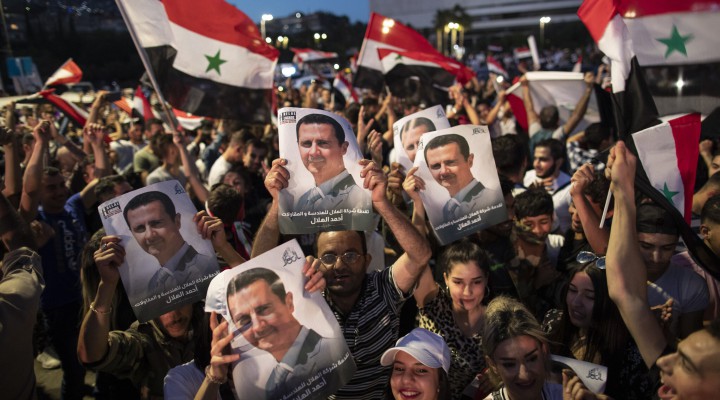 The Syrian presidential election was a celebration of victory in the face of external aggression. It confirmed the authority of Bashar al-Assad, not for his political ideas, but for his courage and tenacity as a warlord. The West, which lost this war, still does not accept it. Therefore, they consider this election as null and void. They persist in presenting the Syrian authorities as torturers and are unable to recognize their own crimes.

The Syrian Arab Republic has just held a presidential election despite the hostility of the West, which still wishes to both skin it and overthrow it in favor of a transitional government along the lines of Germany and Japan at the end of World War II [1]. The election was fair according to international observers from all countries with embassies in Damascus. Bashar al-Assad was overwhelmingly elected for a fourth term.

These data deserve some explanation. For the most part, this article could have been written in 2014, during the previous presidential election, as the positions of the West did not change at all despite their military defeat.

In 2010 (i.e., before the war), the Syrian Arab Republic was a state in strong demographic and economic development. Its president was the most popular Arab head of state, both in his country and in the Arab world. He walked with his wife, unescorted, anywhere in Syria. He was seen in the West as a positive example of simplicity and modernity.

When, on the basis of false information, the United Nations authorized the West to intervene in Libya, the Qatari channel, Al-Jazeera, asked its viewers for several months in vain to rise up in Syria against the Ba’ath party. After the fall of the Libyan Arab Jamahiriya under NATO bombs, armed groups destroyed symbols of the state and attacked civilians in Syria. As in Libya, dismembered bodies were found in the streets. Finally, at the call of Al-Jazeera, Al-Arabiya and the Muslim Brotherhood, demonstrations began against President Bashar al-Assad, usually on the sole grounds that he was not a “true Muslim” but an “Alawite infidel”. There was never any question of democracy, a concept that Islamists abhor. However, other demonstrations, organized by the PSNS, denounced the organization of the administration and the abusive role of the secret services. Soldiers of the Islamic Group fighting in Libya (GICL), who had just been brought to power in Tripoli by NATO, were transported to Turkey with their weapons by the United Nations as “refugees”, before founding the Free Syrian Army [2]. The “civil war” then began, while Western leaders chanted “Bashar must go!” (not “Democracy!”).

For two years, the Syrian population was confronted with two different narratives of events. On the one hand, the Syrian media denounced an external attack and did not report on the demonstrations against the organization of the state; on the other hand, the Arab media announced the imminent fall of the “regime” and the establishment of a government of the Muslim Brotherhood. In fact, a small part of the population supported this secret organization. The unrest claimed many more victims among the police and the army than among the civilian population. Gradually, Syrians realized that whatever wrongs the Republic had done, it was protecting them, not the jihadists.

During this three-year “civil war”, the jihadists, armed and coordinated by NATO from Izmir (Turkey), supervised by Turkish, French and British officers, occupied the countryside, while the Syrian Arab Army defended the population gathered in the cities. In 2014, the Russian air force intervened at Syria’s request to bomb underground facilities built by the jihadists. The Syrian Arab Army then began to reconquer the territory. It was also in 2014 that Nato encouraged the transformation of an Iraqi jihadist group into Daesh (i.e., the “Islamic State in Iraq and the Levant”) [3]. In one year the number of foreign jihadists fighting against the Syrian Arab Republic exceeded 250,000. It is therefore completely absurd to continue talking about a “civil war”.

As early as 2014 the Syrian Arab Republic created a Ministry of Reconciliation, under the authority of SNSP leader Ali Haidar. During the following seven years of war, the Republic worked to grant amnesty to Syrians who had collaborated with the invaders and to reintegrate them into society.

Today, the country is divided into four: most of it is controlled by the government in Damascus; the northwestern governorate of Idleb, where jihadists have regrouped, is under the protection of the Turkish occupation army; the northeast is occupied by the U.S. military and Kurdish militias; and the Golan Heights in the south is occupied by Israel, which annexed it unilaterally before the war.

The position of foreign powers

Under international law, Iran and Russia are legally present in Syria, while Israel, Turkey and the United States illegally occupy different parts of its territory.

The United States, which had assembled the largest military coalition in human history, under the paradoxical title of “Friends of Syria”, did not manage to keep them united. Gradually, each one has regained its autonomy and is pursuing its own objectives.

the United Kingdom sought to regain its imperial economic interests,

and France wanted to re-establish its mandate, as established by the League of Nations in 1922 [6].

After 10 years of war, the weapons having spoken, it is clear that the Syrian people want to keep their Republic and that it has passed into the orbit of Russia. In the short and medium term, the West will never be able to shape it as it pleases. One would therefore expect them to take note of their defeat and change their discourse. But this is not the case. In politics, as in science, doctrines do not disappear when they have been defeated or disproved, but only with the disappearance of the generation that bears them.

The West therefore persists in spreading false news and accusing President al-Assad and the Republic of being torturers, just as the Third Reich described Charles de Gaulle as a servant of the Jews and the British at the head of a band of mercenaries and torturers.

Just before the Syrian presidential election, Washington and Brussels agreed on their common position. According to them, this election is null and void because it is contrary to UN Security Council Resolution 2254. However, this text [7], adopted six years ago, makes no mention of the presidential election. On the contrary, it states that the future of Syria belongs to the Syrians alone and confirms the legitimacy of the Republic’s fight against jihadist groups. It so happens that this text was followed by negotiations in Switzerland between the various Syrian parties, and then in parallel in Russia. The delegations agreed to reform the Constitution, but never succeeded. Little by little, the Nato collaborators (the “opponents”) laid down their arms so that there were no credible delegates to continue the talks.

In 2010, there were 20 million Syrian citizens (as well as 2 million Palestinian and Iraqi refugees) living in Syria. In 2011, Turkey built new cities on its Syrian border and called on Syrians to settle there until peace returned to their country. In doing so, it implemented a Nato tactic [8] to deprive Syria of its civilian population. Subsequently, Turkey sorted out these refugees, using the Sunnis in its factories and sending the others to Europe. At the same time, many more Syrians fled the fighting to Lebanon and Jordan. There are now a total of 5.4 million registered by the UNHCR abroad.

Given the disorganization of the country, it is impossible to determine the exact number of war-related deaths. It is at least 400,000 Syrians, possibly many more, and at least 100,000 foreign jihadists. The number and nationality of the inhabitants under Turkish or American control are also unknown. The West has been constantly putting out preposterous figures during the war. For example, they spoke of a million “democrats” in Eastern Ghouta, but when it fell in 2013, there were only 140,000 people (90,000 Syrians and 50,000 foreigners). The figure of 3 million inhabitants in the occupied areas, given by the West, is probably no more valuable.

In any case, the Syrian Arab Republic estimates that there are currently 18.1 million Syrian citizens. But many people have not given any sign of life to the Syrian authorities and may still be living as refugees abroad.

Westerners, forgetting their demographic tactics and intoxicated by their own propaganda, are convinced that the refugees have fled their country to escape the “dictatorship. Yet the presidential election at the embassy in Lebanon gave rise to improbable demonstrations of victory over foreign aggressors and loyalty to the Republic. The vast majority of Syrian refugees kept claiming that they had not fled the “regime” but the jihadists. The same scenes had taken place in 2014.

The candidacy of Bashar al-Assad

Contrary to popular belief, Bashar al-Assad did not inherit the Syrian presidency. He did not intend to be a politician and moved to London in 1992, where he lived as an ophthalmologist. He was dedicated to serving his patients, refusing to open a practice only for the rich and preferring to work at the hospital for all. However, after the death of his brother Bassel, he agreed to return home and attend a military academy. In 1998, his father appointed him as the head of the Syrian Computer Society, then entrusted him with diplomatic missions. When President Hafez el-Assad died, Bashar was not a candidate for his succession, but a period of uncertainty opened up for the country. It was under pressure from the Ba’ath party that he accepted the presidency of the Republic, a decision confirmed not by an election but by referendum.

As president, he set out to liberalize and modernize his country. He behaves in these times like all European leaders, neither better nor worse. But in 2011, when his country is attacked and the West offers him privileges if he agrees to leave, he does not bend, but revolts. The Assad family (“Lion” in Arabic) is known for its sense of duty and its mastery of fear. This man like the others will prove to be an exceptional leader. Like Charles De Gaulle, he went from being an ordinary man to the liberator of his country.

The presidential election of 2021

Syrian law states that only citizens who have remained in the country for the past ten years, i.e., during the entire war, are entitled to run for office. This is a way to disqualify those who went to sell themselves to the West. Also, only three candidates have run for the 2021 presidential election. The candidates had the opportunity to highlight the social problems created by the war and to discuss ways to solve them.

But the election itself could only be a plebiscite; an expression of the nation’s thanks to the man who saved it. 76.64% of registered voters cast their ballots. 95.1% of them chose Bashar al-Assad. This is much more than in 2014.

Everywhere the crowd celebrated the victory. It was as much that of the presidential election as that of the war against the invaders.

Westerners do not recognize it. They are haunted by the memory of their own crimes that they try to hide: most of the houses, entire cities, are now nothing but piles of ruins, 1.5 million Syrians are disabled and at least 400,000 are dead.

Thierry Meyssan lived from 2011 to 2020 alongside the Syrians, under the bombs of NATO and Israel, under the attacks of Al-Qaeda and Daesh. He has devoted an authoritative book, Before Our Very Eyes, Fake Wars and Big Lies: From 9/11 to Donald Trump, to Western strategy in the Middle East and particularly to the war against Syria.

0 thoughts on “Presidential election in the Syrian Arab Republic”