HOME / WORLD / Open letter from retired military: a plot against the Republic?

Open letter from retired military: a plot against the Republic? 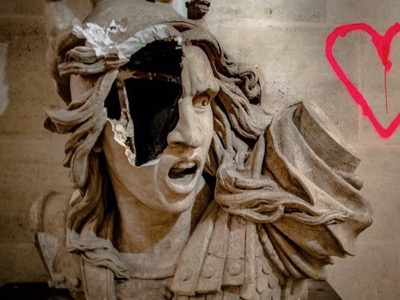 In three years, France has gone through two major crises that have not been answered: the questioning of globalization by the Gilets jaunes and the disintegration of the State by the police unions. Neither of them has received a substantial response. If the observations of these whistleblowers are shared by all, it becomes impossible to share them publicly. Democracy does not die from the absence of contradictory debates but, worse, from the erection of taboos.

The Yellow Vests against globalization

Two weeks after the beginning of the demonstrations, unidentified groups infiltrated the movement to sabotage it from within. Thus, while for 15 days all the demonstrators proudly waved the French flag and sang the Marseillaise -something not seen in popular demonstrations for fifty years-, hooded thugs dressed in black vandalized the Arc de Triomphe and especially the sculpture of the Marseillaise. The trial that followed showed that this group of unidentified provocateurs had no connection with the Gilets jaunes who were the only ones arrested.

In the absence of a leader able to condemn this intrusion, the Yellow Vests movement slowly weakened for a year. Its questions did not disappear, however.

In the past, politicians created “Theodule Commissions” to drown out the problems they did not want to see. President Macron invented a “Great National Debate” for the same purpose, in the age of continuous information media. Everyone spoke, but no one received a relevant answer, neither from the Executive nor from the Assembly.

The police against the disintegration of the nation

A second alert has just taken place. This time the problem is the absence of the 3rd Right of Humans and Citizens of 1789 – not to be confused with the “Rights of Man” in the Anglo-Saxon sense -: security. That is to say, the capacity of citizens to exercise their imprescriptible rights of freedom and property. Indeed, we do not observe a general increase in delinquency, but an increasingly strong geographical disparity. If the citizens of the VIIth district of Paris do not feel threatened, those of the XVth district of Marseilles can permanently fear to be attacked by delinquents. At the same time, the police who should be defending them have changed their function. They are reluctant to enter certain neighborhoods where they are attacked more and more often. Many police officers reasonably fear for their lives: a dozen of them die on duty every year. As a result, some of them are slowly becoming agents of repression of the political opposition. Thus, in many cases, police officers have used disproportionate force against the Yellow Vests and, now, against opponents of health policy. Although these cases are not so numerous across the country, they attest that this is not an accidental, but a deliberate direction, supported at the top of the state.

For the time being, police officers remain attached to a republican training, that is to say, at the service of all and not only of the political authorities. Their unions are multiplying alerts in this sense and denounce the conditions of recruitment of their young colleagues. Indeed, people with psychiatric backgrounds and petty criminals are admitted to police schools today.

The presidential election of 2022

This second movement, after the Yellow Vests, comes at a time when the country is preparing for a new electoral campaign: in May 2022, it will have to designate the President of the Republic. Already, two thirds of voters do not want President Emmanuel Macron to run again.

Given the failures of Nicolas Sarkozy and François Hollande, both at the end of their first and only mandate, Emmanuel Macron can only hope to obtain a second mandate by responding to popular expectations. The one expressed by the Yellow Vests against globalization and the one expressed by the police unions against the retreat of the Republic, i.e. of the General Interest. Not having any intention to subscribe to it, President Macron can also try an electoral maneuver:

artificially multiply the candidacies and discredit the candidates likely to win the first round, with the exception of one that he will have chosen, so that he will be facing him in the second round.

to organize a second round against Marine Le Pen, whom he will have demonized, and to force the majority of his opponents to vote for him rather than for her in the name of a “Republican front” against fascism.

This strategy worked in 2002 for Jacques Chirac (82%) against Jean-Marie Le Pen (17%). Today it is risky, as Marine Le Pen does not have the image of a fascist like her father, but of a republican. The Élysée is therefore looking for opportunities to turn her into a repulsor.

The appeal of the former military

It so happens that some former military personnel have written an “Open letter to our leaders” in which they underline the current disintegration of institutions and denounce in advance a possible recourse to the army, which they consider inevitable, to resolve the question of security. This appeal was published on their website, Place d’armes, on April 13, 2021. The right-wing weekly, Valeurs actuelles, reprinted it, not in its columns, but on its website, on April 21. Marine Le Pen, who said she had long shared the diagnosis of these former soldiers, then invited them to vote for her in May.

The Élysée deemed this a good opportunity and sent its ministers, one by one, to the media to denounce a “quarteron of retired generals” who, according to them, are calling on their fellow soldiers to perpetrate a military coup. All of them pretended to date their call to April 21, not April 13, so that they saw it as a factious attempt fifty years to the day after the Algiers generals’ putsch against Algerian independence. Finally, they denounced Marine Le Pen’s fascination with “the sound of boots”.

Aware that he could hope to do better than Emmanuel Macron in the first round of 2022, the leader of France insoumise, Jean-Luc Mélenchon, took the matter to the public prosecutor to have the “factious generals” convicted. Indeed, Jean-Luc Mélenchon had come in third place in the first round of the last presidential election (19% of the vote, against 21% to Le Pen and 24% to Macron).

The place of the military in the public debate

We invite our readers to read the text of this Open Letter [2] and see for themselves that it is much ado about nothing.

A “state of emergency” is the term used to describe the possibility for the government to call in the army to maintain order. However, the military are not trained to do this and their intervention risks causing human losses that only the police and gendarmes are trained to deal with. In 2005, in 2015 and again in 2017, governments have decreed this. Even today, nearly 10,000 military personnel may be required as part of “Operation Sentinel” to protect citizens from terrorist risks. The same is true in Belgium and the United Kingdom.

In addition, article 36 of the 1958 Constitution provides for the possibility, as a last resort, of transferring police and law enforcement powers from the Ministry of the Interior to the army. This is the “state of siege”. It has never been implemented under the Fifth Republic, even during the coup d’état of the generals in 1961.

The Government and France insoumise point out that the Open Letter of the former military never mentions that they are within the constitutional framework and thus insinuates their putschist will. This is a very bad trial of intent. Nothing, absolutely nothing, allows one to accuse these former soldiers of factional intentions.

All this hullabaloo has only served to draw attention to this text. More than 10,000 former military personnel have signed it, including some thirty generals. The question it poses is now evaluated by all and the inaction of the governments -all parties included- is glaring.

The Minister of Defense announced that she would sanction the signatories. The opprobrium intended for Marine Le Pen now affects the people she was addressing.

Only 18 out of 10,000 are still active. They are in danger of being struck off for failure to comply with the duty of confidentiality. Retirees, on the other hand, enjoy full freedom of expression. They can only be reprimanded for sounding the alarm, but it would be surprising, to say the least, if these 10,000 men were collectively sanctioned for their legitimate civic expression.

The military, whether active or retired, are no longer subjects, but citizens like any others. Following the Algiers putsch, President Charles De Gaulle initiated a profound reform of the armed forces. The soldiers who had refused to obey the putschist generals were indeed punishable for failure to obey orders. General De Gaulle, who had himself refused to obey his superior, Marshal Philippe Pétain, in 1940 and had created Free France, had introduced the distinction between what is “legal” and what is “legitimate”. The Defense Code was therefore modified. It does not allow soldiers to choose sides, but obliges them to refuse illegitimate or dishonorable orders and to arrest their superiors if they engage in such acts. There is therefore no plot against the Republic. No factious conduct.

The signatories of the Open Letter rightly asked to “speak as equals” with their chief of staff who insulted them. Every soldier, active or retired, has such a right as a citizen. This right is the corollary of their obligation to Obey and Serve.

By calling the signatories of this Open Letter “factious”, the Minister of Justice, Eric Dupond-Moretti, has exposed himself to criminal prosecution. The former lawyer was not arguing in a courtroom. He is therefore responsible for his words.

The fact that some of the 10,000 signatories are members or close to Marine Le Pen’s party, the Rassemblement National, itself a product of the historic party of former collaborators of the Nazis and the Algiers putschists, the Front National, does not authorize her to be condemned, nor does it authorize them to be collectively condemned. In the Republic, there is no hereditary or collective guilt. All are French citizens by right. Not only have none of them been struck with national indignity, but many have served their country with glory.

In their diagnosis, the former soldiers were not content to denounce the Woke rhetoric that inhibits the use of the public monopoly of violence, nor the ideology of political Islam. They also expressed their dismay at the anti-republican use of law enforcement against the Yellow Vests by the authorities. The disproportionate reaction of the State to their Open Letter shows that they have hit the nail on the head.

We are witnessing an inversion of values that makes men judged by the media -and perhaps tomorrow by their military corps- not for what they have done, nor even for what they think, but because they pose a diagnosis to which all subscribe and that few dare to state aloud.

The political discourse has progressively moved away from the realities. It is now entering a murky zone where, as in certain Polynesian societies, what is not mastered becomes taboo. Not only has the “circle of reason” been trying for thirty years to forbid contradictory opinions, but now it is trying to forbid the discussion of certain subjects.

When the first three rights of man and citizen are lost – freedom, property and security – the fourth one intervenes: “resistance to oppression” (article 2).

The slow disintegration of the Republic in France

The French suspend their Liberty

Covid: a curfew for what?

0 thoughts on “Open letter from retired military: a plot against the Republic?”