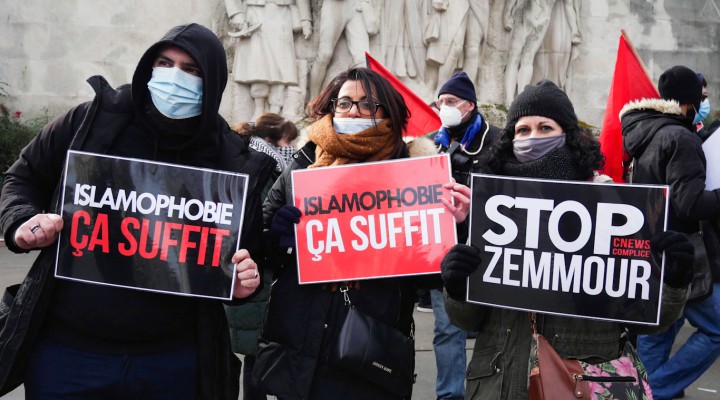 Islamo-leftism is a label coined by the far-right, with many pointing out the distinct similarities between it and “Judeo-Bolshevism,” a term created by German Nazis linking religion with a set of political beliefs. Yet it has quickly been taken up by many in France’s political center.

MPN- France’s Minister for Higher Education, Frederique Vidal, has sparked a nationwide controversy with her announcement that the government is attempting to stop the spread of what she called “Islamo-leftism” in universities. Part of the process, she said, would be for the state to decide “what is academic research and what is activism and opinion,” implying that academics would need government permission to research and write on topics deemed too politically sensitive.

Vidal singled out post-colonial studies as a particularly problematic area. “I think that Islamo-leftism is eating away at our society as a whole, and universities are not immune and are part of our society,” she said, warning that France was importing American “woke culture.”

Her comments provoked serious pushback from academics labeling the government’s move a massive blow against freedom of speech, with the subject trending on French Twitter.

Islamo-leftism is a label coined by the far-right, with many pointing out its distinct similarities with “Judeo-Bolshevism,” a term created by German Nazis linking religion to a set of political beliefs. Yet it has quickly been taken up by many in the political center. Le Figaro, France’s best-selling newspaper, ran a frontpage headline last week titled “How Islamo-leftism is infecting universities.” Like the U.S., France is currently grappling with its own legacy of colonialism and racism.

In parliament, the French University minister pledged to review all research carried out in academia, ‘notably in the domain of postcolonial studies’. This is an unbelievable attack on academic freedom on the part of a democratically elected government. https://t.co/F5oWSMkBSI

Embattled president Emmanuel Macron has faced widespread opposition to his rule since his election, notably to his austerity policies, which provoked the largest strike since those of May 1968; a fuel tax that sparked the Yellow Vest movement; and his government’s handling of the COVID-19 crisis, which has led to the deaths of nearly 83,000 people.

France: Riot Police Beat up Striking Firefighters as Media Looks the Other Way

Macron was comfortably elected in 2017 after fascist candidate Marine Le Pen made it into the final runoff against him. However, the election was marred by widespread abstention and he has struggled with low approval ratings ever since. And while many breathed a sigh of relief that France had been saved from a racist president, Macron has constantly leaned towards xenophobia and the scapegoating of the country’s 5.7 million Muslims in particular. He has used the country’s secular tradition as an excuse to ban Muslim headwear, including burqas, leading to police arresting Muslim women or even forcibly removing their face coverings in public. Macron also introduced new “Islamist separatism” legislation that would curtail civil liberties, playing into the far-right’s conception of a Muslim threat.

In a televised debate last week, Interior Minister Gérald Darmanin even attacked Le Pen from the right, claiming that she was “too soft” on Muslims. A visibly surprised Le Pen was put in the position of defending civil liberties and Islam from the government. “I am strongly attached to our French values; I want to conserve total freedom of religion. That’s my opinion,” she said. With one year to go before the next presidential election, polls show Macron and Le Pen neck-and-neck.

An exchange from a televised debate in France has gone viral after France’s interior minister called far-right presidential candidate Marine Le Pen “soft” when dealing with Islam in France. pic.twitter.com/awODaJwn1C

France has long carried out questionable policies regarding race. In 2010, the government expelled over 1,000 Romanian and Bulgarian Roma gypsies precisely because of their heritage. In doing so, it broke European Union law, which states that citizens of all member states have the right to live and settle wherever they like in the EU. A French court also banned the use of non-standard letters (such as ñ) in baby names, meaning that a number of celebrated names of Basque and Breton origin (two groups historically persecuted by the central government) were made illegal overnight.

It is not just in France where the government is attempting to interfere in education to stifle unwanted debate. As of 2020, schools in England are prohibited from using material from writers who have expressed anti-capitalist opinions. Meanwhile, Viktor Orban’s Hungarian government chose to outright ban the teaching of gender studies at universities.

Macron’s En Marche party appears to be attempting to undermine Le Pen’s support base among France’s white working class. Committed to neoliberal austerity politics, it is incapable of providing them with material gains. However, it can fall back on an appeal to the nation’s reactionary side by offering a harsh crackdown against the country’s Muslim population. Stoking fears of a supposed Islamist takeover of universities could be one way to do it.

France: Riot Police Beat up Striking Firefighters as Media Looks the Other Way

0 thoughts on “As Macron Courts the Far-Right, France Launches Crackdown on “Islamo-Leftism””