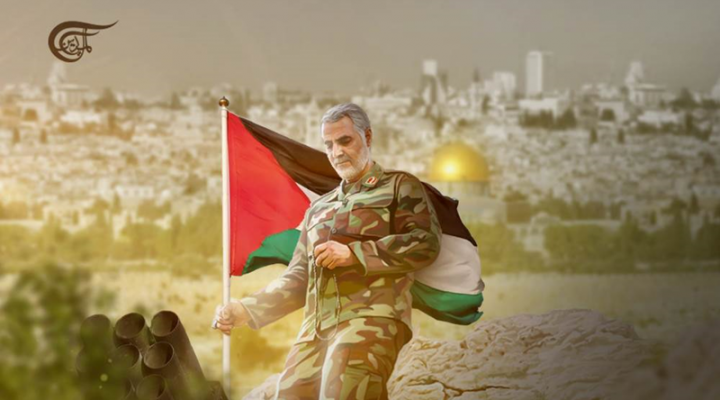 Batool Subeity- Soleimani became more well-known during the last years of his life, but his huge efforts behind the scenes in strengthening the Palestinian resistance formed the greater part of his life in the past two decades.

In February 1998, Major General Qassem Soleimani was appointed as commander of the Quds Force by Ayatollah Khamenei, tasked with extraterritorial operations that support resistance factions fighting a common regional enemy. This has centred on foiling the American imperialist tools for the region, notably the Zionist regime and ISIS.

Soleimani became more well-known during the last years of his life, but his huge efforts behind the scenes in strengthening the Palestinian resistance formed the greater part of his life in the past two decades.

‘He did not differentiate between sects and ideologies, only between the factions who wanted to fight the occupation and who would surrender.’ (Abu Ahmad Fuad – Deputy Secretary of PFLP)

Soleimani quickly opened the Palestinian and Lebanese resistance files, leading the coordination between the Quds Force and Palestinian factions across the board, from Hamas, Palestinian Islamic Jihad (PIJ), both Popular Front for the Liberation of Palestine (PFLP)-General Command and PFLP, the Popular Resistance Committees (PRC), such that there was a coordinated strategy and each fraction wasn’t acting separately.

‘We felt he was someone distinguished, who would follow things up directly and constantly- asking about the problems, issues and needs of the resistance, drawing out various scenarios.’ (Ziad Nakhalah – Leader of PIJ)

In 1999, Soleimani arranged for the visitation of Sheikh Ahmed Yassin (founder of Hamas) to Iran, where the key milestones of the next future phase were drawn. Soleimani’s focus was on how to strengthen the resistance capabilities and enter the phase of liberation.

That year, it leaked to the public ”Israel’s” intention to withdraw from Lebanon. The main discussion centred on how the effect of ”Israel’s” withdrawal could be transferred into Palestine itself.

In September 2000, Ariel Sharon stormed Al-Aqsa Mosque which led to widespread protests. It was this moment that Soleimani and the factions were waiting for. It was decided to establish a working committee between the Quds Force, Palestinian and Lebanese factions, spearheaded by Soleimani, with the objective of developing the intifada, turning theory into tangible action.

‘Meetings happened from the first day, centred on how to deal with this intifada as a strategic project in facing the occupation. There were weekly meetings Soleimani would always attend and listen to the ideas. Never once was an idea put forth except he expanded on it.’ (Osama Hamdan – senior representative of Hamas in Lebanon)

Soleimani worked hard on the plot to move weapons into Gaza and many means were used for this. Countless videos were produced, teaching the resistance fighters on how to use individual weapons and explosives, in addition to learning how to manufacture bombs.

‘Any Palestinian faction, under the title of requiring weapons for resistance – Hajj Qassem did not show fault in shipping weapons.’ (Osama Hamdan – senior representative of Hamas in Lebanon)

Despite the deep disagreement between Iran and Yasser Arafat over the Oslo Accords, when Arafat asked for weapons, 45 tonnes of Iranian manufactured weapons were sent in a ship called Karine A, which “Israel” later intercepted.

‘Iran sent 20 ships full of weapons to the West Bank and Gaza. Most people do not know about these ships’ – (Talal Naji – leader of PFLP-GC)

In 2004, Sheikh Ahmed Yassin was killed. In Damascus the same day, in the headquarters of Hamas condolences were held. Soleimani came up after a few hours and brought forth a letter from Ayatollah Khamenei stating, ‘this martyrdom is a loss for us all and an honour for us all’. Soleimani stressed the big difference in the role, action and influence of the resistance when Yassin visited Tehran in 1998, compared to his assassination in 2004. The same year, Yasser Arafat was poisoned by an Israeli intelligence operation.

The discussion arose in the Zionist regime as to how they want extinguish the intifada. On the 25th of August 2005, Gaza was liberated, and “Israel” unilaterally withdrew. By then, hundreds of “Israel” soldiers were killed whilst resistance capabilities were strengthened. Occupation settlers fled the strip. “Israel” thought it got rid of the burden of Gaza, but it did not anticipate how their withdrawal would pave the way for coordination and development of the resistance across the board.

Soleimani had no other priority except the Palestinian file during the 33-day war in Lebanon. He predicted that the war was coming into Gaza. For that reason, he asked the Islamic Resistance in Lebanon to give the Palestinian factions everything they had- even some weapons that weren’t used in the July war, for this purpose. All 20 years encompassing Lebanon’s experience was being transferred, starting from training the fighters on tactical planning process of administrating the battle, on commander and squad levels.

The prisoners were considered a priority; hence the resistance began capturing occupation soldiers to release Palestinian prisoners. Most operations were not successful; however, Gilad Shalit was captured in June 2006 and was held captive for five years, as part of a prisoner exchange deal.

In late December 2008, the resistance factions faced Israeli aggression on Gaza from their garrison in Damascus, where Soleimani spent the full 22 days alongside the factions strategizing with a detailed map of Gaza, where he began dissecting the reality on the ground.

The objective of ”Israel’s” offensive was to destroy the resistance capability in Gaza and get the Palestinian Authority back in power, and to protect its illegal settlements in the North, trying to re-capture the imprisoned Israeli soldier Shalit. Israeli aggression ceased without achieving any of these objectives.

This war presented an opportunity to experiment resistance capabilities that began in 2000 and were strengthened with the liberation of Gaza in 2005, transforming the “weak” strip to one of ”Israel’s” most overarching objectives.

Not only did Soleimani transfer weapons, but it was decided under his supervision that Gaza should develop the ability to manufacture its own weapons, including rockets. He also shared with the Palestinian Resistance his military experience and opened pathways to success by teaching the factions tactics they couldn’t reach before, whether from Iran or elsewhere, building the infrastructure required to manufacture their own weapons.

‘All security experts considered the idea of forming a rocket under occupation as non-comprehensible. Nations on the map can’t manufacture a bullet and we’re thinking of producing a rocket?’ (Osama Hamdan – senior representative of Hamas in Lebanon)

Soleimani met with the Palestinian factions in the wake of the ‘Arab Spring’ and explained his vision in 2011 that America and “Israel” wanted to create chaos to target the resistance front. He was very open to what they had to say.

‘Soleimani stated, “Just focus on Palestine and don’t let what is happening in Syria negatively affect you.” And he never once required a stance from Hamas regarding Syria. (Osama Hamdan – senior representative of Hamas in Lebanon)

When the coup of Morsi occurred in Egypt on 2013, a delegation of two Palestinians visited Soleimani and he explained what the unfolding events signify for the Palestinian resistance.

‘You would have expected Soleimani to say, “we told you so and so was true”, but the moral dimension that Soleimani displayed was very high. He did not even make an inference to Hamas’s position on the matter) and simply explained the position of Ayatollah Khamenei.’ (Osama Hamdan – senior representative of Hamas in Lebanon)

Soleimani oversaw the development of tunnel networks that could effectively transport weapons. He directly approached several countries urging them to help export these weapons, such as the military complex in Khartoum, Sudan which “Israel” bombed in 2012 under this pretext. These weapons were travelling hundreds of kilometres and Soleimani oversaw the full process, until they reached the border of the Gaza strip. Whilst one missile cost $20,000, and hundreds of missiles were exported.

“Israel” launched the war on Gaza in 2014 to destroy the tunnels and the resistance weapons. Soleimani focused on increasing the precision, target and impact of the rockets. As a retaliation, the resistance hit the heart of “Tel Aviv.” In the non-direct negotiations that occurred in Egypt, one of ”Israel’s” demands was for Hamas to stop using tunnels, but they did not, signifying the magnitude of harm they posed to the occupying regime.

After the war, Soleimani worked on rebuilding the infrastructure of the resistance ‘in the shortest amount of time and within less than a year, it was better than previously.’ (Osama Hamdan – senior representative of Hamas in Lebanon)

If a US national hero was killed, we’d feel like Iran on Soleimani

0 thoughts on “Soleimani’s effective role in Palestine, from resistance to liberation”