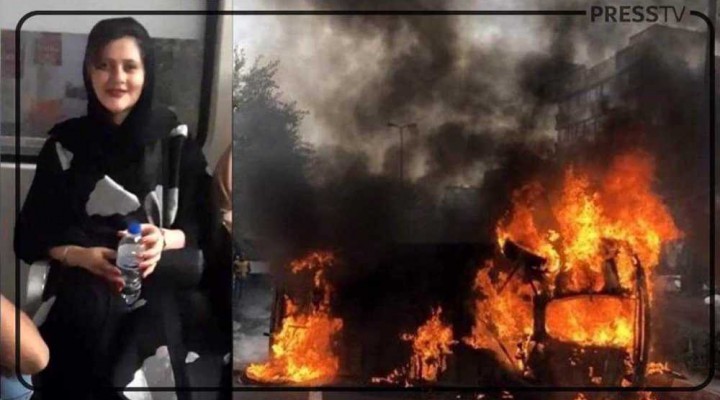 Hiba Morad- Mahsa Amini, a 22-year-old Iranian woman, died in police custody last week. Every Iranian I have met so far this week – men and women, practicing and non-practicing Muslims, hijabis and non-hijabis – everyone feels sad about what has happened.

The tragic incident that took place last Friday prompted Iranians to pour into the streets in anger over her mysterious death, with calls for ‘justice’ growing louder across the country.

In response to public anger, the government immediately ordered a high-level investigation into the incident, with President Ebrahim Raeisi personally assuring the deceased lady’s parents of justice.

However, the peaceful and legitimate protests were soon hijacked by hoodlums and trouble-makers, going on the rampage in Tehran and other major cities, damaging public property, torching ambulances, attacking Hijabi women, stabbing policemen and causing chaos.

It soon became obvious that the objective of these demonstrations was not justice or accountability for the young woman but to wage war against the Islamic Republic of Iran.

That’s precisely why it grabbed headlines in the mainstream Western media, reviving calls for “regime change” in Iran, the calls that have for the past four decades failed to break the spirit of Iranians.

This is not the first time protests in Iran have been hijacked by thugs to push their nefarious agendas.

Walking down the relatively empty Kargar Street in Tehran the other day, I came across an old friend, an employee at the University of Tehran. She didn’t appear happy with the turn of events. She said what happened to Amini was sad, but the vandalism that followed was unjustifiable.

“This is disgusting and I am really disturbed seeing all this. These are gangs of thugs hell-bent on disturbing peace and security. It has never been different though,” she told me, shaking her head.

I have known Cheshmbarzamin for a few years now. Sporting a relaxed Hijab, she said she was unable to understand or make sense of what had happened.

“A bunch of thugs hit the streets to burn and destroy property and scare people. We all as Iranians do not want this to happen and I tell you these are not protests, these are rather violent riots,” she told me. “I am sure most Iranians do not agree with what is happening.”

She asked me if streets towards the South were clear, and bade me goodbye. I was not present myself at the protest sites, but videos circulating online showed gory violence and vandalism.

It clearly appeared to be a systematic, carefully-orchestrated sabotage of public property.

Streets in the area were packed with policemen. I couldn’t resist the urge to talk to people. I asked a policeman, seemingly in his 50s, about the situation and whether it was getting worse.

His answer was: “We are here to preserve security, my daughter. Do not worry. We have to be patient with these young men and women. We are all sad about what has happened.”

This is not the first time such violent protests have erupted in Iran. In 2018, I witnessed first-hand how unruly mobs attacked and burned bus stations in Ferdowsi square in central Tehran.

It was extremely scary and sad. The videos of the sabotage went viral that night.

This time the protests erupted in reaction to Amini’s death and soon gave way to mob violence. Videos circulating on social media show different facets of violence perpetuated by the rabid mob.

One of the videos showed protesters jumping on a civilian car and banging it violently. In another video, they were seen attacking a lonely woman, beating and forcing her to take off her hijab.

Another video showed how some hoodlums set a police officer on fire and started cheering and clapping around him. As he started running, some others rushed to put off the fire that had engulfed him.

Some other videos showed how these unruly mobs burned public property and torched hospital ambulances and police cars. The Iranian health ministry spokesman announced on Thursday that 61 ambulances had been damaged in the riots, incurring huge losses to the state exchequer.

While Amini’s tragic death has received widespread media coverage across the world, some other horrific crimes in other countries have gone largely unnoticed.

Let us skim through some recent incidents.

In August, Mable Arrington, a 42-year-old African American woman, was shot and killed by trigger-happy American police officers. The shooting happened outside an apartment complex in Biloxi, Mississippi. Details of the incident were never made public.

Earlier this week, US troops killed Zainab Essam Majed al-Khazali, a 15-year-old Iraqi girl, during military drills in Abu Ghraib area, west of Baghdad, when she was helping her father in their farm.

The questions that flash to mind are: Did mainstream Western media cover these two incidents as passionately as it did the death of Iran’s Mahsa Amini? Was Zainab Essam’s murder not tragic enough to merit coverage? Did the Western media attempt to cause what seems to be a systematic and programmed noise to sabotage the image of a country or cause unrest?

Why are there definitive judgments even before investigations conclude? Why all this brouhaha about Iran, the Iranian government, the Islamic Revolution, and women’s rights, while deafening silence on gross human rights abuses committed by US forces worldwide?

The way these two stories were treated by the mainstream Western media reveals a hidden agenda, which goes beyond human rights and justice. While Amini’s natural death grabbed headlines across the world, Essam’s broad daylight murder by US troops in Baghdad was consigned to oblivion.

Unlike the US which tried to push Essam’s murder under the rug, there has been no attempt by Iran to dismiss or disregard what happened to Amini. President Ebrahim Raeisi immediately ordered a probe into the cause of her death; hours after the news broke out last week. The judiciary chief and parliament speaker also ordered separate inquiries into the incident.

CCTV footage released by the police showed Amini collapsing without any physical altercation or force. Amini’s story has been contextualized to fit an anti-Iran Western narrative and reflect the belligerent Western narrative to smear the Middle Eastern country.

The footage shows Amini, who had been taken to a police station in Tehran to receive educational training on Hijab and dress code rules, suddenly collapsing and then put into an ambulance to be transferred to the hospital.

The video dismissed claims that she was beaten up, ruling out any physical contact against her.

Dr. Massoud Shirvani, a neurosurgeon, told IRIB TV2 television channel that the deceased woman had surgery for a brain tumor at the age of 8 and that she was receiving hormone treatment.

Three other doctors also confirmed that according to a CT scan of Amini’s brain, there was no sign of being hit or exposed to beating, dismissing run-of-the-mill conspiracy theories.

Even though medics confirmed she was not beaten, CCTV footage showed she collapsed on her own, the government launched an investigation into the case, and Western corporate media has gone berserk in blowing it out of proportion, falsely accusing Iran of human rights violations.

This clearly illustrates that Amini’s case is being used as a cover for a wider, sinister agenda.

It is no coincidence that on August 18, John Bolton, the former US national security advisor, said that the key (to regime change) is the Iranian people, who are a threat to the “regime”.

Bolton made the statement at a conference organized by Albania-based anti-Iran terrorist group MKO in Washington. At the same event, former deputy commander of US European Command Robert Joseph echoed Bolton’s words, saying the key here is the Iranian people.

Yonatan Freeman, professor of political science at Hebrew University in Jerusalem, was also quoted as saying in early September that the Israeli regime is not happy with the revival of the nuclear deal. He said one of the options for Israel was to support, secretly or publicly, the so-called Iranian “opposition” in its attempt to topple the incumbent government in Tehran.

The list of public statements and positions is galore, all of which will be out in the public domain one day in the form of document leaks or memoirs of former officials.

US Senator Joe Lieberman for his part stated that the Iranian government will never change its behavior, so the policy should be to support “regime change”, which means “supporting the people of Iran, including the NCRI.”

In October 2021, former US vice president Mike Pence described the MKO as “a well-organized, fully prepared, perfectly qualified and popularly supported alternative” to the government in Iran.

In 2012, NBC reported that Israel has used an Iranian “opposition group” to carry out those much-publicized assassinations of Iranian scientists.

In the same year, the New Yorker reported that MKO was provided with extensive training by the US Defense Department’s Joint Special Operations Command (JSOC). According to the report, group operatives were taught how to intercept telephone conversations and text messages inside Iran, which were then translated and shared with American intelligence officials.

Olsi Jazexhi, Albanian historian and journalist clarified it in March 2022. The journalist said in an interview that Zionists, the US, and the UK support the terrorist group to destroy Islam and Iran.

“MKO is an Islamophobic and terrorist cult like ISIS, Al-Qaeda or Jahbat al Nusra… These cults denounce political Islam, the struggle for decolonization of Muslims, demand for the separation of religion from politics, ask for the secularization of Muslim societies and want to violently de-Islamize the Muslim world,” he was quoted as saying.

The MKO has carried out numerous assassinations and bombings of top-ranking Iranian officials since the 1979 Islamic Revolution. The terrorist group also fought alongside Iraqi forces in the former Iraqi dictator Saddam Hussein’s war on Iran in the 1980s. However, the US and the European Union removed it from their lists of terrorist organizations in order to use them as proxies against Iran.

As the West tries to exploit Mahsa’s name to spark unrest in Iran, her soul probably is struggling to rest in peace. Change is not bad, but change does not have to be in line with Western norms.

At the end of the day, the West preserves its Machiavellian tactics to dominate, but 87 million Iranians will not put their security at stake. They will not allow hundreds of foreign-propelled protestors to run amok, which was on full display on the streets of Tehran and many other cities across the country on Friday with people in unanimous voice saying no to “regime change” thugs.

Hiba Morad is a Tehran-based academic and political analyst, currently pursuing a PhD in linguistics at the University of Tehran.

What is Really Behind Iran’s Unrest?