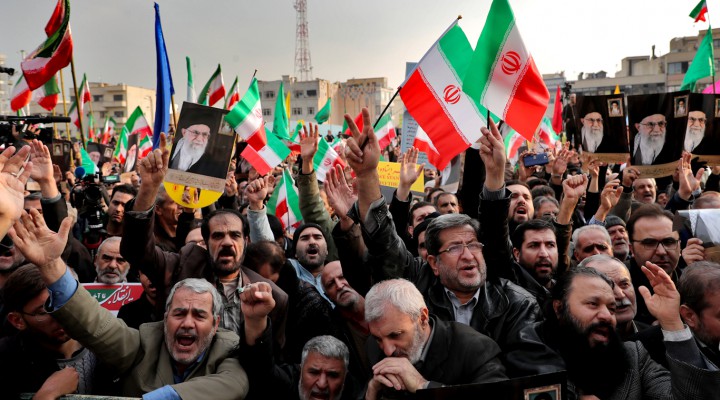 The US gov’t has long attempted to foment popular uprisings and hijack or manipulate protests in Iran, now rights groups like Amnesty International, seem to be parroting the tactic.

MPN– The U.S. government has lent its full support to anti-government protesters in Iran. “The United States is with you,” announced Secretary of State Mike Pompeo. Vice President Mike Pence was similarly emphatic.

As Iranians take to the streets in protest, the Ayatollahs in Tehran continue to use violence and imprisonment to oppress their people. The United States’ message is clear: the American people stand with the people of Iran.

Meanwhile, President Trump offered condemnation of the Iranian government’s actions; “Iran has become so unstable that the regime has shut down their entire Internet System so that the Great Iranian people cannot talk about the tremendous violence taking place within the country,” he tweeted. Yet even as the U.S. government was announcing its endorsement of events, their Iranian adversaries were claiming victory over the demonstrators. At a cabinet meeting in Tehran, President Hassan Rouhani claimed,

The Iranian people have again succeeded in an historic test and shown they will not let enemies benefit from the situation, even though they might have complaints about the country’s management.”

Widespread, peaceful protests originally flared up on November 15, after an unexpected overnight tripling of fuel prices. However, these were soon overtaken by more militant, violent confrontations with security forces. Over a dozen gas stations and more than 70 banks are reported to have been destroyed. The proceeds from the price hike were reportedly intended to subsidize low-income Iranians, although the reasons for the increase were not explained, leading to a public outcry.

Amnesty International reports that at least 115 protestors have been killed in the violence, and puts the blame squarely on Iranian security forces, suggesting the final death toll may be “much higher.” The Iranian government rejects these figures, claiming only a handful of people have died, including at least four members of government security forces at the hands of rioters. Inside the country, the Internet was shut down for over a week, adding to the confusion.

Protestors burn down the Central Bank In Behbahan, #Iran. This violence has more to do with than a simple gas price hike. The Iranian people are fed up with the Islamic Republic. pic.twitter.com/nPcrC6rQo2

Across the Western media, the events have been described as a government “crackdown” (e.g. BBC, CNN, LA Times). And for Fox News, the fact that the Iranian government is trying to “squash” the “massive protests” is proof that it is losing its grip and is afraid of its own people.

Yet others have not seen it like this. Mohammad Morandi, a professor at the University of Tehran, draws a distinction between what he sees as the legitimate, peaceful, anti-fuel increase protests and the “very well organized and very violent” demonstrators who immediately destroyed banks, ambulances and public services, “egged on” by international media such as the government-subsidized BBC and Voice of America.

Others have criticized Amnesty for failing to be a neutral actor in the conflict racking the Islamic Republic. Ben Norton, Assistant Editor of the GrayZone, for instance, condemned Amnesty researchers for appearing on Saudi-backed media and on U.S. government mouthpiece Voice of America, both of which have been pushing for regime change in Iran for some time. Norton claims that Amnesty is becoming little more than a “tool of US imperialism.”

Here's an Amnesty International researcher demonizing Iran on an opposition propaganda network reportedly funded by the Saudi monarchy, while the Trump admin is openly trying to overthrow Iran's gov.

These "human rights" groups are tools of US imperialismhttps://t.co/sfw7drBhHq

In a tweet condemning the Iranian government’s harsh response to the protests, Amnesty rather ominously announced that “we urge states to bring Iran’s authorities to account.” It is difficult to see what states, except the United States, that Amnesty would be calling on to discipline Iran, especially seeing as the U.S. is already conducting a campaign of economic war against the country in the form of sanctions.

The United States government has long attempted to foment popular uprisings and hijack or manipulate protests against the Iranian government. As far back as 2009, the influential Brookings Institute think tank published a report with chapters dedicated to “supporting a popular uprising” and “inspiring an insurgency.” More recently, NBC News reported that a new study from Washington, D.C.-based think tank the Center for a New America Security arguing that the United States military should be indefinitely deployed in the region “to counter Iran,” raising the possibility of permanent war. Earlier this year MintPress News contributor Ali Taj worried that a U.S. conflict with the Islamic Republic is “virtually inevitable” and that any confrontation could be the spark that ignites a hot war.

President Rouhani announced that his government had emerged victorious from the situation, claiming that violence was a “scheme pre-planned by…the Zionists and the Americans.” To what extent, if any, the violence was indeed orchestrated from abroad is impossible to tell, but what is certain is the Trump administration will be disappointed that the government remains in power.