HOME / WORLD / Ukraine’s NATO fantasy is a suicide pill in disguise; military action by the alliance against pro-Russian forces would be crushed

Ukraine’s NATO fantasy is a suicide pill in disguise; military action by the alliance against pro-Russian forces would be crushed 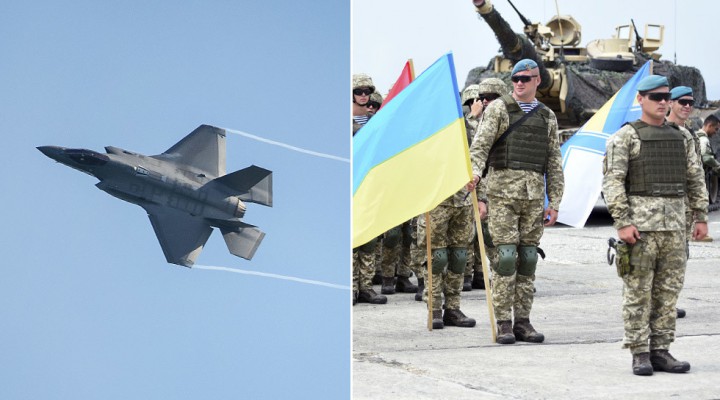 Ukraine’s President Zelensky hopes that NATO will assist Kiev in forcefully expelling Russia from Crimea and re-taking control of the breakaway Donbass. This dangerous fiction could lead to the destruction of his troubled country.

The following are the words and actions that the historians who may one day come to write how mankind blundered its way into a major conflict in 2021 will need to know, to understand its origins and the parts played by the shortcomings and strategic missteps of ill-suited leaders.

On March 24, 2021, Ukrainian President Volodymyr Zelensky signed into law Decree 117/2021, “On the Strategy of de-occupation and reintegration of the temporarily occupied territory of the Autonomous Republic of Crimea and the city of Sevastopol.” While the stated primary goal of this decree is the “restoration of the territorial integrity of Ukraine within its internationally recognized state border, ensuring the state sovereignty of Ukraine,” the reality is that the issue of restoring Ukrainian “territorial integrity” is merely a vehicle toward “gaining full membership of Ukraine in the European Union and the North Atlantic Treaty Organization.”

According to Zelensky, there is only one pathway for resolving the ongoing dispute between his nation and Russia over the status of the Crimea and the ongoing fighting in the pro-Russian eastern Ukrainian region of the Donbass. “NATO is the only way to end the war in Donbass,” Zelensky declared in a recent phone call with NATO Secretary General Jens Stoltenberg. Zelensky called for the immediate implementation of a ‘Membership Action Plan’ delineating Ukraine’s entry path into the NATO alliance. Such a move, Zelensky noted, “will be a real signal for Russia.”

Zelensky’s militant directive and blatant appeal for NATO membership did not go unnoticed by Russia. Nor did the deployment by the Ukrainian military of hundreds of armored vehicles and thousands of troops into the region, a fact that has been “under-reported” in the west.

A military exercise conducted some 30 miles from its border with Ukraine, involving 4,000 troops, was originally scheduled to end on March 23. A decision by Moscow to keep its forces in the field prompted the US military’s European Command to raise its watch level from possible crisis to potential imminent crisis – the highest level.

Defense Minister Sergey Shoigu had called the Russian exercises “routine control checks of the armed forces’ combat readiness.” This prompted the US Defense Department to call on Russia to “make their intentions more clear as to what they’re doing with this array of forces along the border.”

The tension between Russia and Ukraine has resulted in a series of conversations between Ukrainian officials and their counterparts in the West which have sought to portray the country as the victim of Russian threats of aggression, and to publicly underscore the West’s support for Ukraine. US Defense Secretary Lloyd Austin kicked this off, calling his Ukrainian counterpart on April 1 to express “unwavering U.S. support for Ukraine’s sovereignty” while condemning “Russian aggression” in the country.

This was followed the next day by one between Joe Biden and Zelensky, where the US president “affirmed the United States’ unwavering support for Ukraine’s sovereignty and territorial integrity in the face of Russia’s ongoing aggression in the Donbass and Crimea.”

Two days later, the European Union’s high representative for foreign affairs and security, Josep Borrell, called Ukrainian Foreign Minister Dmytro Kuleba to express “support of Ukraine’s sovereignty and territorial integrity.” That was followed by a call between UK Prime Minister Boris Johnson and Zelensky, in which Johnson “reaffirmed his unwavering support for Ukraine’s sovereignty and territorial integrity” while expressing “significant concerns” about Russian activity in Crimea and on the Ukrainian border.

The similarity of phrases was the trademark of the concerted diplomatic offensive. Words, however, have meaning, and no matter how one views “unwavering support” for Ukrainian “territorial integrity,” the harsh reality is that NATO’s capacity to provide support for any action intended to “recover” either Donbass, Crimea, or both, is limited. It knows that doing so would raise the likelihood of a military clash with Russia – and dare it risk that?

President Zelensky likes to promote the idea of a Ukraine-NATO alliance by advocating for an increase in military training between the two. Russia has sought to throw cold water on any such move, noting that it would be forced to respond if NATO troops were deployed to Ukraine, with Kremlin spokesperson Dmitry Peskov stating that Russia would be compelled to take “additional measures” to ensure its security, without specifying what such measures would entail.

The reality is that NATO is not in any position to intervene militarily on behalf of Ukraine, even if it were so inclined. Its ground combat capability has deteriorated significantly since the end of the Cold War in 1991.

The significant overall increase in spending has not translated into adequate ability to train and maintain forces on the ground, and multiple pro-NATO analysts have complained about European members of the alliance being unable to field enough troops quickly enough. Units that were once ready to take the field at a moment’s notice to respond to an attack by the Soviet Union and Warsaw Pact members have either been disbanded, mothballed, or locked away in garrisons, unable to effectively train

Almost all of NATO’s actually deployable combat power has been assembled in Poland and the Baltic Republics as part of a scheme to deploy four battalion-sized ‘battle groups’ designed to deter Russian military aggression in northern Europe. The ability on the part of NATO to generate in short order a similar combat-ready force capable of deploying into Ukraine is currently non-existent.

NATO does maintain what it calls a “Very High Readiness Joint Task Force” of around 6,400 troops. This force is built around a brigade-sized unit from one of NATO’s member states, rotating on an annual basis. Last year, Poland had responsibility. This year, the burden has fallen on 4,200 troops of Turkey’s 66th Mechanized Infantry Brigade, supported by smaller units from Albania, Hungary, Italy, Latvia, Montenegro, Poland, Romania, Slovakia, Spain, the UK, and the United States. Even under non-combat conditions, it would take days for this task force to assemble and deploy to Ukraine. In a time of war, it would be expected that the task force would be under constant attack from the moment it crossed into Ukraine, making the likelihood of a combat-capable force reaching the frontline highly unlikely, if not impossible.

NATO’s best option would be to deploy its air forces in support of Ukraine. But the viability of such an option is close to zero. NATO has not trained to fight against the kind of integrated air defense system that Russia has deployed around Ukraine. Its ability to project any meaningful air combat capability over Ukraine, let alone seize and maintain the kind of superiority necessary to support any forces engaged in combat operations, is virtually nil.

Perhaps NATO’s best bet comes in the form of the US Air Force’s newest 5th generation fighters – the F-22 and F-35. According to the US military, their pilots have been undergoing significant training in preparation for any conflict against the Russian military. For example, in a large-scale exercise known as ‘Red Flag’ last year, the F-35 and F-22 were able to achieve a 20:1 kill ratio against a notional Russian force flying SU-30-type aircraft.

But a similar exercise in Australia in 2008 involving a computer simulation of an attack by Russian SU-30 aircraft against F-35s and F-22s had the Russians coming out ahead. The F-35 in particular was described as “double inferior” to the SU-30, with experts noting that the advanced US fighter “can’t [out]turn, can’t [out]climb, can’t [out]run” its Russian opponent.

The F-35 has since then been uploaded with new software designed to fix identified problems. But as recently as 2017, the Air Force found more than 873 software flaws in the F-35 which impact its combat capability, perhaps most critical of which is its inability to effectively employ its main air-to-air weapon, the AIM-120 AMRAAM missile. This means that the F-35 will likely be compelled to fight the kind of close-in dogfights it is supposed to avoid. But even here it is at a disadvantage – its 25mm gun, which would be used in this situation, is plagued by poor accuracy.

Making matters even worse for the US Air Force is the fact that, since 2019, Russia has been gaining invaluable first-hand intelligence on the performance and operation of both the F-22 and F-35. The US operates both aircraft from bases in Qatar and the United Arab Emirates, where they have been involved in combat operations in Syria and Iraq. Russia has deployed its advanced S-400 air defense system in Syria, and its radars have become quite adept at detecting and tracking the supposedly ‘stealth’ aircraft. Moreover, Israel has flown its own F-35 aircraft over Syria and Lebanon, providing the Russians with more opportunities to prepare the S-400 for potential combat operations against the advanced fighters.

For the past two decades, the US has been largely flying combat operations in extremely permissive environments, operating unopposed over the skies of Afghanistan, Iraq, and Syria. Any combat mission over Ukraine against Russia would be very different, and have the US facing off against the world’s most sophisticated integrated air defense network, systems that have been fine-tuned to detect and destroy the best aircraft in the US inventory. The likelihood of the US Air Force being annihilated in the skies over Ukraine in the event of a force-on-force engagement with Russia is high, and the US military planners know this.

Zelensky can huff and puff all he wants about joining NATO and the leverage such membership would give him to “liberate” Crimea and Donbass. But “unwavering support” for Ukrainian “territorial integrity,” no matter how many times in unison it is uttered by the leaders of NATO, does not equate to a suicide pact, which is what any direct military conflict between NATO and Russia in Ukraine would be.

The danger is that this realpolitik is not being effectively transmitted to Zelensky, thereby creating the real risk of the kind of miscalculation that occurred in August 2008, when Georgian President Mikhail Saakashvili ordered his military into South Ossetia, believing he had the full support of the US. The result was a disaster for Georgia. A similar fate awaits Zelensky and Ukraine should a similar military misadventure be launched against pro-Russian forces in Donbass.

Estonian Intelligence Has Become A Mouthpiece For Anti-Russian Propaganda

2 thoughts on “Ukraine’s NATO fantasy is a suicide pill in disguise; military action by the alliance against pro-Russian forces would be crushed”