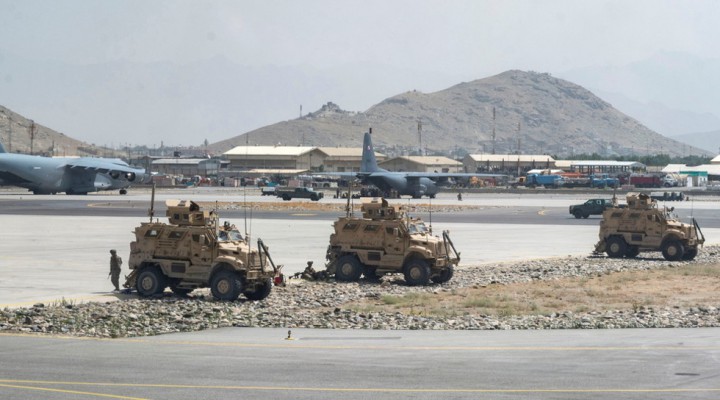 As thousands of US troops surged back into Afghanistan to secure Kabul International Airport for the evacuation of US and allied nationals, little thought seems to have been given to the fact that they are flying into a trap.

Hamid Karzai International Airport (HKIA) is one of the least defensible spaces in all of Afghanistan. It is surrounded by dense urban areas and commanding terrain features, which in the hands of anyone possessing ill intent and the means to manifest it means that the airport would cease to function as a place where lumbering transport and passenger aircraft could safely take off and land. Put simply, anyone armed with a heavy machine gun or rocket-propelled grenade could shoot down an aircraft operating out of HKIA at will. As luck would have it, Kabul is now filled to the brim with hostile people who are armed with heavy machine guns and rocket-propelled grenades.

Military aviators will tell you that there are ways to enter and exit facilities like HKIA that minimize exposure to threats such as those outlined above. For years these procedures, known as ‘corkscrewing’, were practiced regularly at Baghdad International Airport (I have personally experienced this procedure, aboard a C-130 aircraft landing and taking off from Arar airfield in northern Saudi Arabia during the Gulf War. It’s not for the faint of heart.) Given the loads that are being carried in and out of HKIA, however, radical flight maneuvers are not an option. Instead, the lumbering aircraft approach and depart while flying low and slow over terrain that friendly forces simply do not control.

Moreover, while on the ground, the aircraft are at the mercy of anyone possessing a mortar. Any combat veteran of Afghanistan can tell you that the Taliban not only possess a prodigious quantity of mortars of various calibers but are also extremely proficient in their use. There is nothing more vulnerable to the indirect fire from a mortar than parked aircraft – except perhaps the fuel storage areas from which the highly volatile aviation-grade fuel used to power these aircraft are kept.

The situation doesn’t get better for the thousands of military personnel who have been deployed into HKIA for the ostensible purpose of securing that facility to evacuate designated personnel. These troops are either located inside buildings that have not been hardened to protect against indirect attack (i.e., mortar fire), or are deployed outdoors in unimproved locations (i.e., not dug in) where any well-aimed mortar fire would cause havoc.

I am not privy to the force-protection planning that has gone into the projection of military force into HKIA. Imagery coming out of HKIA indicates that the US forces have a number of armed utility vehicles, and at least two AH-64 Apache helicopters, on-hand to assist in any self-defense operations that might be required. Media reports indicate that B-52 bombers, AC-130 gunships, and FA-18 fighters have been deployed into the region to support the evacuation. While this accumulation of airpower is noteworthy, it is limited by time-on-station issues (any aircraft orbiting near Kabul would be flying in from bases located many hundreds of miles away, and as such require refueling from aerial tankers; reports that C-17 transports are taking off nearly empty of fuel to maximize their load-carrying capacity suggest that aerial refueling capability does, in fact, exist in the skies over Afghanistan.)

Moreover, the tactical utility of employing combat aircraft in an environment like HKIA is limited by the knowledge that any such employment would result in horrific civilian casualties, which most democratically elected leaders would find politically intolerable. Of course, when confronted with the possibility of 6,000 US troops and tens of thousands of US citizens being slaughtered or captured, the issue of collateral damage becomes moot.

There is no way to spin this reality away. True, if necessary, the US commanders on the ground would be able to rapidly expand their area of control by simply assaulting out of the airfield and seizing the designated terrain. The second battle of Fallujah in Iraq was fought with a similar number of allied forces against an enemy similar in capability to the Taliban. Six thousand Marines and Paratroopers can seize a lot of territory. But starting a battle, and finishing it, are two different concepts. If the Taliban were able to close operations at HKIA, then the issue of resupply becomes a concern. While 6,000 battle-hardened US troops can inflict a lot of damage, they need food, water and ammunition to do so, all of which are in limited supply at HKIA. Now add in the requirement to care for tens of thousands of civilians, and one is looking at a logistical nightmare.

Simply put, no military commander in their right mind would have picked the current situation faced by US forces on the ground in HKIA as a desirable option when it came to carrying out the evacuation of civilians from Afghanistan. The fact that this is the plan is proof positive that a) there was no meaningful contingency planning for the large-scale evacuation of US and allied civilians from Afghanistan, and b) the speed of the Taliban victory caught everyone by surprise – so much so that the current HKIA death trap emerged as the most viable option available.

Anyone with a modicum of military planning experience could have sketched out alternatives that would not have hazarded US forces in such a manner. Simply holding onto the large, fortified air bases at Bagram and Kandahar, while securing the approaches to Kabul, would have allowed civilians authorized for evacuation to have been gathered in an orderly fashion, processed securely and evacuated in a timely manner. Instead, the Biden administration has created the potential for a modern-day Dien Bin Phu, the infamous battle during the French war in Indochina that saw thousands of French troops surrounded by hostile Viet Minh forces and eventually compelled to surrender in humiliating fashion.

The likelihood of such an outcome at HKIA is remote, if for no other reason that the Taliban does not want to give either the US or its allies any excuse for continuing their military presence in Afghanistan. The Taliban is looking forward to a future free from foreign occupation and interference in the affairs of Afghanistan. The fact that the Biden administration has placed the fate of tens of thousands of US citizens, military and civilian alike in the hands of the Taliban is, however, an unacceptable situation. There is not much that US military planners can do now without unduly hazarding the security of forces already on the ground.

However, the fact that it has come to this is a politically disqualifying event, one that demands the resignation of those civilian and military officials who advised the president, and a Congressional inquiry into the performance of Joe Biden himself. Donald Trump was impeached based on a single phone call that was conflated into a threat to the national security of the US. The question is, now that Congress is presented with an actual threat to the national security of America, what will it do?