HOME / WORLD / Why the Lie Machine is Grinding Afghanistan into Dust 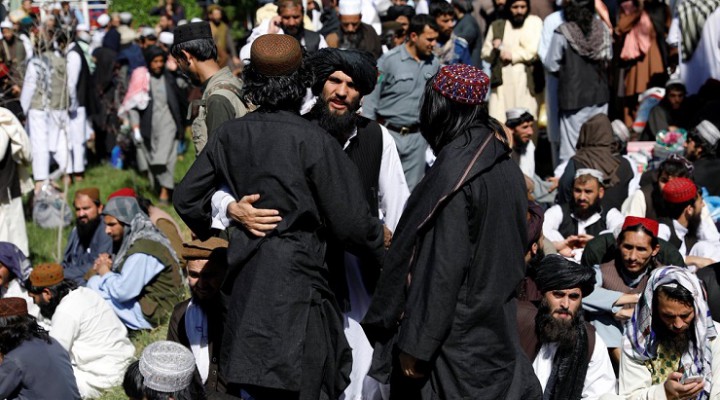 Since 2010, the Pentagon has covertly mapped mineral deposits in Afghanistan worth more than three trillion US dollars. Those resources were, until short hours ago, largely inaccessible.

That is no longer the case. The Taliban (banned in Russia) had, over the past decade, written letter after letter to American diplomats and congressional leaders, offering to end the war but hand these key resources over to American companies.

This was the deal the US was offered, almost “too good to be true,” one that is supposedly “on the table” now that the civil war is over.

However, that deal is dematerializing minute by minute and what is killing it is this, a massive propaganda effort not unlike the fake stories of incubator kidnappings and murders in Kuwait after the “misunderstanding with Iraq.”

The Taliban is now, according to the US media, sending terror bombers around the world, burning women alive and filling secret underground prison with thousands.

There is no evidence, not an iota, of any of this. Kabul is quiet. There is no gunfire. There are no arrests being made. If what has happened around Afghanistan with the collapse of the Ghani regime continues, the Taliban may well be showing a new leaf, with the excesses of the past being relegated to the past. We watch.

Peace in Afghanistan could be at hand if we are to believe the Taliban. They tell us they have issue an amnesty for all former backers of the fallen government.

Women are keeping their rights, jobs and even graduate educations and, thus far, the 6000 US troops that landed at the Karzai Airport are being ignored by the Taliban.

The Taliban says the Americans are legitimate guests, this time at least, who are expected to leave and take with them who and what? Mercenaries? Drug lab chemists?

There is another story as well, a press war has begun against the Taliban, one of nefarious purpose and of devastating brutality. This is the Lie Machine going into gear, poisoning the future of Afghanistan if it can and there is very little that the Lie Machine can’t do.

It has only been hours, short days that President Ghani fled the nation with little more than the clothes on his back and, allegedly, 4 cars, a helicopter and over a billion dollars in American cash.

Within minutes a new war began though no fighting is now going on in Afghanistan and, quite frankly, little evidence that any fighting has gone on there for weeks.

You see, the fall of the West’s puppet government in Afghanistan isn’t a bit like the Fall of Saigon, an analogy we are recently drowning in.

The only war that was going on before this, and for years as well, was one of paid mercenaries doing just enough to keep their American handlers happy.

Enough dry-cleaning chemicals were trucked into Afghanistan from Karachi to do the Saudi Royal family’s robes for a thousand years.

For years now, Afghanistan has been a playground for sexual deviants among the NGOs and mercenary contractors, among the military elites of the West, and let us not forget the endless train of legislators and minor “diplomats” whose “dancing boy” vacations kept them lingering around Kabul.

This is the truth of it but only a small dose of truth. Real “truth” is out there as well, a truth not told, a story not allowed, a story of money and power and crime.

Afghanistan will need money. The abandoned helicopters and tanks the US had given the Ghani regime are worthless without a war. The 300,000-man army paid for by Washington, one of the world’s largest and “best trained” had no intention of fighting a civil war.

Twenty years is a long time to fight and fighting a war for an unpopular and utterly corrupt US backed regime was always a losing proposition.

But to build that industry, investment capitol is needed and foreign partners. Three major nations can do this, the United States, China and Russia.

One must also note that playing “the big three” against one another has always been the plan of the Taliban once they assumed power and that “assumption of power” has always been a guarantee.

To do this, get the best deal and the kind of deal that will respect Afghanistan’s sovereignty, nations must be free to invest and build.

What will stop them is this:

The United States, if subjected to enough horrific propaganda, and that has already begun, will be forced to “sanction” Afghanistan and any nation that tries to work there.

Current projects with India and China would end, thousands of jobs would disappear but, moreover, development would end. This what the US did to Syria with their Caesar Act.

The justification for crushing the Syrian people was carefully orchestrated propaganda coordinated with false flag terrorism.

This is what is now being done in Afghanistan but the force and direction behind this effort is more difficult to ascertain. This doesn’t seem to be a struggle for political power but rather a “spat” between international banking cartels fighting over the rotting corpses of the Afghani people.

Part of the reason for the US staying in Afghanistan was natural resources. There is no semi-conductor industry without rare earth elements. Fluctuations in those markets, in those highly secretive markets, reductions in supply for instance, can impact nation economies quickly.

Why can’t the US build cars anymore? Experts say semiconductors are not being produced, could a shortage of rare earth elements be the root cause?

Well, if Afghanistan “comes online,” meaning any victor, even the Taliban in the civil war, those who control the rare earth elements, who control semi-conductor manufacturing and almost everything else as well, lose power.

Therefore, for the United States, its own mining companies have been waiting to get into Afghanistan for decades.

In 1992, the Nathan Berger Studies Project on Afghanistan published a report on mineral resources in Afghanistan. This report outlined what would be needed to restore Afghanistan’s infrastructure after years of internal strife and what resources could be expected to be brought online afterwards.

The list of minerals is staggering, not just coal and iron ore but rare earths, emeralds, copper, chromite and considerable oil and gas as well.

Then there are the rare earth elements. From NBC News, 2014:

Afghanistan, a country nearly the size of Texas, is loaded with minerals deposited by the violent collision of the Indian subcontinent with Asia. The US Geological Survey began inspecting what mineral resources Afghanistan had after US-led forces drove the Taliban from power in the country in 2004.

In 2006, US researchers flew airborne missions to conduct magnetic, gravity and hyperspectral surveys over Afghanistan.

In 2010, the USGS data attracted the attention of the US Department of Defense’s Task Force for Business and Stability Operations, which is entrusted with rebuilding Afghanistan. The task force valued Afghanistan’s mineral resources at $908 billion, while the Afghan government’s estimate is $3 trillion.

Over the past four years, USGS and TFBSO have embarked on dozens of excursions to confirm the aerial findings, resulting in what are essentially treasure maps for mining companies.

Can CNN or Fox News turn the collapse of the miserable Ghani regime in Kabul into a new “holocaust” built of lies and fog?

This is exactly what they are doing, hired guns but for what client?

We could go further, delving into layered conspiracies, and question as to how much of what has happened with the end of the civil war in Afghanistan may well have been planned and not by the Taliban.

Is the game one of manipulating the semi-conductor industry, which if you haven’t noticed is the controlling factor of our times?

Could it be simpler, manipulating world commodity markets while playing Afghanistan the same way events in the Straits of Hormuz are handled, manipulated tied to trades in oil futures.

What can we assume? Crime for profit is the game and if it means millions suffer or even millions die, so be it.