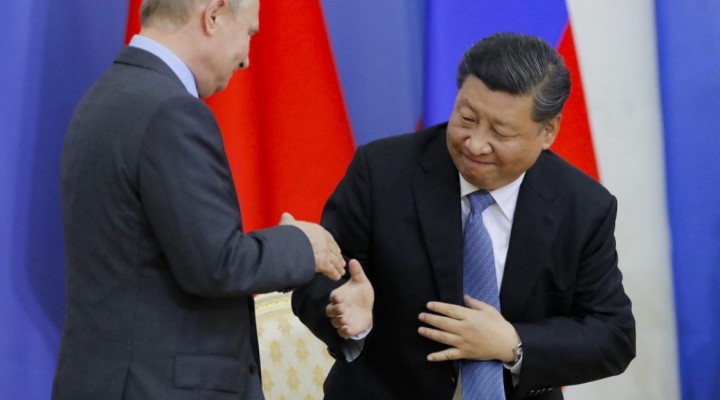 The Russian role will be to balance the hegemonic powers, as a guarantor of a new union of non-aligned nations

Professor Sergey Karaganov is informally known in influential foreign policy circles as the “Russian Kissinger” – with the extra bonus of not having to carry a “war criminal” tag from Vietnam and Cambodia to Chile and beyond.

Karaganov is the dean of the Faculty of World Economy and International Affairs at the National Research University Higher School of Economics. He’s also the honorary chairman of Russia’s Presidium of the Council on Foreign and Defense Policy.

In December 2018, I had the pleasure of being received at Karaganov’s office in Moscow for a one-on-one conversation essentially about Greater Eurasia – the Russian path for Eurasia integration.

Now Karaganov has expanded his main insights for an Atlanticist made in Italy vehicle usually more distinguished for its maps than its predictable “analyses” straight from a NATO press release.

Even noting, correctly, that the EU is a “profoundly inefficient institution” on a slow path towards dissolution – and that’s a massive understatement – Karaganov observes that Russia-EU relations are on their way to a relative normalization.

This is something that has been actively discussed in Brussels corridors for months now. Not exactly the agenda envisaged by the US Deep State – or the Trump administration, for that matter. The degree of exasperation with Team Trump’s antics is unprecedented.

Even as Russia’s trade with Asia is now equivalent to trade with the EU, a new “threat” emerged in Europe: China.

An Inter-Parliamentary Alliance on China was just invented last week as a new demonization platform, congregating representatives from Japan, Canada, Australia, Germany, the UK, Norway and Sweden as well as members of the European Parliament.

China “as led by the Chinese Communist Party,” is to be faced as a “threat” to “Western values” – the same old triad of democracy, human rights and neoliberalism. The paranoia embodied in the dual Russia-China “threat” is nothing but a graphic illustration of the prime Grand Chessboard clash: NATO vs Eurasia integration.

Karaganov breaks down the crucial Russia-China strategic partnership to an easily absorbed formula: As much as Beijing finds strong support on Russia’s strategic power as a counterpunch to the US, Moscow can count on China’s economic might.

He recalls the crucial fact that when Western pressure on Russia was at its peak after Maidan and the Crimea referendum, “Beijing offered Moscow virtually unlimited credit, but Russia decided to brave the situation on its own.”

One of the subsequent benefits is that Russia-China abandoned their competition in Central Asia – something I saw for myself in my travels late last year.

That does not mean competition has been erased. Conversations with other Russian analysts reveal that fear of excessive Chinese power is still on, especially when it comes to China’s relations with weaker and non-sovereign states. But the bottom line, for such a sterling realpolitik practitioner as Karaganov, is that the “pivot to the East” and the strategic entente with China favored Russia in the Grand Chessboard.

Karaganov totally understands the Russian DNA as a great Asian power – taking into consideration everything from authoritarian politics to the natural resource wealth of Siberia.

Russia, he says, is “close to China in terms of common history despite the enormous cultural distance separating them. Up to the 15th century, both were under Genghis Khan’s empire, the largest in history. If China assimilated the Mongols, Russia ended up expelling them, but in two and a half centuries of submission it incorporated many Asian traits.”

Karaganov considers Kissinger and Brzezinski “lucid strategists,” and laments that even if they suggested otherwise “the American political class” inaugurated a “new Cold War” against China. He breaks down Washington’s objective as playing a “Last Battle” profiting from the forward bases the US still dominates in what Wallerstein would define as our collapsing world-system.

Karaganov is very sharp on Russia’s independent streak – always fiercely countering “whoever pointed at a global or regional hegemony: from the descendants of Genghis Khan to Charles XII of Sweden, from Napoleon to Hitler. In the military and political spheres, Russia is self-sufficient. Not in the economic, technological and cyber spheres, where it needs markets and external partners, which it will search and find.”

The result is that the Russia-EU rapprochement dream remains very much alive, but under “Eurasian optics.”

That’s where the concept of Greater Eurasia comes in, as I discussed with Karaganov in our meeting: “a multilateral, integrated partnership, officially supported by Beijing, based on an egalitarian system of economic, political and cultural links between diverse states,” with China playing the role of primus inter pares. And that includes a “significative part of the Western extremity of the Eurasian continent, that is, Europe.”

That’s what the evolution in the Grand Chessboard seems to point at. Karaganov – correctly – identifies western and northern Europe as attracted to the “American pole,” while southern and eastern Europe are “inclined towards the Eurasian project.”

The Russian role, under this framework, will be to “balance the two possible hegemonic powers,” as a “guarantor of a new union of non-aligned nations.” That hints at a very interesting new configuration of the Non-Aligned Movement.

So meet Russia as one of the supporters of a new multilateral, multi-vector partnership, finally moving from a status of “periphery of Europe or Asia” to “one of the fundamental centers of northern Eurasia.” A work in – steady – progress.