HOME / Economy / Is Putin Laying A Petroleum Trap For Trump? 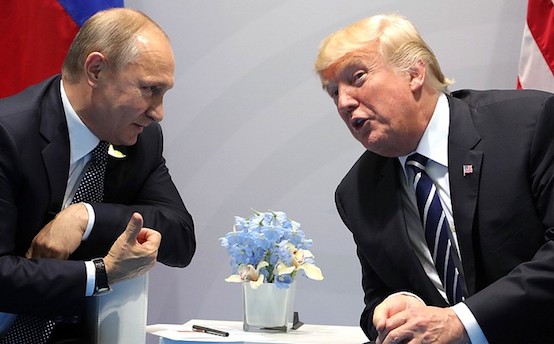 The president is heralding a deal that commits Russia to cuts in oil production, but a closer look reveals a more complicated path.

The G20 met in virtual session on April 10, ostensibly to address the crippling one-two punch brought on by the economic impact of coronavirus and the simultaneous collapse of the price of oil resulting from Russia and Saudi Arabia flooding an already depressed market.

In the end, the world’s leading oil producers finalized an agreement on sweeping oil production cuts, building on a previous agreement between Russia and Saudi Arabia to stop their price war. The United States is taking credit for this breakthrough, however, citing the role it played in helping bring Mexico to closure.

But the U.S. contribution was, and is, illusory—President Trump is in no position to promise cuts in U.S. oil production, and as such remains unable to meaningfully contribute to the global oil production reduction scheme. Void of any substantive final agreement, global energy markets will continue to suffer as production far outstrips demand. For U.S. oil producers, who have already seen a 2.5-3 million barrel per day decrease in production, the results will be catastrophic, driving many into bankruptcy and helping push the U.S. economy into a tailspin that will lead to a depression potentially worse than that of the 1930’s.

Trump’s only recourse may be to turn to Russia for help in offsetting needed U.S. oil production quotas, which appears to have been the Russian plan all along.

On Monday March 30, President Trump spoke on the phone with Russian President Vladimir Putin. The suppressed price of oil, and Russia’s role in facilitating that vis-à-vis its refusal to cut its oil production, thereby triggering a price war with Saudi Arabia, was the dominant topic. A Kremlin read-out of the call noted that “opinions on the current state of global oil markets were exchanged. It was agreed there would be Russo-American consultations about this through the ministers of energy.”

During the call, Trump mentioned America’s need for life-saving medical supplies, including ventilators and personal protective equipment. Putin asked if Russia could be of assistance, and Trump said yes.

The decision to allow Russian aid (purchased by the U.S.) into the country, however, directly contradicted guidance that had been issued by the U.S. State Department a full week before Trump’s phone call with Putin. On March 22, the State Department sent out an internal email to all U.S. Embassies with guidance on how to proceed with seeking out critical support. “Depending on critical needs, the United States could seek to purchase many of these items in the hundreds of millions with purchases of higher end equipment such as ventilators in the hundreds of thousands,” the email stated. The email noted that the request applies to all countries “minus Moscow,” indicating the United States would not ask Russia for support.

While the two leaders, according to the White House, “agreed to work closely together through the G20 to drive the international campaign to defeat the virus and reinvigorate the global economy,” the March 30 phone call apparently did not directly touch upon U.S. sanctions on Russia. In fact, Trump told  Fox News prior to the leaders’ exchangethat he fully expected Putin to bring it up. He did not say how he might respond if Putin did.

Trump’s confidence in a Putin sanction request most likely stemmed from a statement made by the Russian President to a virtual meeting of G20 leaders on March 22, where he noted that “ideally we should introduce a…joint moratorium on restrictions on essential goods as well as on financial transactions for their purchase.” Putin’s comments were more pointed toward the lifting of sanctions for humanitarian purposes on nations like Iran and Venezuela, but his conclusion hinted at a larger purpose: “These matters should be freed of any politics.”

Russia has been operating under U.S. and European sanctions following its annexation of Crimea in 2014 and its role in the Ukraine crisis. But the sanctions that have angered Russia the most—and which have contributed to Russia’s price war with Saudi Arabia targeting U.S. oil producers—were those levied against NordStream 2, the Russian pipeline intended to supply Germany, and Europe, with natural gas. Trump signed a bill authorizing these sanctions in December 2019. Russia immediately condemned this action.

Instead of asking Trump outright to lift sanctions, Putin got Trump to help underscore Russia’s position that sanctions were an unnecessary impediment to relations between the U.S. and Russia during the coronavirus pandemic. In agreeing to allow the Russian AN-124 aircraft to deliver medical supplies to the U.S., Trump unwittingly played into a carefully laid bit of Russian propaganda.

Among the aid Russia delivered were boxes of Aventa-M ventilators, produced by the Ural Instrument Engineering Plant (UPZ). UPZ is a subsidiary of Concern Radio-Electronic Technologies (KRET) which, along with its parent holding company ROSTEC, has been under U.S. sanctions since 2014. According to the State Department, which payed for 50 percent of the equipment on the flight, the sanctions do not apply to the purchase of medical equipment. But by purchasing critical medical equipment from sanctioned companies, the State Department simultaneously violated its own guidance against buying Russian equipment while underscoring Putin’s point—sanctions should be waived for humanitarian purposes.

But Putin’s trap had one more twist. According to the Russians, half of the aid shipment was paid for by the U.S. State Department, and the other half by the Russian Direct Investment Fund (RDIF), a Russian sovereign wealth fund which, like ROSTEC, was placed on the U.S. lending blacklist in 2014 following Russia’s intervention in Crimea. The arrival of an airplane full of critical medical equipment ostensibly paid in part by a sanctioned Russian sovereign wealth fund provided a window of opportunity for Kirill Dmitriev, the CEO of RDIF, to gain access to the U.S. mainstream media to push the Russian line.

On April 5, Dmitriev published an OpEd on the CNBC web page titled “The US and Russia should work together to defeat the coronavirus.” Dmitriev likened the current global struggle against the coronavirus pandemic to the fight against Nazi Germany. “During World War II, American and Russian soldiers fought side by side against a common enemy,” he wrote. “We achieved victory together. Just as our grandfathers stood shoulder to shoulder to defend our values and secure peace for future generations, now our countries must show unity and leadership to win the war against the coronavirus.”

But Dmitriev’s true target was oil, and by extension, sanctions. “In times like this,” he noted, “new approaches to explore close collaboration between the U.S., Russia and other countries are needed to stabilize energy and other markets, to coordinate policy responses and to revitalize economic activity. For example, Russia proposed to jointly undertake significant oil output cuts with the U.S., Saudi Arabia and other countries to stabilize markets and secure employment in the oil industry.”

Getting the U.S. to lift sanctions was a big ask, something Dmitriev acknowledged. “To change the views on Russia in an election year may be an insurmountable challenge. But so it also seemed in 1941, when the U.S. and the Soviet Union put behind the differences of the past to fight the common enemy.”

While the “common enemy” referred to by Dmitriev was clearly the coronavirus pandemic, he could also have been speaking about Senator Ted Cruz, and others of his ilk, who led the charge to sanction NordStream 2. The current oil crisis has hit Texas particularly hard. In an indication of things to come, Whiting Petroleum, a major player in the shale oil industry,filed for Chapter 11 bankruptcy protection. Whiting specialized in North Dakota fracking, which required oil prices of $60 per barrel to be economically viable. The current price of sub-$25 doomed the company. Texas fracking is slightly cheaper, with a profitability margin of around $49. With oil prices depressed, Texas companies are feeling the pinch, and are on the verge of collapse.

Trump agreed to participate in the G20 meeting because of the promise of a Russian-Saudi production cut; on this, Putin delivered. But the Russians made any final agreement contingent upon Trump agreeing to significant reduction in U.S. oil production. This was never a possibility—whereas both Russia and Saudi Arabia have national oil companies whose operations are a matter of national policy, the U.S. oil industry is privately owned in its entirety, and dependent on supply and demand equations derived from a free market to determine profitability.

While the G20 meeting resulted in collective cuts of close to 10 million barrels a day, the drop in demand for oil brought on by the coronavirus pandemic has created a glut in which the world produces some 27.4 million barrels per day in excess of global needs. The bottom line is the G20 cuts won’t solve the problem of too much oil, and without additional cuts, the bottom will continue to fall out of the oil market, dooming U.S. producers.

Trump cannot turn on or off the U.S. oil-producing spigot, a fact Russia knows only too well. When Trump attempted to gain credit for a 2.5-million-barrel reduction in production brought on by bankruptcy, Russia refused to allow it. Likewise, when Trump promised cuts in oil production to help Mexico meet G20 targets, it was a promise the American president is unable to deliver on. In getting the U.S. to agree to attend a G20 summit on oil production, the Russians lured the U.S. into a policy trap from which there is no escape.

Void of any final agreement, the U.S. oil industry will inevitably collapse. Trump claims that the G20 virtual summit came up with cuts totaling up to 20 million barrels per day, without explaining how he came up with this number. This number is fictional; the U.S. production crisis is not. Trump’s only hope is for a further softening of the Russian position on production. But this will not come without a price, and that price will be the lifting of energy-sector sanctions targeting Russia.

Is Putin Laying a Petroleum Trap for Trump?

0 thoughts on “Is Putin Laying A Petroleum Trap For Trump?”