HOME / Economy / Energy insecurity: Trump is a hostage to internal politics and an illusory ‘free market’ in the oil price game 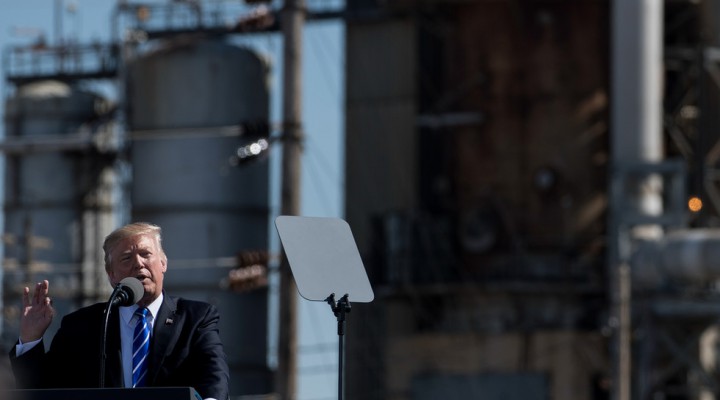 Having bragged repeatedly of America’s energy independence, President Trump must confront the harsh realities of a global oil market no longer able to sustain inefficient US oil producers as he prepares to negotiate with the G20.

The global economy struggles to adapt to the one-two punch of reduced oil demand brought on by the coronavirus pandemic and the Russian-Saudi Arabian price war, which has seen the oil markets flooded with cheap oil, threatening to drive the price per barrel to historical lows. The G20 will meet today in virtual session (hello, global social distancing) to try and work out a deal for universal production cuts to stabilize oil prices and, in doing so, facilitate global economic recovery. While both Russia and Saudi Arabia have tentatively agreed to massive cuts in their production, such a deal is contingent upon the US making similar cuts. Domestic political realities, however, may tie President Trump’s hands, killing the deal before it even gets started.

The US has been riding the shale oil wave for more than a decade, taking advantage of new fracking technologies to exploit its vast shale oil reserves, and in the process propelling itself past Saudi Arabia and Russia to take the number one spot as the world’s largest producer of oil. This has been a point of political pride for President Trump, who has used the notion of US energy independence as one of the key indicators of a booming economy.

Any oil-derived indicator of US economic health, however, is largely illusory. Unlike Russia and Saudi Arabia, both of which have massive state-run oil companies whose operations can be dictated by the central government, the US oil industry is comprised exclusively of private corporations whose economic health is ostensibly driven by free market principles. But this ‘free market’ is itself fiction: the US fracking industry, which anchors US oil production growth, has benefited extensively from years of favorable legislation, tax breaks, and a supportive US foreign policy which has used sanctions to restrict oil production in Iran and Venezuela to free up global market share which has been seized by US producers.

The reality is that the US fracking industry is incapable of surviving in a true free market. To survive financially, most US fracking operations require oil prices in the range of $40-60 dollars per barrel. In 2014, when Saudi Arabia tried to challenge US oil producers by flooding the market with cheap oil to drive US producers out of business, the US companies were only able to stay afloat with the benefit of massive intervention by financial institutions, which provided injections of liquidity that kept the frackers afloat until Saudi Arabia backed off.

This intervention, while saving inefficient oil producers in 2014, has emerged as the Achilles’ heel of the US oil industry today – US oil producers have too much debt, and too little resilience, to ride out the current global market collapse. Free market principles are coming back to bite US oil producers, forcing many to declare bankruptcy, with many more soon to follow.

President Trump has intervened to the extent he can in an effort to stabilize oil prices and save the US fracking industry, authorizing the government to purchase billions of dollars of oil for the US strategic reserve while pressuring foreign producers to make the necessary cuts in production needed to stabilize the market and allow the price of oil to settle at levels capable of sustaining US oil. The harsh reality, however, is that so long as Russia and Saudi Arabia are engaged in a price war that floods the market with oil, the price of oil will continue to fall, and with it the viability of the US fracking industry.

Trump, facing a contentious election for a second term, is desperate for a deal that will position the US for the possibility of a post-pandemic economic boom, thereby boosting his re-election prospects. He has been successful in pressuring Saudi Arabia to come to the negotiating table (while the cost to produce a barrel of Saudi oil is around $9, Saudi budgets require oil prices in the $60-80 dollar range to remain in the black), the same cannot be said about Russia, which can survive on $25 oil for up to a decade.

In this current crisis, Russia holds all the cards. Russia’s objectives in entering this price war with Saudi Arabia were very specific – to make US shale oil producers share the pain of shrinking oil demand by engaging in reciprocal cuts in production, and to leverage this pain into some sort of sanctions relief down the road. Russia’s tentative agreement to participate in deep mutual production cuts was but a tease, injecting a sliver of hope into a market which reacted to the prospect, as opposed to reality, of a market adjustment.

Russia has made it clear that there will be no deal unless the US absorbs its fair share of the production cuts. Trump has tried to use the nearly 2 million barrel a day reduction in oil production brought on by US fracking companies going out of business as representing the US share, but Russia has refused to accept this, citing the difference between market reality and planned production cuts. Trump, however, has no direct means available to compel production cuts on his side. Moreover, any indirect pressure, such as regulatory tightening or a halt in the federal purchase of oil, would be political suicide in an election year.

Russia has the US between a rock and a hard place. The only question that remains is how much pain does Russia intend to inflict, and at what cost? It is unrealistic to expect Trump to exert influence on a fragile US oil market. But by sustaining the pressure generated by free market realities, Russia may be able to leverage any relief it can provide for long-term US sanctions relief. This is the real game being played, and should be kept in mind as the G20 gathers to discuss the future of global oil markets.

0 thoughts on “Energy insecurity: Trump is a hostage to internal politics and an illusory ‘free market’ in the oil price game”