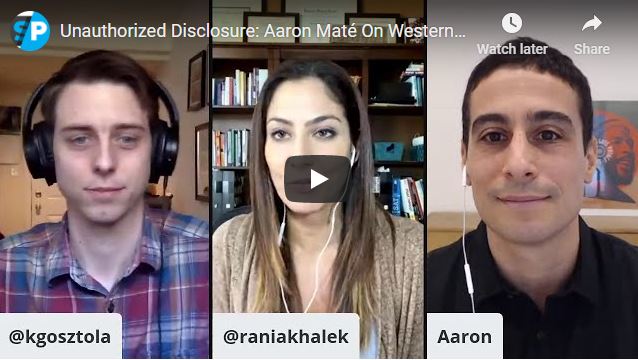 OPCW whistleblower Ian Henderson and former OPCW director José Bustani, who testified before the UN Security Council, were attacked by the United States, United Kingdom, France, and Germany during two UN Security Council meetings in which they provided testimony.

Bustani was blocked from reading his prepared statement on the OPCW’s cover-up of what they uncovered when investigators examined the scene of an alleged chemical attack in Douma, Syria, in April 2018.

Henderson was accused of being part of a “disinformation exercise,” even though he was personally involved as an investigator, and physicist Ted Postol and journalist Aaron Maté, host of “Pushback” and a contributor to The Grayzone, faced smears as well as they shared testimony.

For this week’s episode, Rania Khalek and Kevin Gosztola talk with Aaron about what he experienced and his reaction to the attacks on Henderson and Bustani.

Aaron calls out U.S. media, in particular progressive media, that have totally ignored the OPCW scandal exposed by whistleblowers and WikiLeaks.

Later in the show, Kevin asks Rania and Aaron for their thoughts on the crisis at the U.S. Agency for Global Media, which oversees Voice of America and other state media projects.

Employees there allege the Trump administration has politicized the organization and turned it into a propaganda outlet (even though that is what it always does—produce propaganda for the U.S. government).