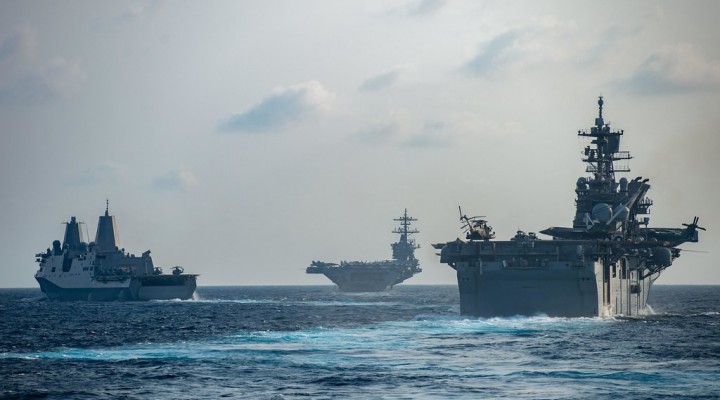 Taiwan has been in the news a lot lately, and it’s really bringing out the crazy in people.

The mass media have been falsely reporting that China has been encroaching on Taiwan’s “air defense zone”, which gets stretched into the even more ludicrous claim that China “sent warplanes flying over Taiwan”. In reality Chinese planes simply entered an arbitrarily designated area hundreds of miles from Taiwan’s coast it calls its “Air Defence Identification Zone”, which has no legally recognized existence and contains a significant portion of China’s mainland. This is likely a response to the way the US and its allies have been constantly sailing war ships into disputed waters to threaten Beijing.

As Moon of Alabama reports, US warmongers inflamed this non-controversy even further by feeding a story to the press about the already public information that there are American troops in Taiwan training the military there, citing “concern” about the danger posed by China.

This past weekend, warships from six countries entered the South China Sea. Nearly all came from the other side of the world.

Guess which event is trending?

Now headlines are blaring about President Tsai Ing-wen responding to this non-event with the announcement that Taiwan will “do whatever it takes to defend its freedom and democratic way of life.” Former Australian Prime Minister Tony Abbott just visited Taipei to advocate that “democracies stand shoulder to shoulder” with Taiwan against China. The CIA has announced the creation of a new spy center that will focus solely on China, which CIA Director William Burns says will “further strengthen our collective work on the most important geopolitical threat we face in the 21st century: an increasingly adversarial Chinese government”.

A recent poll says that now more than half of Americans would support sending US troops to defend Taiwan from an invasion by the mainland, plainly the result of the aggressive propaganda campaign that has greatly escalated public hysteria about China. In Australia the mass media are cranking out unbelievably insane 60 Minutes episodes ridiculously pushing the idea that China may attack Australia and that Australians should be willing to go to war to protect Taiwan. I’ve been having many disturbing interactions with people online who emphatically support the idea of the US and its allies going to war with China over Taiwanese independence.

This is clearly nuts, and anyone who buys into this line of thinking is a brainwashed fool.

This isn’t some kind of complicated anti-imperialist issue, and it has nothing to do with which side you take in the debate over what government Taiwan belongs under. The US and its allies engaging in a full-scale war with nuclear-armed China over Taiwan is a prospect that should be vehemently opposed out of simple, garden variety self-preservation.

Obviously if Beijing decides to launch a military assault on Taiwan in its bid to reunify China that would be a terrible thing which would cause a lot of suffering. I don’t think that will happen unless western powers push Taipei into declaring independence or otherwise upset the delicate diplomacy dance in some major way, but if it does happen under any circumstances that would be awful.

But Taiwanese independence is not worth fighting a world war that could kill millions, and potentially billions if things go nuclear. This should be extremely obvious to everyone.

War with China: Are we closer than we think?

I'm three minutes into this #60MinutesAustralia episode and they've already had on a senior analyst from the state-funded and military industrial complex-funded @ASPI_org.https://t.co/ZYPOk9uSNX

War proponents will reference Hitler, as they literally always do whenever there’s talk of war against someone the United States doesn’t like, arguing that China taking Taiwan would be like the Nazis invading Poland after which they’ll just keep invading and conquering until they are stopped. But there’s no evidence that China has any interest in invading Japan, much less Australia, still less everyone else, or that it has any ambitions on the world stage beyond reunification and securing its own economic and security interests.

The idea that China wants to take over a bunch of foreign lands, make you live under communism and give you a social credit score is the same kind of foam-brained bigoted othering which told previous generations that Black men want to take over your neighborhood so they can have sex with your wives. It’s the sort of belief that can only find purchase in an emotionally primitive mind that lacks the ability to put yourself in someone else’s shoes and understand that not everyone wants what you have.

The jarring amount of pushback I’ve been getting for my very sane and moderate position that we should not be willing to start World War Three between nuclear powers over Taiwanese independence makes it abundantly clear that many people don’t truly understand that starting a war means you have to actually send actual human beings to go fight that war. All the big brave warrior men bloviating about the need to stand up to China know they’ll never find themselves on the front line of that conflict because they’re too old, but they’ll happily send my kids and the kids of countless of other mothers to go and fight in it. It’s like a video game or a movie to them.

Propaganda has made us so compartmentalized and detached from the realities of the horrors of war. If people could really see what war is and what it does, truly grok deep down in their guts how their own governments are inflicting those horrors on people right now, they’d fall to their knees in anguish and never again advocate for such things. No sane person would support a war of this scale if they truly understood what it would mean.