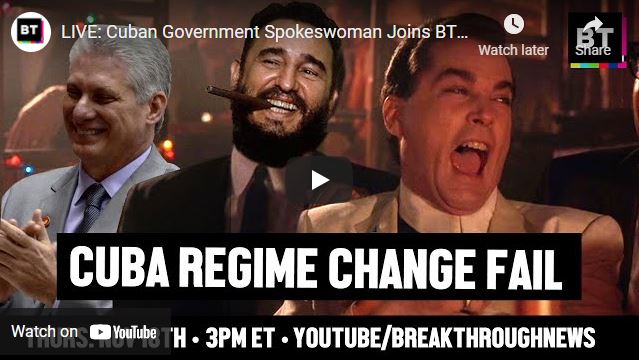 The Biden administration, CIA, and associated cut-outs and think tanks were promoting what were supposed to be massive protests in Cuba this week, but turned out to be nearly non-existent. Deputy Director of US Affairs at the Cuban Foreign Ministry Johana Tablada de la Torre explains what happened to the CIA-fomented plans for protest and why the Cuban people are continuing to reject U.S. imperialism, meddling, and aggression.

Also, the nation is watching the trial of Ahmaud Arbery’s killers with bated breath. Evidence is piling up against shooter Travis McMichael, his father Gregory McMichael (who yelled “Stop, or I’ll blow your f*****g head off!”) and William “Roddie” Bryan Jr., who captured the killing on his phone while chasing Arbery. Georgia journalist and activist Anoa Changa, host of the podcast The Way with Anoa, goes over the facts, the court arguments, and the eye-popping level of racism in the courtroom.

Also on the show:

Hertencia Petersen, aunt of Akai Gurley, who was murdered by NYPD officers in November 2014. She will be joined by Kerbie Joseph, longtime police brutality community organizer with ANSWER Coalition and SOS Coordinator with Audre Lorde Project, on the fight for justice for Akai Gurley and the upcoming street naming for Akai.

KJ Noh, peace activist, scholar on the geopolitics of Asia & organizer with Pivot to Peace, on the New Cold War against China and the meeting between President Biden and Chinese President Xi Jinping.

Kameron Hurt, organizer with the Coalition to Free Ruchell Magee & member of the Party for Socialism and Liberation, on the struggle to free political prisoner Ruchell Magee, still in prison at the age of 82.

In the latest development of the Russiagate implosion, Aaron Maté, journalist at The Grayzone & host of the show ‘Pushback with Aaron Maté’ details the indictment of Igor Danchenko. Danchenko has been charged with deliberately feeding false information to Christopher Steele, the author of the infamous and now widely discredited ‘Steele Dossier,’ which alleged Kremlin involvement in the 2016 election of Donald Trump.