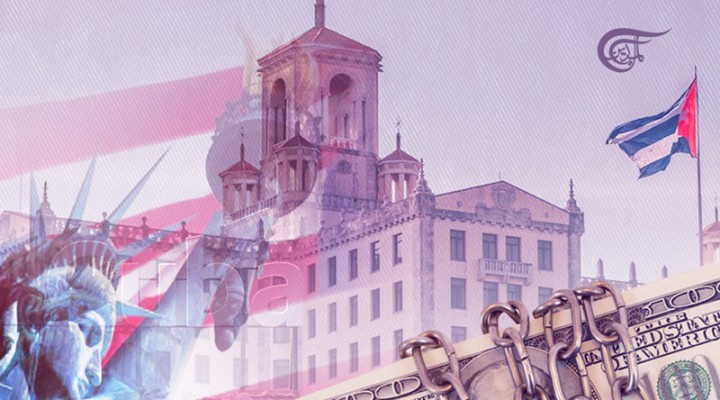 The recent Miami organised riots in Cuba set the pretext for a new round of US aggression against the little socialist country, another charade in the six decades’ hybrid war.

On Sunday 11 July a dozen rallies of between 100 and 500 people took place across Cuba, coordinated by and with wristbands and bags from the Miami based Latin-American Youth Network for Democracy, funded by Washington and under the command of counter-revolutionary Rosa María Payá. Many of these rallies turned into riots with vehicles smashed and shops looted.

No doubt a number of young people joined in, incited by economic hard times. However, the illusion that these riots represented a widespread rejection of the Cuban revolution was quickly refuted by larger rallies, once again rejecting US interference, and including a 200,000 person rally in Havana on July 17. Asserting independence is a regular practice in Cuba.

Cuba’s Foreign Minister Bruno Rodriguez pointed to a massive US-based social media campaign, which conveyed the illusion of a social uprising. British academic Helen Yaffe, from Cuba, reported on the use of ‘SOSCuba’ and ‘Humanitarian Corridor’ hashtags, “with bots and troll farms being used to disseminate messages on Twitter through fake accounts – one doing five retweets per second on 10 and 11 July”.

In a great US tradition, Miami mayor Francis Suarez called for the bombing of Cuba. This effective cyber-attack, foreshadowing military aggression, mirrors campaigns used during the 2019 coup in Bolivia and around the 2011 ‘Arab Spring’ scams in Syria and Libya.

A week later, Cuba was quite calm. Rapid rejection of the provocations came despite economic pressure from the US blockade – and the simultaneous blockade on Cuba’s key partner Venezuela – and from the COVID-19 pandemic, which is still causing many deaths after it crushed Cuba’s tourism income.

Following the path set by Trump, and departing from his role in the Obama administration which felt obliged to reopen diplomatic relations with Havana, President Biden announced a new phase in Washington’s long hybrid war against Cuba.

With typical doublespeak (it would be trivialising to call it simple hypocrisy) Biden said:

“The United States stands with the brave Cubans who have taken to the streets to oppose 62 years of repression under a communist regime … my administration is imposing new sanctions targeting elements of the Cuban regime responsible for this crackdown … to hold them accountable for their actions. This is just the beginning.”

In reality, these ‘sanctions’ are illegal unilateral coercive measures (UCMs). Those imposed on Cuba have been overwhelmingly condemned by the international community  for the last quarter century; most recently by 184 to 2 against (the USA and “Israel”) with 3 abstentions.

The reversion to calm was mostly not seen in the western media, as pro-Cuban Revolution rallies were either not covered at all or were portrayed as anti-Cuban rallies. Enthusiastic ‘anti-communists’, echoing the Washington line, even used photos of rallies in Egypt, pretending they were from Cuba.

The US government knows very well that the Cuban Revolution enjoyed strong popular support from the beginning, and that is why Washington has long aimed to punish the Cuban people.

US official Lester Mallory had argued for this sort of punishment in 1960, to undermine support for the Cuban government:

“The majority of Cubans support Castro (the lowest estimate I have seen is 50%) … The only foreseeable means of alienating internal support is through disenchantment and disaffection based on economic dissatisfaction and hardship … every possible means should be undertaken promptly to weaken the economic life of Cuba …to bring about hunger, desperation and overthrow of government” (Mallory 1960).

We can see the same punishment at work today in other stubborn, independent countries such as Syria, Iran, Nicaragua and Venezuela. Former US Secretary of State Mike Pompeo infamously said in 2018 that Iran’s government must follow US directions “if they want their people to eat”.

Cuba, in its 2018 report for the UN, pointed out that the US blockade of the island (a combination of ten laws and decrees) since 1962 has breached the UN Charter and GATT-WTO trade law, while violating the rights of third party sovereign nations.

These ‘sanctions’ in US law have been accompanied by “prohibitions, threats and blackmail” against third parties, by US diplomats. They are measures aimed at “bringing the Cuban people to its knees by hunger and disease” (MINREX 2018: 51-55).

This is the same US government that now expresses solidarity with “the brave Cuban people”.

In fact, Cuba has survived six decades of multiple crises – all of them generated or exploited by Washington – building amongst other things, world class health and education systems and the largest doctor training program in the world.

Has Washington served its own people nearly as well?

Eyewitness Report From Havana: Cuba’s Struggle Against US Imperialism

Who Will Hold the U.S. Accountable Over Cuba?

THE TRUTH: What’s Really Going On in Cuba