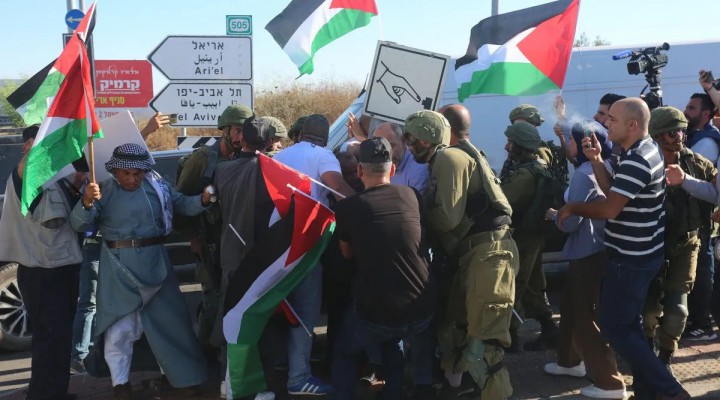 When Israel’s violations are caught on camera, it seeks to scapegoat the identifiable individuals only in order to safeguard its institutions. Israeli media quoting the Israeli Defence Forces’ Chief of Staff Aviv Kochavi concerning the recent (and normal) brutality of soldiers beating up Palestinian detainees must be seen within the context of visibility, rather than an actual attempt to address colonial violence.

The beating was a “severe incident that is repugnant and directly contradicts the values of the IDF,” claimed Kochavi in response to the video which went viral on TikTok. The soldiers from the Netzah Yehuda battalion were suspended and military police are now in charge of the investigation. The battalion has been linked to other violations against Palestinians and the current violence has sparked criticism from Israel’s Minister of Diaspora Affairs, Nachman Shai, who criticised Kochavi for taking a lenient approach.

However, the fact remains that Israel is inherently violent; it has normalised violence through its education system and the central role played by the IDF within Israeli society. Had the beating not been caught on camera, which Israeli minister would have spoken out against the violence which sustains Israel’s colonial structure?

If the IDF is as moral as it claims to be, why does it distinguish across the spectrum of violence which it unleashes against Palestinians, and what is its motive for speaking out against it only occasionally? When settlers and soldiers routinely assault Palestinians in the occupied West Bank, and Gaza is bombed periodically by the aforementioned “moral” IDF, silence is generally the order of the day until Israel plays its “security” and “self-defence” cards. One violent battalion is only part of the state’s narrative. While accountability is necessary, the fact remains that Israel’s self-adopted impunity detracts from true justice and establishing culpability. How can a colonial enterprise that thrives on violence hold segments of its own structures accountable, when the enterprise itself would collapse without such violence?

Even prior to the 1948 and ongoing Nakba, Zionism legitimised violence. Plan Dalet, adopted formally in March 1948, is testimony to what Israel would ultimately become and remain. The difference is that as decades passed and Israel’s influence in the international community increased, its violence became normalised as part of the colonial security narrative. Within Israel, violence was legitimised through claims about security and self-defence, while the international community adopted the same approach, in overt indifference to the colonial process it continues to enable in Palestine.

Israel’s violence is clear for all to see, yet social media has altered its visibility. When a civilian shares a video online it has far more impact than news reports; humanity takes centre stage and violence is no longer legitimised. While Israel will certainly not collapse due to such activism, it is through these individual actions that its security narrative is being exposed for the sham that it is, and is becoming irrelevant; legitimising violence is no longer protected by the colonial structure. Judgment is passed on the actions, which Israel protects through the same structures tasked with perpetuating and investigating violence, and the international community dismisses it all in any case by its use of the word “alleged”, even when evidence is provided and culpability is obvious. What will matter ultimately is whether a collective decision will be made to connect the actions of individual soldiers with the state’s violence and brutal security apparatus. In the absence of such action, Israel’s violence will be preserved and protected by its own impunity.

Israel's visible violence is protected by its own impunity