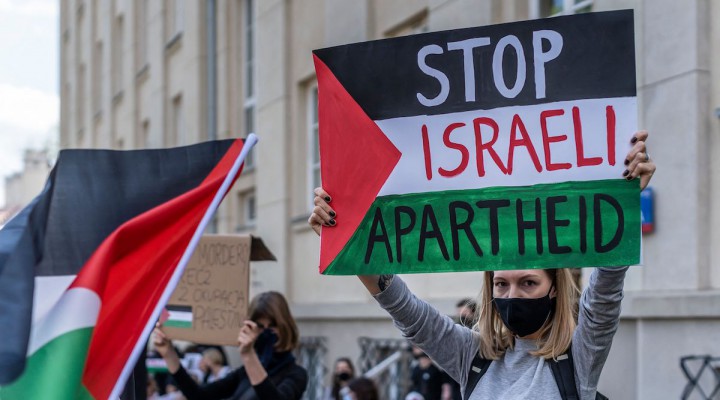 While Palestinians have been calling out Israeli apartheid for years, it was the non-governmental organisation B’Tselem that made the headlines a year ago with its designation of Israel as an apartheid state. Twelve months later, Israeli Foreign Minister Yair Lapid has expressed concerns that the label will stick, for no other reason than anti-Israel sentiment, if he is to be believed.

“We think that in the coming year, there will be debate that is unprecedented in its venom and its radioactivity around the words ‘Israel as an apartheid state’,” Lapid told Israeli journalists during a briefing on Zoom.

The International Criminal Court has determined that Israel has committed war crimes, and the UN Human Rights Council’s open-ended Commission of Inquiry will also be looking at such crimes committed by the settler-colonial state. Israeli rhetoric treats both as intrusions in its domestic affairs completely dissociated from its violations of international law. The state and its apologists simplify the slightest semblance of justice as an anti-Israel campaign instigated by the Palestinian people.

When B’Tselem spoke, the world listened, even if only briefly. Next up was Human Rights Watch in April last year when its report, “A Threshold Crossed” pointed out that, “Israeli authorities are committing the crimes against humanity of apartheid and persecution.”

Israel is now really concerned. Not about the fact that it is clearly an apartheid state, but about the cracks in its narrative being exposed from within and influencing global public opinion.

The privileged standing of Israel within the international community is heavily dependent upon Palestinian oblivion, which is why its security and “self-defence” narrative has become a convenient catchphrase for determining its ability to act with total impunity. Even within the context of the ICC and the UNHRC’s investigations, Israel retains the upper hand through its refusal to cooperate and the international community’s double standards when it comes to violations of international law. The parameters, after all, are not set in stone for powerful states, the former colonial powers which support Israel’s colonial enterprise.

It is unfortunate that Palestinian voices calling upon the international community to recognise Israeli apartheid were ignored. It is, after all, their narrative as the colonised population which should be at the helm, if justice is indeed to be served and the Palestinian people’s legitimate rights reclaimed.

Israel’s concern about its image is one thing; accountability for its apartheid is another. The international community has so far not given any evidence that it is willing to consider Israel’s crimes, including apartheid, as violations that require justice. Research, commissions of inquiry and statistics have built a thorough picture for reference purposes, but nothing else.

However, if Israel is expressing concern that its purported pristine image can be tarnished, why not go further? If it found B’Tselem’s designation so incriminating that it felt the need to harass the staff by throttling their freedom of expression even though the NGO’s findings were based on fact, it stands to reason that Israel’s narrative, fabricated as it is, thrives upon oppressive violence and the acquiescence and silence of the illegal settler population.

Sadly, though, Israel has been able to rely on the international community to silence Palestinian voices. Non-binding resolutions at the UN General Assembly have played perfectly into Israel’s demands, particularly and unfortunately also due to the Palestinian Authority’s eagerness to portray symbolism as political victory.

The apartheid label will only be “venomous”, to quote Lapid, if it is applied symbolically to silence Palestinians through the same violations that have become their daily, and normalised, experience. It is incumbent upon the international community, therefore, to stop exploiting accurate terminology for Israel’s benefit. Its apartheid system imposed on the people of Palestine needs to have consequences for the colonial state. Palestinians are the victims; their voices are far more important than any of Lapid’s insidious concerns.