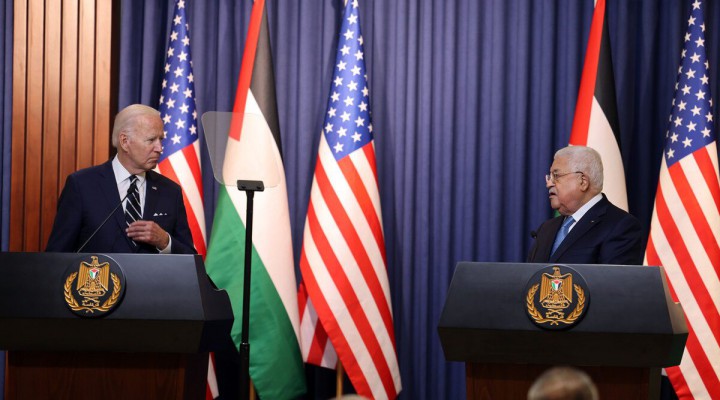 The US preoccupation with the Palestinian Authority possibly losing control over the Israeli-occupied West Bank has resurfaced, at a time when Mahmoud Abbas is adamant about pursuing full UN membership for Palestine, despite Washington threatening to use its veto. The message is clear: the US wants the PA to be in charge, but it also wants to remain in charge of the PA. Hence, its opposition to the bid at the UN Security Council which the PA is considering.

PA officials are giving the Biden administration much to hope for when they equate internationally-recognised Palestinian statehood with keeping the two-state compromise alive, at least rhetorically. The US, especially since Joe Biden took office, has been keen to renew its two-state discourse commitment, and it needs the PA’s compliance in the matter.

America’s main concern is the rise of armed resistance in the occupied West Bank, which it does not contextualise within the reality of decades of PA oppression — in collaboration with the Israeli occupation security forces — of the Palestinians. Its need to bolster the PA is indicative of the strength of Palestinian resistance. US Assistant Secretary of State for Near Eastern Affairs Barbara Leaf reportedly told senior PA officials that the pursuit of full membership at the UN will not act as a deterrent against Palestinians involved in resistance.

Only now, though, it is not just about Palestinians involved in resistance activities or those affiliated with political parties whose policies are completely different from those of Fatah, which dominates the PA. The economic crisis and the PA’s lack of funds have contributed to a simmering discontent which may well give way to collective anger on the streets. Abbas will then find it hard to blame a select group of Palestinians involved in resistance when most of the population shares similar grievances. The US is equally conscious of this fact, and would not desire a situation where the masses recognise their own power against the illegitimate government in Ramallah which still refuses to hold democratic elections. Hence, Washington’s repeated insistence that Israel takes steps to stabilise the PA.

In this regard, the US enjoys the support of Israel’s domestic intelligence agency, Shin Bet, according to Axios news reports. Shin Bet Director Ronen Bar reportedly told Leaf, “The situation on the ground is worse than it seems.” An accurate reflection, but from the wrong context, as Shin Bet will definitely not blame the PA’s security coordination with Israel; its economic dependence upon Israel and the international community; the brutal aggression of the PA’s security services against Palestinians; or Abbas’s insistence on tethering Palestinians to the two-state paradigm and the UN’s humanitarian project.

The occupied West Bank has long been perceived as a contrast to Gaza, yet the Palestinian people are enduring their own experiences of Israeli colonial violence and that of the PA’s corrupt officials and security services. What the US is suggesting is unsustainable. No amount of meagre concessions will work if the tipping point is reached. There is more than enough revulsion among Palestinians for Israel’s colonial politics and the PA’s subservience in return for clinging to power. Of course, Israel can increase its violence, pretend to engage diplomatically with the PA and buy more time for Abbas and his inner circle, during which Israel will also be increasing its de facto annexation of what remains of Palestine. However, it is also highly likely that the US is just buying time before Palestinians experience a change in their domestic politics, especially if the PA is unable to sustain itself.