HOME / WORLD / Trump and Congress Double Down on Demonizing Iran 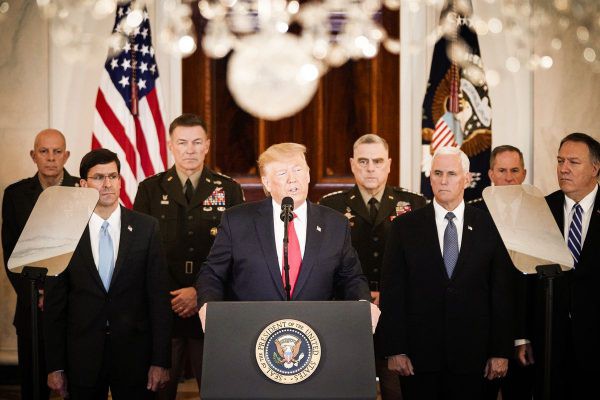 Will the national security nightmare ever end?

If one seriously seeks to understand how delusional policymakers in Washington are it is only necessary to examine the responses by the president and Congress to the assassination of Iranian Major General Qassem Soleimani. The first response came in the form of a Donald Trump largely incoherent nine-minute self-applauding speech explaining what he had done and why. It was followed by a House of Representatives War Powers non-binding resolution that was all theater and did nothing to limit the president’s unilateral ability to go to war with the Islamic Republic.

It was reported that the Trump speech had been hurriedly written by aides the night before it was given and that it existed in several competing drafts. It was full of out-and-out lies and half truths and intended to reassure the American people that the president was keeping them safe. The opening line might well be regarded as some kind of joke: “As long as I am President of the United States, Iran will never be allowed to have a nuclear weapon.” Trump has in fact done more to ensure that Iran will have a nuclear weapon than any other president through his abrupt withdrawal from the Joint Comprehensive Plan Of Action (JCPOA) and his assassination of Soleimani, which together have convinced the Iranian leadership that there is no possibility of a reasonable negotiated solution when dealing with the American president, even when he claims he wants to “talk.”

Trump then went on characteristically to eulogize our brave soldiers on far flung battlefields before lying again, saying “For far too long — all the way back to 1979, to be exact — nations have tolerated Iran’s destructive and destabilizing behavior in the Middle East and beyond. Those days are over. Iran has been the leading sponsor of terrorism, and their pursuit of nuclear weapons threatens the civilized world. We will never let that happen.” Lie one is that the “destructive and destabilizing behavior” actually has Made in U.S.A. stamped all over it. Lie two is “leading sponsor of terrorism,” an honor that belongs to Israel, Saudi Arabia and the United States, in that order. And lie three is that Iran “pursued” nuclear weapons. It has never done so.

Trump them boasted that “Last week, we took decisive action to stop a ruthless terrorist from threatening American lives. At my direction, the United States military eliminated the world’s top terrorist, Qasem Soleimani. As the head of the Quds Force, Soleimani was personally responsible for some of the absolutely worst atrocities.” Trump’s preening was again wrong on every count: Soleimani is no terrorist by any reasonable definition, nor is there any evidence that he threatened American lives. And Trump and his chorus of neocons cannot name a single “atrocity” committed by the man

The president claimed that Soleimani “…viciously wounded and murdered thousands of U.S. troops, including the planting of roadside bombs that maim and dismember their victims,” a particularly absurd charge suggesting that Trump believes that any American soldier who died in Iraq or Afghanistan did so at the hands of the Iranian Major General. By the same logic, the musical chairs series of American generals that have served in Afghanistan, Iraq and Syria have murdered hundreds of thousands of people. If Trump wants to start counting fatalities he should perhaps start with David Petraeus.

Piling Ossa on Pelion, Trump declared that Soleimani “…orchestrated the violent assault on the U.S. embassy in Baghdad. In recent days, he was planning new attacks on American targets, but we stopped him.” There is no evidence whatsoever to support either assertion and Trump then goes on to ascribe all the problems of the Middle East to Iran, ignoring the roles played by others, most notably Washington, Israel and the Saudis. He also roundly condemned the JCPOA before asserting falsely that “Three months ago, after destroying 100 percent of ISIS and its territorial caliphate, we killed the savage leader of ISIS, al-Baghdadi…” In reality, ISIS was defeated by the Syrian Army and its allies Russia and Iran, the very countries that Trump has continued to vilify even as he struts his anti-terrorist credentials. Qassem Soleimani played a major role in the destruction of ISIS.

The only good things in the Trump speech were that it was short and the president did not find it necessary to say a whole lot of good things about Israel. Interestingly, no one in the mainstream media or in the political chattering class made much effort to challenged Trump on the “facts” he cited, though there was some pushback from mostly Democratic congressmen who stated that they could not see any “imminent threat” in the evidence that the Administration produced during a classified briefing. The actual war powers concurrent resolution that passed in the House last Thursday was symptomatic of the unwillingness of the political opposition to take on the illegal and immoral wars in the Middle East themselves – it had no teeth and will not change anything.

The resolution’s subject line “Directing the President pursuant to section 5(c) of the War Powers Resolution to terminate the use of United States Armed Forces to engage in hostilities in or against Iran” actually is misleading. And the first thing the text does do is slam Iran with the same dubious “facts” employed by Trump, including that “The Government of Iran is a leading state sponsor of terrorism and engages in a range of destabilizing activities across the Middle East. Iranian General Qassem Soleimani was the lead architect of much of Iran’s destabilizing activities throughout the world.”

The resolution includes “In matters of imminent armed attacks, the executive branch should indicate to Congress why military action was necessary within a certain window of opportunity, the possible harm that missing the window would cause, and why the action was likely to prevent future disastrous attacks against the United States.” It then goes on to explain that “When the United States uses military force, the American people and members of the United States Armed Forces deserve a credible explanation regarding such use of military force…” because “The War Powers Resolution (50 U.S.C. 1541 et seq.) requires the President to consult with Congress ‘in every possible instance’ before introducing United States Armed Forces into hostilities.” It concludes with “Congress has not authorized the President to use military force against Iran.”

It would seem to be a devastating critique of the Trump Art of War but then comes the wiggle room “…Congress hereby directs the President to terminate the use of United States Armed Forces to engage in hostilities in or against Iran or any part of its government or military, unless Congress has declared war or enacted specific statutory authorization for such use of the Armed Forces; or such use of the Armed Forces is necessary and appropriate to defend against an imminent armed attack upon the United States, its territories or possessions, or its Armed Forces, consistent with the requirements of the War Powers Resolution. Nothing in this section may be construed to prevent the President from using military force against al Qaeda or associated forces…” In other words, all Trump has to do is claim “imminent threat” or that he is attacking “terrorist associated forces” and he is home free no matter what he does, particularly as the resolution itself is non-binding.

The sheer ignorance and arrogance of elites in Washington combined with a colonialist mentality that dismisses Asians and Africans as unthinking “wogs” who will do one’s bidding if they are confronted with punishment is currently on display. It was inevitable that Iraq would demand the departure of U.S. troops after thirty-four Iraqi militiamen were killed by American drone and air strikes, but many in Washington just didn’t get it. Trump threatened, in characteristic fashion, to respond with sanctions, but now Iraqi Prime Minister Adel Abdul Mahdi has made it official in a phone call to Secretary of State Mike Pompeo, demanding a plan and timetable for the removal of the American soldiers. The State Department has indicated that it is not prepared to discuss the matter.

Some pundits who should know better have predicted that the withdrawal of U.S. soldiers will not take place because Iraq somehow “needs” the United States. And besides, there will be economic consequences if Iraq does go ahead to insist on an American withdrawal. But sometimes abstractions prove to be more powerful than material incentives. The United States violated Iraqi sovereignty not once but twice and murdered 34 Iraqis in the process. Pompeo can huff and puff all he wants and Trump can mouth his illiteracies, but nothing changes the fact that the United States did things it did not have to do based on a delusional view of the Middle East and will have to pay a price. Minus a presence in Iraq, Syria will be untenable and one might hope that once the U.S. loses its ability to directly confront Iran on the ground the whole house of cards just might collapse, leading to Washington’s gradual departure from the region. That would be good for the region and also for the United States even if Israel and the Saudis, who prefer to have Americans fight and die in their wars, might object.

0 thoughts on “Trump and Congress Double Down on Demonizing Iran”