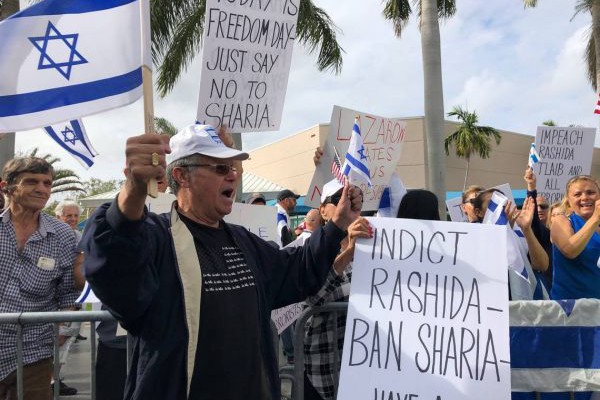 Friends of Israel find that it cuts two ways

No group in the United States has labored so hard as the friends of Israel to destroy the First Amendment to the Constitution, which commits the government to prohibit any “abridging the freedom of speech…or the right of the people peaceably to assemble.” Ironically, of course, Congressmen and government officials who have taken an oath to uphold the Constitution against all enemies domestic and foreign have themselves been cheerleaders as the Israel Lobby carries out its devastation of the fundamental rights of every American. Many in government at all levels repeatedly boast about their undying love for the Jewish state, which is a foreign nation and no ally, even as they enthusiastically sign on to legislation that criminalizes criticism of Israel or requires recipients of government funding to sign a no-boycott pledge.

Hubristic due to their great political power, wealth and arrogance, what the Israel firsters tend to forget is the old homespun warning that “what is good for the goose is good for the gander.” Change the rules for what people can say or do and it will sooner or later come back to haunt you when you want to speak or associate freely.

In the past, Jewish groups like the Anti-Defamation League (ADL) traditionally fought for free speech and association to advance their own tribal interest as they frequently promoted unpopular left-wing causes that most of the population opposed. Most American communists were Jews, for example. Now that that particular battle has been won they have switched gears in their war against what they perceive as anti-Semitism and have become leaders in the promotion of hate crime legislation, censorship of criticism of Jews and Israel on the internet, and legislation that would criminalize or otherwise punish supporters of an anti-Israel boycott.

Twenty-eight states currently have legislation penalizing those who support the non-violent Boycott, Divestment and Sanctions (BDS) movement and there are several bills pending in Congress that would do the same on the federal level, including one piece of legislation, The Israel Anti-Boycott Act, that includes criminal financial penalties and prison time for those convicted. The original version of the bill included draconian punishment: “Anyone guilty of violating the prohibitions will face a minimum civil penalty of $250,000 and a maximum criminal penalty of $1 million and 20 years in prison.”

And the White House is equally engaged in the hot war against any and all aspects of anti-Semitism. President Donald Trump has recently signed an executive orderthat defines being Jewish as both a nationality and religion under Title VI of the Civil Rights Act of 1964, making it easier for the Department of Education to cut the funding for institutions that allow speakers, organizations and events that the White House regards as “anti-Semitic.” BDS is one such organization and has been particularly targeted.

There have recently been two stories that illustrate what might happen when one wants to limit what people can say. The first involves highly respected international journalist Abby Martin.

Martin is a former teleSUR presenter and is best known as the creator of The Empire Files. She earlier in her career worked at Russia Today as an interviewer and investigative journalist. She is politically progressive and a critic of Israel’s apartheid government. Abby Martin was recently barred from speaking at a planned late February International Critical Media Literacy Conference that was going to be held at Georgia Southern University. Her crime consisted of refusing to “sign a contractual pledge to not boycott Israel,” which had nothing to do with the conference itself. In Georgia, as well as in a number of other states, anyone receiving money, or using state facilities has to confirm in writing that he or she will be in compliance with the state’s anti-BDS law.

Martin, who has also been subjected to censorship on YouTube, tweeted subsequently, “After I was scheduled to give a keynote speech at an upcoming Georgia Southern conference, organizers said I must comply with Georgia’s anti-BDS law. I refused and my talk was canceled. The event fell apart after colleagues supported me.” In a separate message she added “This censorship of my talk based on forced compliance to anti-BDS laws in Georgia is just one level of a nationwide campaign to protect Israel from grassroots pressure. We must stand firmly opposed to these efforts and not cower in fear to these blatant violations of free speech.”

The second story, which appeared in the Miami Herald and the Jerusalem Post, describes how a veteran police officer with thirty-eight years on the force in the southern Florida town of Bay Harbor Islands was suspended because his wife posted comments describing Palestinian Congresswoman Rashida Tlaib as a “Hamas-loving anti-Semite.” He “Liked” her comments, which resulted in the action taken against him.

The officer, identified as one Corporal Pablo Lima, is currently on administrative leave and will have to submit to an internal affairs investigation. The town’s manager J.C. Jimenez issued a statement that “The content of the social media posts that were brought to our attention are not consistent with our Town’s values and policies.” The town’s police department explicitly prohibits any expressions by employees that “ridicules, maligns, disparages, or otherwise expresses bias against any gender, race, religion, or any protected class of individuals.”

Corporal Lima’s wife, Haifa-born Israeli Anabelle Lima-Taub, is no stranger to controversy involving her country of birth. She is the city commissioner for nearby Hallandale Beach, where she was censured at a January 23rd special meeting over Facebook posts that also related to Tlaib, repeating the claim that the Congresswoman was a “Hamas-loving anti-Semite,” and also adding that Tlaib might be considering making herself and others “martyr[s] and blow up Capitol Hill.” The Hallandale Beach board vote against Lima-Taub passed by 3 to 2, but it was also reported that dozens of Jewish supporters had attended the meeting at city hall, waving Israeli flags and holding signs supporting her statements.

Lima-Taub responded to the rebuke by repeating her claims in later social network posts. She complained in one post that “I am offended by anyone who is NOT OFFENDED by Rashida Tlaib’s hateful rhetoric and pro BDS and other radical dangerous views calling for the obliteration of Israel, literally off the face of the map. I remain unapologetic for my views that she is a danger to the peace process and demand an apology of her for relabeling Israel as Palestine on a map hanging on her wall in her congressional office.”

And it did not end there Lima-Taub gave an interview to the Miami Herald in which she explained that she opposes the congresswoman’s support of the “anti-Israeli” BDS movement, which she considers to be equivalent to supporting Hamas and Hezbollah. Lima-Taub’s posts on the subject attracted some vitriol directed at Tlaib from her supporters, including that Tlaib “took her [congressional] oath on the Koran,” “openly hates Jews” and “supports the people who flew planes into our [New York] twin towers and killed over 5,000 people.”

Anabelle Lima-Taub has blamed her husband’s troubles on “corruption” and an unnamed lobbyist, but she might well exercise a bit of introspection and realize that her inability to criticize Muslims without consequences to her and her husband is part and parcel of the same mentality that seeks to criminalize whatever one chooses to call “hate speech,” which includes expressions of “anti-Semitism.” Free speech is free speech, no matter how loathsome or misguided. Government officials should be allowed to express private opinions outside the parameters of their public responsibilities, just as students at a university should be able to invite speakers to controversial conferences or seminars without requiring those invited to sign a paper pledging that they will not criticize a certain country. Once you let the genie out of the bottle and allow rules-makers to take away fundamental rights it is very hard to induce that genie to go back in.