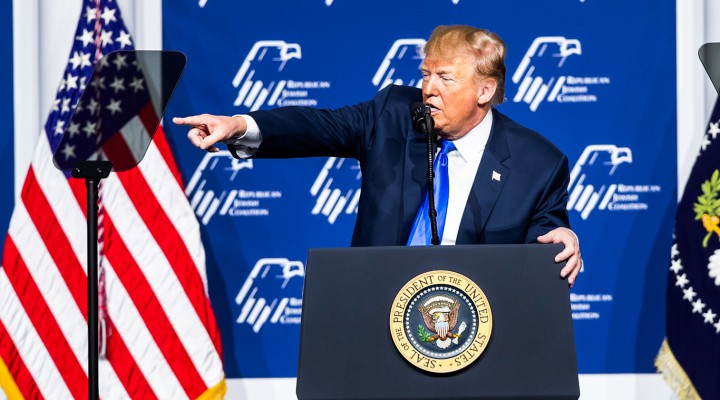 Trump’s anti-Semitism bill is unlikely to dampen the flames of hatred towards Jewish Americans or make them feel safer; indeed, outlawing criticism of Israel may have the opposite effect.

MPN– President Trump is expected to sign an executive order today purporting to target anti-Semitism on college campuses. However, the measure is understood on all sides as an attempt to outlaw the Boycott, Divestment and Sanctions (BDS) movement and criticism of Israel more generally.

The order would mean educational institutions receiving federal money would be subject to losing all funding if the government deems they are not doing enough to stamp out anti-Semitism, which, as the new bill explicitly states, includes critique of the Israeli government. The bill is based on a portion of the federal Civil Rights Act of 1964 that requires schools and colleges not to discriminate based on race, nationality, or a host of other factors. Under Trump’s plan, Judaism will be reclassified as both a nationality and race, rather than a religion.

For some, it is little more than an attempt to silence criticism of Israel’s apartheid policies and human rights abuses of Palestinians.

Modeled on the anti-South African Apartheid campaign in the 1980s, the BDS movement is an international attempt to peacefully bring economic and social pressure onto the Israeli government to comply with international law. Its imminent banning in public universities is a testament to the power that the U.S. and Israeli governments judge it to have.

While Israel breaks international law, the United States supports and covers up its actions both internationally and domestically, often by vetoing any organized response from the United Nations or other bodies. By removing First Amendment protections to criticism of the state in universities, organized resistance to its actions becomes far more difficult, as the government outsources the quashing of dissent to academics and administrators, who will have to comply or face financial ruin.

26 U.S. states already require contractors to effectively swear an oath of loyalty to Israel in order to be employed, meaning many students must renounce their beliefs in order to find a job. This is not merely a formality; last year a Texas school speech pathologist was fired for refusing to sign a pledge promising not to boycott Israeli goods.

Yet inside the U.S., and particularly among young Jews, support for and identification with Israel is dropping. One survey found that only 40 percent of San Franciscan Jewish millennials were comfortable with the idea of a Jewish state. Much of the change in recent years has come following the rightward drift of Israel, so far right in fact that even former Prime Minister Ehud Barak has warned the country has been taken over by fascism, but the campaigning of BDS activists has also had an effect.

Jewish American professor Noam Chomsky revealed that when he gave talks at universities criticizing Israel in the past he would need police protection as his meetings were constantly broken up by enraged demonstrators. Today, he says, he gets hundreds of engaged and knowledgeable students listening intently to his critique. “Palestinian solidarity is one of the biggest issues on campus,” he stated in an interview with Democracy Now!: “[There has been an] enormous change in the last few years.”

With Trump’s recent ban, universities are essentially under pain of death to silence any criticism the government deems too radical, which, given the composition of the current administration, is likely to include the likes of BDS or Chomsky, meaning that organized resistance to any of Israel’s actions will be hampered, allowing for more aggressive policies to go unchecked.

Mike Prysner, director of the new documentary Gaza Fights for Freedom and a proponent of BDS, described Trump’s latest move as an attack on Palestine and on human rights, alleging that under the new rule, he would not be allowed to screen his film in universities.

A very major attack on Palestinians, and the nonviolent movement to support them in the US—while simultaneously laying dangerous groundwork to attack the “disloyal” Jewish community https://t.co/Yr2GKTHWxO

In their response to the executive order, liberal Jewish group J Street accused the president of “turning the issue of anti-Semitism into a partisan political issue.” Trump previously claimed Rep. Ilhan Omar to be an anti-Semite, effectively conflating criticism of Israel with anti-Semitism. Likewise, even Jewish American Bernie Sanders is under attack for alleged anti-Semitic beliefs. In Great Britain, too, Labour Party leader Jeremy Corbyn, a lifelong anti-racist and Palestinian rights campaigner, has been smeared as a secret Jew hater. All the while, like the U.S., the head of state makes openly derogatory remarks towards Jews with relatively little censure. Current Prime Minister Boris Johnson wrote an entire book depicting Jews as untrustworthy schemers who controlled the media, as well as dozens of other racist depictions of other groups.

The move is merely the latest in a line of actions the government has taken to shape the debate around Israel inside universities. For instance, in August the Department of Education, headed by Betsy DeVos, ordered both Duke and the University of North Carolina at Chapel Hill to alter their joint Middle Eastern studies programs, as it had determined they were presenting Israel in too negative a light. Henry Reichman, chair of the American Association of University Professors’ Committee on Academic Freedom and Tenure described DeVos’ interference as a “chillingly inappropriate political intrusion into curricular decisions best made by faculty.”

The current administration has gone further than any other in American history in endorsing the actions of the government of Israel. Last month, Secretary of State Mike Pompeo announced that the U.S. had shifted its decades-long policy in formally opposing Israeli settlements, illegal under international law. Trump also moved the U.S. embassy to Jerusalem, delighting the right-wing both domestically and in Israel.

While the move has generated condemnation from activists, others see it as a step forward.

The Simon Wiesenthal Center, an organization that staunchly supports Israel, claimed that Trump’s brave action “sends a global message at a time of surging anti-Semitism on both sides of the Atlantic,” claiming that it will have an “immediate impact” on American campuses “plagued with anti-Semitic and anti-Israel acts.” The Republican Jewish Coalition was also in full support of “the most pro-Jewish president” in American history. For former senator Norm Coleman, it was a “truly historic and important moment” for Jewish Americans.

In contrast, J Street denounced the plan. “Trump’s Executive Order is a cynical, harmful measure designed to suppress free speech on college campuses,” it stated, claiming that the move would have a “chilling effect” and would lead to a “crack down on campus critics of Israel.” It also raised the threat of fascism as a more serious threat to American Jews than anti-Apartheid activists:

We feel it is misguided and harmful for the White House to unilaterally declare a broad range of nonviolent campus criticism of Israel to be anti-Semitic, especially at a time when the prime driver of anti-Semitism in this country is the xenophobic, white nationalist far-right.”

"This executive order, like the stalled congressional legislation it is based on, appears designed less to combat anti-Semitism than to have a chilling effect on free speech and to crack down on campus critics of Israel."
– @JeremyBenAmi https://t.co/KfZB6TOAjx

The announcement comes even as Trump is embroiled in another anti-Semitism scandal of his own. The president outraged many Saturday with a speech he gave at the Israeli American Council National Summit. Trump told the crowd “A lot of you are in the real estate business because I know you very well. You’re brutal killers, not nice people at all. But you have to vote for me, you have no choice,” insinuating his Jewish audience cared about nothing but their own wealth. CNN noted his comments drew applause and cheers from the audience.

Trump constantly invokes the idea that Jews are interested only in money. In 2016 he told a group of Jewish Republicans “You’re not going to support me because I don’t want your money.” He had earlier insisted that he only wanted “short guys wearing yarmulkes” to count his cash, as they were the best. And in his own words, American Jews have dual loyalty to Israel.

Under a Trump presidency, right-wing anti-Semitic attacks have steeply increased, most notably in mass shootings like at the Tree of Life Synagogue in Pittsburgh, PA and the Poway Synagogue near San Diego, CA. Meanwhile, Neo-Nazis, many of them carrying pro-Trump banners, marched in Charlottesville, VA, chanting, “Blood and soil” and “Jews will not replace us.” The president refused to condemn the events, calling the white supremacists “very fine people.” He has also appointed many open anti-Semitic racists to positions of power, including Steve Bannon, who expressed disgust at the idea of Jewish students at his children’s school, and Sebastian Gorka, who continues to wear regalia linked to Hungarian Nazis who helped perpetrate the Holocaust during World War Two. And after former Ku Klux Klan Grand Wizard David Duke endorsed him, Trump refused to disassociate himself with him.

Thus, with the far-right in ascendency, reaching as high as the White House, the anti-Semitism bill is unlikely to dampen the flames of hatred towards Jewish Americans or make them feel safer; indeed, outlawing criticism of Israel may have the opposite effect. The bill, as many have pointed out, appears aimed more at stymieing a growing movement of students disillusioned with the conduct of a top ally of the U.S. government. If the Trump administration were serious about stamping out anti-Semitism, it would look at itself first and foremost.