Is Washington Under Alien Control? 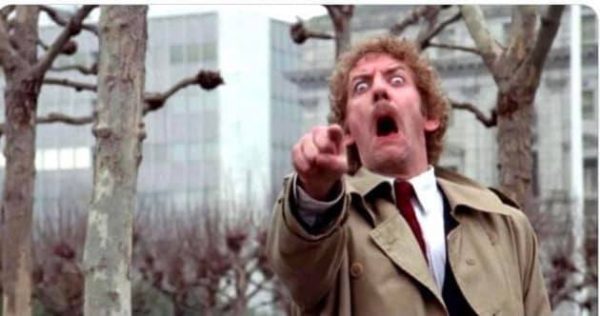 Biden and Blinken get everything backwards in terms of US interests

The drama currently unfolding in which the Biden Administration is doing everything it can to provoke a war with Russia over Ukraine is possibly the most frightening foreign policy misadventure since the 1962 Cuban Missile Crisis and the 1967 Lyndon Johnson attempt to sink the USS Liberty and blame it on Egypt, either of which could have gone nuclear. I can well recall the Robert Heinlein sci-fi book The Puppet Masters, later made into a movie, which described how alien-slugs, arriving by way of a flying saucer landing in Iowa, invaded the earth and parasitically attached themselves to the central nervous systems of humans and became able to completely control their minds. What the humans know, they know. What the slugs want, no matter what, the human will do. And the tale gets really scary in geopolitical terms when some Secret Service Agents are “occupied” by the invaders and they are thereby poised to capture the President of the United States. I would point out that the movie came out when Bill Clinton was president, which should have provoked some concerns about whether it was fact or fiction.

Well, does anyone currently wonder why I think of The Puppet Masters when an incoherent Joe Biden in particular makes a speech? And also consider the befuddled look of Secretary of State Tony Blinken or the bewildered expressions of Vice President Kamala Harris or Chairman of the Joint Chiefs of Staff General Mark Milley, all of which might also suggest that the slugs now completely control the Administration. The Biden and Blinken possibly slug-controlled automatons are now stating their conviction, based on no evidence whatsoever, that Russia is about to invade Ukraine and they are threatening sanctions like Putin “has never seen before.” There will no doubt be more slug-derived pronouncements to reinforce that warning in the next few days after the latest round of talks breaks down. Evacuation of US Embassy staff families in Kiev is already underway, deliberately escalating rather than attempting to defuse the crisis which could lead to nuclear war, destroying the human race and replacing it with the alien slugs.

Consider for a moment the inconsistencies and sheer contradictions in US foreign policy, which might support the credibility of the alien slug theory. The State Department’s management of foreign relations is supposed to serve the interests of the American people, but has not actually done so for decades. Can anyone explain why Washington’s foreign policy during the decade 2010 to 2020 constantly hammered at Russia, which, if anything, should have been the one country with which the US would seek to have a respectful relationship. Where is the logic in condemnation of Russia’s non-violent annexation of the Crimea, which was carried out based on a long-term historic relationship and a popular referendum, while also enabling “allies” like Israel’s illegal occupation and annexation of both Palestinian and Syrian land which has relied on force majeure to drive hundreds of thousands of local inhabitants from their homes. And then there are the Saudis using American made weapons to terrorize and kill the people of Yemen. Slug Biden is now considering aiding the murderous Saudi onslaught by declaring Yemen’s Houthis to be terrorists, legitimizing their slaughter.

Even if one rejects the alien slug theory, at a minimum, there has been a great deal of hypocrisy in terms of how Washington deals with the rest of the world and that has been increasingly the case under both Donald Trump and Joe Biden. Targeting and killing civilian populations and permanently driving them from their homes are, by the way, unambiguously war crimes and the United States is signatory to the Geneva Conventions that define the Israeli and Saudi actions as such. Israel, which claims a form of perpetual victimhood thanks to the so-called holocaust narrative, is the only nuclear power in the Middle East, though its arsenal is regarded as so secret that US government officials are not allowed to mention it, possibly another indication of alien slug control. It uses that advantage to carry out undeclared open and covert warfare against its neighbors, most notably targeting Syria and Lebanon as presumed proxies for its number one designated enemy Iran. Saudi Arabia for its part does not seem to care at all regarding the devastation it is delivering on the largely defenseless Yemenis.

Israel goes far beyond the actions of any other belligerent nation in the world, and the US is the only nation that even comes close, as recent reports regarding a particularly reckless bombing in Syria suggest. Israel, often with American complicity, engages in covert sabotage and assassination operations inside Iran, which have been sometimes reported, though hardly condemned, in the mainstream Western media. Less well covered are the more-or-less routine bombing attacks conducted against Syria, frequently also violating Lebanese airspace when the Israeli jets stand off in the Mediterranean Sea to fire their missiles at the Syrian targets. It should be noted that attacking a nation with which one is not at war and which poses no direct threat is also a war crime, in this case a war crime that the Israeli and Saudi governments repeat on a regular basis without any objection coming from Washington, which itself has attacked Syria on at least four occasions while also illegally stationing troops inside the country to “protect” its oilfields.

A recent devastating attack by Israel on Syrian targets consisted of a missile strike launched by Israeli air force planes against the Mediterranean port of Latakia on December 28th. Israel’s attack on Latakia has to a certain extent shifted the focus of the war on Syria being conducted by Israel and the United States and their Gulf allies including the UAE and Saudi Arabia. In the past, the port was protected by its proximity to the major Russian base at Tartus in Syria and the actual presence of some Russian personnel assisting in Latakia ship cargo unloading operations, which threatens to bring Moscow more directly into the conflict. And as Washington is Israel’s enabler that will no doubt lead to US involvement in the UN and other fora if any attempts are made to limit or even condemn the Israeli actions. The situation is nasty and threatens to explode if Israel stages a false flag attack intended to lead to demands for direct military action by the US, a concern that some outside the Biden Administration have expressed.

What is particularly disturbing is the fact that while Israel and the Saudis continue to do their best to engage the United States in their own quarrels in the Middle East, President Joe Biden and Secretary of State Tony Blinken do nothing but look the other way so as not to annoy the Israeli leaders and their powerful domestic lobby in the US. At the same time, they unnecessarily provoke a nuclear armed and capable Russia and an emerging superpower China, both of which are regularly demonized both in the media and by leading politicians from both parties. The actions taken together are so irrational as to suggest that Robert Heinlein knew what he was writing about.

And then there is what might be described as the “hidden hand.” It should be observed that many of those US politicians and government officials most keen on baiting Russia are strong and vocal supporters of Israel. Many are neocons, who have penetrated the foreign and national security teams of both political parties and are dominant in the media while also having close ties to the Israeli government. Most of them are Jewish, to include all four of the top officials in the Department of State, while prominent politicians in both political parties, to include the president, have self-described as Zionists. For various reasons, many in the Jewish diaspora have a visceral hatred of Russia, so Israel in an odd way is part of the war party machinations to provoke an armed conflict over Ukraine.

That America is Israel’s poodle and both Russia and China are considered fair game to score political points is really the crux of the matter and it makes Americans complicit in Israeli crimes as Washington provides both arms and money as well as political cover to Jerusalem. It also reduces major US national interests involving Moscow and Beijing to sideshows and in so doing turns American national security on its head, supporting the unspeakable to make political points and ignoring what is important. One might even suggest that never before in history has a great nation so enthusiastically pursued policies that could easily lead to its own destruction. It is not in our interest, or even our survival, to continue along this path and it is past time that the politicians and bureaucrats begin to recognize that fact. Or maybe I should instead be addressing my advice to that alien-slug mothership hidden somewhere in a corn field in Iowa.

What the US Really Wants from Southeast Asia

0 thoughts on “Is Washington Under Alien Control?”