If You Say Democracy Often Enough the Voters Will Reward You 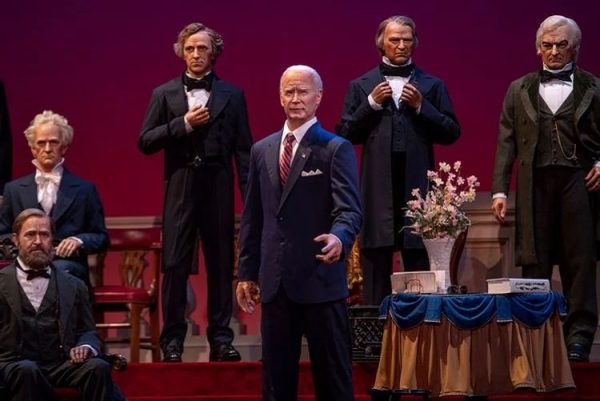 To be sure there is an election coming up today in the United States and President Joe Biden has clearly taken the low road in the lead up to it by speaking before friendly audiences and repeating over and over the bromides that cause the brain to go numb. During the past week it was all about saving “American democracy” from the MAGA barbarians. And Democracy is, inevitably, tied to the Democratic Party etymologically, which, in a sense, makes it the presumed sole possessor of the right stuff when it comes to delivering freedom to all, including most recently a truly delusional pledge by Biden to “free Iran.”

The problem for the president is that Bidenspeak is being seen by some as devoid of content, choosing to skip over any discussion of the actual policies that have benefitted or harmed the American people over the past two years. That omission is convenient as many voters look around and see high inflation, a struggling economy, surging crime rates and an open border that may have produced, according to Tucker Carlson, a tidal wave of as many as five million illegal immigrants in the country. And, of course, there is also the war threatening to go nuclear over the Russian intervention in Ukraine, a conflict that threatens no American interest but which nevertheless has been elevated into a genuine saga of good versus evil through the combined efforts of the US and British governments ably assisted by the western mainstream media.

And it has become a real war, thanks to the joint UK-US bombing of one of the Nord Stream pipelines that connect Russia to northern Europe. Washington has warned repeatedly that it would take steps to shut down the pipeline, which it regards as a security threat in that it makes Europe dependent on Russia for energy, and it appears that the plucky Brits did the dirty work. Britain’s then Foreign Minister Liz Truss reportedly texted US Secretary of State Antony Blinken immediately after the pipeline blew up, telling him “It’s done!” Neither Truss nor Blinken were apparently aware that Russian intelligence had penetrated the security on the connection and recorded the communication.

And, of course, it is all about Ukraine even if the ultimate objective by the US is to weaken Russia militarily while also removing President Vladimir Putin. Ukrainian President Volodymyr Zelensky has emerged as some kind of puppet master in his control of the White House, the US Congress and the mainstream media, drawing an estimated 60 billion dollars in economic and military aid from the US Treasury and also committing Washington to support his country until it “wins” against Putin. Zelensky, whose middle name must be Svengali, reportedly was involved recently in a phone call with Biden in which the US president expressed frustration over Zelensky’s frequently repeated demands for more money and weapons. Biden vented and even shouted but Zelensky wound up with the cash, some of which will certainly go to support the Ukrainian president’s various real estate holdings in Israel and Florida.

And then there is the “dirty bomb” story making the rounds. It has two components. First is the technology of a dirty bomb itself, which is a high explosive device that is seeded with radioactive waste that is lethal and contaminates a large area when it is detonated. A dirty bomb is considered a weapon of mass destruction and its use is categorized as a war crime, much like using a chemical or biological weapon. Second, there is the false flag aspect to the tale that is circulating. The Russian government, the source of the report, is claiming that Zelensky’s government is preparing to put together and detonate a dirty bomb somewhere inside Ukraine and before blaming the development on Putin and his government. That attribution of an action falsely to a country or government that was not involved is a false flag and the intention is to create a perception that someone is breaking the rules on what is allowed even during wartime.

False flags attacks were used most recently in the western supported insurgency in Syria, most notably at the Damascus suburb of Ghouta in 2013, where a chemical-weapons claimed attack that may have killed as many as 1700 people took place. The attack was inevitably attributed to the Syrian government by the United States but it was in fact, much more plausibly carried out by the rebels who controlled the area at that time.

So why would Zelensky detonate a dirty bomb within the area he controlled? Well, Zelensky has long sought increased and direct US and NATO involvement on his side in the fight against Russia. Being able to point to a major war crime that he would attribute to the Russians through a false flag operation might just be enough to do the trick and bring in larger scale western involvement. It is certainly something that Zelensky and his neocon advisers would consider an acceptable ruse de guerre. Given the effective neocon control over foreign policy and the media outlets in the US it would also in all likelihood involve the United States in a major war that was avoidable with devastating consequences for all parties involved.

So, if Joe Biden wants to talk about his achievements in the run-up to elections, why doesn’t he explain his reasons for enabling and expanding the war with Russia over Ukraine? That war has not only brought about a flow of billions of dollars in aid for the most corrupt country in Europe, it has also resulted in a worldwide energy crisis that has fueled inflation and disrupted trade. More to the point, it has led to a global movement to confront the United States over its presumption that it is the hegemonistic power that sets the rules for everyone else. That is also contributing to increasing rejection of the US dollar as the world’s reserve currency, which will have an incalculable impact on the American economy and the country’s standard of living.

Has it all been worth it, Joe, to craft a narrative that ignores the real issues just so you can stay in power? The America that you and I were brought up in is sliding down into a deep dark hole, and you and your delusional neocon and neoliberal friends have been largely responsible for the descent even as you use your bully pulpit to cry about “democracy” at every opportunity.

The West Against Democracy

Minority Rule: The US Is Not a Democracy, w/ Prof. Aziz Rana

Why Biden’s ‘democracy summit’ got it all wrong