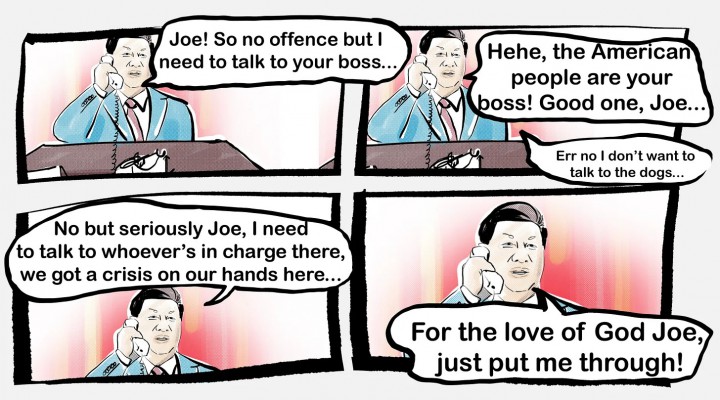 During the furor over Nancy Pelosi’s incendiary Taiwan visit last week, I was watching an appearance by Antiwar’s Dave DeCamp on the show Rising which brought up the under-discussed point that US officials going to Taipei is actually a continuation of a trend that had already been happening under the Trump administration.

“That started happening regularly after August 2020 when President Trump sent Alex Azar to Taiwan,” DeCamp said. “He was his health secretary. He was the highest-level cabinet official to visit Taiwan since 1979. The following month, in September 2020, they sent Keith Krach. He was the undersecretary for economics in the State Department, and he was the highest-level State Department official to visit Taiwan since 1979. So these are unprecedented steps, and since then we’ve seen more Chinese military activity in the region.”

Later in the interview Rising’s Briahna Joy Gray asked DeCamp if these escalations against China from the Trump administration into the Biden administration were a “kind of blob foreign policy decision that is not partisan.” DeCamp explained how in 2018 the US military began officially transitioning from emphasis on “counter-terrorism” in the Middle East toward “great power competition” with China and Russia, with the ultimate target being China.

“If you look at all the really hawkish think tanks in Washington that are funded by the arms industry, it’s all about this so-called great power competition,” DeCamp said. “Russia right now seems to be the more imminent issue I guess, but China seems to be in the long run. And we’ve seen this from just about every government agency — the Pentagon, the FBI, the State Department, the CIA — say that China is the long-term so-called threat. And we’ve seen Biden say this, and this is kind of the name of the game in Washington right now.”

In the lead-up to Pelosi’s visit, Moon of Alabama spotlighted this strange phenomenon where US foreign policy moves along the same trajectory regardless of political party or election results with a collection of recent articles that have all raised this subject independently. This one from Naked Capitalism stands out the most right now:

National leaders never have complete freedom to act; even autocrats have constituencies or power blocs they have to appease. In the US, it has become clear that the President has limited degrees of freedom on foreign policy matters; the military/intel interests call the shots. Mind you, there are factions so a President can push the needle to a degree; that’s why, for instance, Obama was able to check Clinton’s plans to escalate in Syria. But the flip side is that Presidents who want to improve relations with pet enemies get nowhere. In the Oliver Stone interviews, Putin recounts how he had productive discussions with Bush and they agreed on concrete de-escalation measures. Follow ups were unanswered. Eventually Putin got a written bafflespeak climbdown. That and other examples led Putin to conclude that US presidents are hostage to bureaucratic and commercial interests.

Biden is a visibly very weak president. And it appears that that has enabled the neocons to have an even bigger say over foreign policy than usual.

One assumes Xi has to understand that. Yet the Chinese readout has Xi starting from lofty first principles to contend that the US and China, as leading world powers, have a duty to promote peace, global development, and prosperity. From that, Xi reasons that seeing China as a strategic rival is “misperceiving” US-China relations and misleading the world community.

Who is Xi talking to when he goes on like that? It certainly is not to Biden.

New on MoA:
What Presidents Say Does Not Matter. It Is The Execution Of Policies That Counts.
https://t.co/QJv9LlBuwi pic.twitter.com/rClly4Uvsv

An example of the aforementioned comments by Putin was when Oliver Stone asked him, “You’ve gone through four U.S. presidents: Clinton, Bush, Obama and now Trump. What changes?”

“Almost nothing. Your bureaucracy is very strong and it is that bureaucracy that rules the world,” Putin replied.

It’s that “bureaucracy” that is responsible for the fact that the US-centralized empire continues to move in the same way along the same trajectory regardless of political parties and election results.

Nobody elects that bureaucracy. You can’t even see most of it behind the veils of government and corporate secrecy. You can study it your whole life and at best you’ll come away with a list of opaque government agencies, longtime military and intelligence operatives, plutocrats, corporations, banks, war profiteers, think tanks, lobbying firms and NGOs with ties to different nations and governments around the world, but exactly who is responsible for what specific decisions behind each specific move of the empire will remain shrouded in mystery to you. It’s just a jumble of names and words with no useful application.

Westerners are fond of crowing about the freedom they have to criticize their president or prime minister in whatever way they want, saying that if you tried to criticize the leadership of one of the foreign regimes we are all trained to hate you would be thrown in jail for it.

And depending on the nation that may be true, but is it really “freedom” to be able to criticize an elected official who is nothing more than a figurehead? Sure, you can criticize the president all you want. You can stick googly eyes on a sock and criticize that all you want, too; it will make the same amount of difference. At least people who live under more overtly authoritarian governments know who rules over them and who’s calling the shots. In that sense, they have more freedom than us.

As an Australian I know live in a member state of the US-centralized empire which is functionally just a US military base with kangaroos, but I can’t see who’s making the actual decisions about how the empire will act, how capitalism will move, and whether my children will be conscripted into the military to fight some idiotic war with China provoked over Taiwan or the Solomon Islands. If I were Chinese I would know exactly who is ultimately responsible for making the important decisions about economics and foreign policy in my country, but as an Australian I don’t get to know those things.

The truth is westerners live in a giant empire loosely centralized around the United States whose operations they have literally no influence over, whose operators they’re not even allowed to know, and whose mechanisms are entirely hidden. If you call that freedom, I call you a fool.

We can see that the empire moves the same way on important matters regardless of who we elect by simple naked-eye observation of the empire’s behaviors from year to year. We can also see it in the fact that the official leader of the most powerful government on earth is obviously suffering from some kind of dementia and is clearly not the one calling the shots.

All this makes me wonder: at what point will foreign leaders begin demanding to speak to those who are calling the shots? At what point do Vladimir Putin and Xi Jinping begin saying, “No, we’re not doing another fake phone call with America’s fake government. Put me in touch with the actual people who are responsible for the issues I am concerned about. Who is making the actual decisions on these specific matters? Let me talk to them. I demand to speak to your real government.”

China’s Taiwan Military Option – How and Why?

US-China tensions: Who is the real threat?

The Truth About Taiwan ft. Carl Zha and Xiangyu

0 thoughts on “When Will Foreign Leaders Start Asking To Speak To America’s REAL Government?”