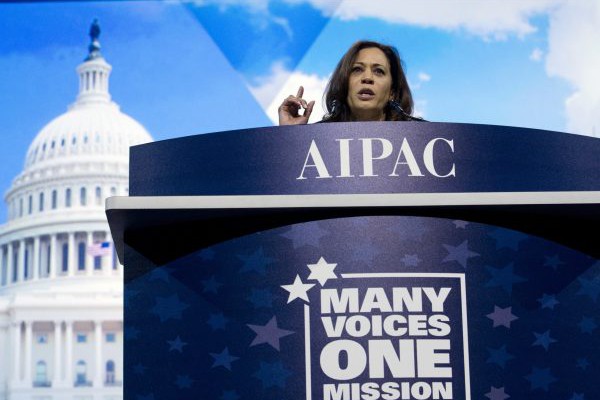 Those of us who have longed for an end to America’s military engagement in the Middle East have hoped for a candidate who was not tied hand and foot to Israel, which is the root cause of the badly-broken and essentially pointless U.S. foreign policy in the region. But the real tragedy is that in spite of Israel’s near-constant interference in government process at all levels in the United States, no candidate will mention it except in the most laudatory fashion. It will be praised as America’s best friend and closest ally, but the price the U.S. has paid for all that balderdash while it has simultaneously been turning itself into the slave of the Jewish state will never surface.

The Democratic Party leadership is owned by Israel through its big Jewish donors whose billions come with only one string attached, i.e. that the Jewish state must be protected, empowered and enriched no matter what damage it does to actual U.S. interests. Number one Israeli-American billionaire donor Haim Saban has said that he has only one interest, and that is Israel. How such a man can have major influence over American foreign policy and the internal workings of one of its two major parties might be considered the death of real democracy. At the Israel America Council’s National Conference Nancy Pelosi explicitly put Israel’s interests before America’s: “I have said to people when they ask me if this Capitol crumbled to the ground, the one thing that would remain is our commitment to our aid…and I don’t even call it aid…our cooperation with Israel. That’s fundamental to who we are.”

Jews are not surprisingly considerably over-represented in the Democratic Party Establishment. The influence of powerful Jewish Democrats recently insured that there would be no criticism of Israel, nor mention of Palestine, in the party platform for November’s election. So extreme is the virulence of some Jews against the Palestinians that a liberal Zionist Rabbi Mark Winer speaking at a Joe Biden rally in Florida recently denounced “progressives” as infected with the “anti-Semitism virus” over their support for Palestinian rights and the Boycott, Divestment and Sanctions (BDS) movement. No one even sought to challenge him. Another progressive Zionist Rabbi Jill Jacobs tweeted about how liberals have to embrace Israel to avoid offending Jews. She wrote: While Israel is likely the most divisive issue in the progressive world, setting a litmus test that one cannot consider oneself pro-Israel, or support two states, would divide the vast majority of Jews from the left. Not what we need when fighting white nationalism.

So-called white nationalists therefore appear to be the preferred enemies of progressive Jews, requiring one to close ranks even – or perhaps especially – when Palestinians are being brutalized. Joe Biden does not venture into that extreme-think zone, but he has made his loyalties clear. He has said that “You don’t have to be Jewish to be a Zionist. I am a Zionist.” More recently he has denounced Trump as “bad for Israel.” And to demonstrate his bona fides, he kicked Democratic Party Palestinian-activist Linda Sarsour under the bus when she appeared on a DNC convention panel discussing how to appeal to Muslim voters. Biden’s campaign office issued a statement saying that he “…has been a strong supporter of Israel and a vehement opponent of anti-Semitism his entire life, and he obviously condemns her views and opposes BDS, as does the Democratic platform. She has no role in the Biden campaign whatsoever.”

With that lead in, it is difficult to imagine how Biden would suddenly recognize the humanity of the long-suffering Palestinians, to include those who are, like he claims to be, Catholic. Biden is close to AIPAC and has spoken at their annual convention a number of times. He is opposed to putting any pressure on the Jewish state at any time and for any reason, which presumably includes not even protecting U.S. interests or the lives and property of American citizens.

Biden also worked for President Barack Obama and was a colleague in office of Hillary Clinton. Both did the usual pander to Israel and neither was particularly well disposed to the Palestinians, though Obama talked the talk of a man of peace so effectively that he was awarded a Nobel Prize. Bear in mind that Obama personally disliked Israeli Prime Minister Benjamin Netanyahu, but he increased the money from the U.S. Treasury going directly to Israel to $3.8 billion per annum and guaranteed it for ten years, an unprecedented move. The fact is that money was and is illegal under American law due to the 1976 Symington Amendment, which banned any aid to any country with a nuclear program that was not declared and subject to inspection under the terms of the Nuclear Non-Proliferation Treaty. Obama, who claims to be a “constitutional lawyer,” surely was aware of that but rewarded Israel anyway.

One can expect nothing from Kamala Harris. Her husband is Jewish and she has made her career in California by sleeping with power brokers and pandering to Israel. She, like Biden, has been a fixture at the AIPAC annual conference. She has already made her mark with the party’s pro-Israel crowd by having a conference call with 1800 Jewish Democratic donors, during which she repeatedly assured them a Biden-Harris Administration will never resort to cutting current levels of aid over any “political decisions that Israel makes,” adding personally “…and I couldn’t agree more.” She promised to demonstrate what she described as “unwavering support” for Israel. She also reminded the donors that Joe Biden had been behind the “largest military aid package” to any country ever when President Obama signed off on the $38 billion package in 2016.

Optimists point to the fact that the Democrats have now elected a number of congressmen who are willing to criticize Israel and they also cite opinion polls that suggest that a majority of registered Democrats want fair treatment for the Palestinians without any major bias in favor of the Jewish state. In spite of a news blackout on stories critical of Israel, there is broad understanding of the fact that the Israelis are serial human rights abusers. But those observations matter little in a situation in which the top of the party, to include those who manage elections and allocate money to promising prospective candidates, identify as strongly and often passionately friends of Israel. That is not an accident and one can assume that major effort has gone into maintaining that level of control.

How exactly this fissure in the Democratic Party will play out after November is anyone’s guess and, of course, if Trump wins there will be an autopsy to find out who to blame. Israel certainly won’t be looked at because no one is allowed to talk about it anyway, but some progressives at least will demand a review of a foreign policy platform that was heavy on intervention and global democracy promotion and light on getting along with adversaries, making it largely indistinguishable from that of the Republicans.

Israel for its part has played its cards carefully. It knows that either Biden or Trump will do whatever it wants, but it has deferred its planned annexation of much of the Palestinian West Bank, which will now take place after the election. It did that knowing that otherwise some liberals in the Democratic Party might try to turn Israel into an issue and split the Jewish community while also alienating Jewish donors and some Jewish voters if the annexation had taken place. After November 3rd, no matter who wins Israel will benefit and will have a free hand to do anything it wishes to the Palestinians. Or perhaps one should say the “remaining Palestinians” until they are all gone.