HOME / WORLD / Coming Soon from Joe and Kamala: Hooray for the Revolution!

Coming Soon from Joe and Kamala: Hooray for the Revolution! 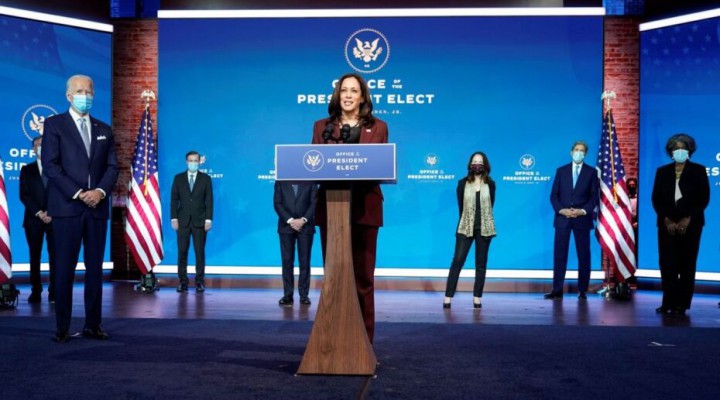 There is something scary about the way Democrats have wrapped their attempts to control the American people in platitudes and self-righteous drivel.

There is something quite scary about the way leading Democrats have persistently wrapped their attempts to control the American people in platitudes and self-righteous drivel. Joe Biden and Kamala Harris, who are currently pulling their team together, are no different than the Clintons and Obamas who preceded them and are already on course to establish conformity by diminishing the fundamental rights that have been hitherto enjoyed by the American people.

The current war being waged against the United States and its constitution hinges on the expressed desire to extirpate “white supremacy” aka “white privilege” aka “systemic racism.” It is a convenient campaign slogan as it immediately creates guilt and apprehension in those white people who are foolish enough to believe it. It also is a vague enough term that it becomes possible to wrap a lot of other issues into it, like gun control, destruction of traditional education, reparations and affirmative action, and even de-policing urban areas. As minorities allegedly suffer disproportionately from coronavirus it might even be expanded to include mandatory national lockdowns every time a pandemic appears, as Biden has suggested in the past.

We are already seeing how some crimes are no longer crimes if they are committed by sanctimonious social justice warriors. Prosecutors in a number of states are dismissing charges against rioters because they have “concluded the protesters were exercising their basic civil rights.” It is generally being claimed that prosecutions continue for the “real” crimes of arson, looting and destruction of public property, but at least one liberal California District Attorney will not charge anyone who maintains that he or she was doing what they did to combat racism or feed their families. She calls it considering the “needs” of the looters. The looted shops that will as a result go out of business and whose employees become unemployed evidently have no “needs.”

The Democrats have long been adept at playing identity politics. They believe that appealing to a number of groups with grievances to create a voting majority is good for the country, which it is not, because sooner or later the ticket has to be paid for and deals that abridge the freedom of most Americans must be consummated. That will certainly take place with Biden and Harris.

And Biden and Harris will likely get away with much of their divisive domestic agenda, if only because it will be carefully hidden behind fear of the Coronavirus and of more civil unrest, but the one area where they will meet real resistance is the Second Amendment. One critic describes how “There is much overlap between Biden’s platform and Harris’s previous presidential campaign proposals. They both emphasize holding gun manufacturers accountable, enacting universal background checks, banning the manufacture and sale of semiautomatic rifles and higher-capacity magazines capable of holding more than 10 rounds, [and] prohibiting those convicted of domestic violence from buying guns…” And that is only for starters, with national gun registration and some confiscation certainly being considered.

Many Republicans as well as Democrats own guns and will resist any attempt at registration, much less the seizure of certain types of firearms. The death by shooting numbers have indeed risen dramatically, particularly in urban areas, but the victims and perpetrators are largely black-on-black and the weapons used are obtained illegally. Ironically, the rise in crime is in large part attributable to Democratic Party pandering to movements like Black Lives Matter with their message that violence is acceptable to bring about change. To argue that somehow controlling the legal owners of weapons is a “safety measure” is a convenient fiction.

To help the Democratic Party agenda along there will also of necessity be restrictions on free speech. One can expect greater political control over the propagandistic state media like Voice of America and it is perhaps inevitable that already censorship-heavy social media and news sites will also be regulated for content. Biden has appointed as one of his transition team for “regulating” news reporting one Richard Stengel who has argued that there is a flaw in the First Amendment of the Constitution’s Bill of Rights. He believes that free speech cannot be allowed in some cases and that anything that constitutes a “hate speech” should be criminalized. Stengel explains somewhat confusingly “I’m all for protecting thought that we hate, but not speech that incites hate.” This is, of course, yet another Democratic Party gimmick to secure the support of groups with grievances but it will impact on every American who believes that free speech is a fundamental right.

Yet another brilliant appointment by Biden is Ezekiel Emanual, bioethicist brother of former Obama Chief of Staff Rahm Emanuel. Ezekiel is on the Biden administration’s COVID transition team. He has a lot of interesting things to say, notably that the United States should give any newly developed and in short supply COVID vaccines to countries with younger populations so that the young could live while older Americans die. He has also said that everyone should die by age 75.

Finally, Joe’s ambitions do not end on the nation’s borders. In addition to pulling together a cabinet that will include a host of warmongers, there is talk that the new president will early in his presidency convene a “Summit of Democracies” with the stated intention of coordinating a response to Chinese, Iranian and, of course, Russian “aggression.” If it sounds like old wine in new bottles, it should.

Enthusiastic reporting from military contractor funded online newsletter DefenseOne supports the Biden initiative but with a warning: “And if this is truly a Democracy Summit, then Biden should make it clear that government leaders of China, Russia, Iran, Syria, North Korea and their ilk are not invited.” The process of selecting democracies will in fact be more complicated than this with politically protected states like Israel being included even though it is a serial human rights abuser and war criminal. The United States is itself a flawed democracy that is widely seen in negative terms by most of the world, but that will not stop it from attempting to host the summit.

So we Americans and presumably much of the world have a lot to look forward to in the new Biden-Harris regime that is currently taking shape. Internal democracy for all will increasingly be imperiled by pandering to special interests and more foreign wars. It is particularly interesting to note that the one thing that Democratic Party voters as well as other Americans overwhelmingly wanted above all else was a national health care system. That subject is not even on the Biden to-do list.

Coming Soon From Joe and Kamala: Hooray for the Revolution!

0 thoughts on “Coming Soon from Joe and Kamala: Hooray for the Revolution!”