HOME / Politics / So what if the Ottomans shaped the modern world? 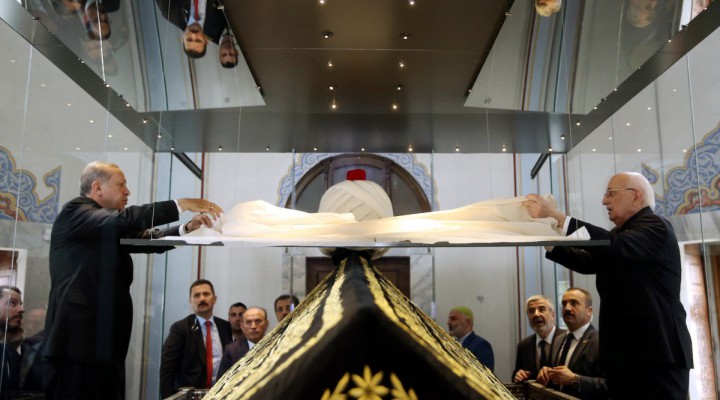 Erdogan is mesmerized by Caliph Selim but, unlike Machiavelli, he doesn’t fear him; he wants to emulate him

Once upon a time in Anatolia, in the late 13th century a Turkic principality – one of many shaped in the wake of the Mongol invasion of the 1240s – consigned the Seljuk Turks to the past and emerged as the Ottoman emirate. It was named after its founder, Osman I.

By the middle of the 15th century, the time of the game-changing conquest of Constantinople by Sultan Mehmet II, the expanding Ottoman empire had absorbed virtually all its neighboring Turkic emirates.

And by the start of the 16th century, what sprang up was a multi-religious and multi-ethnic empire that – pragmatic and tolerant – ruled for four centuries over the Balkans, Anatolia and Southwest Asia.

Talk about a major historical riddle: How did a small principality in the western fringe of what used to be known as Asia Minor turn into what could arguably be defined as Islam’s most important empire? The key to unlocking the riddle may be offered by Sultan Selim I.

God’s Shadow, which in its original English edition (Faber & Faber) is subtitled The Ottoman Sultan Who Shaped the Modern World, may reveal that author Alan Mikhail, chair of the Department of History at Yale, is uniquely qualified to argue the case.

Mehmet II, who with his endless obsession and cunning extinguished the Byzantine empire on the fateful May 29, 1453, when he was only 21, was a larger-than-life figure for peoples of the Mediterranean, the Balkans and Asia Minor.

He bridged Europe and Asia. He refashioned Constantinople, renamed Istanbul, into the capital of the sprawling empire. He lorded over the silk roads from the Black Sea to the Mediterranean. The Fatih (“Conqueror”) assumed mythical proportions east and west – and even branded himself Caesar, heir to Byzantine emperors.

Mehmet II conquered the Balkans in the 1460s, finished off with Genoese trading colonies in Crimea and imposed vassalage over the Crimean Tatar Khanate in 1478. That meant, in practice, turning the Black Sea into a virtual Ottoman lake.

Author Mikhail stresses right at the start that the Ottoman Empire was the most powerful state on earth – more powerful than the Ming dynasty, not to mention the Safavids – for quite some time. It was the largest empire in the Mediterranean since ancient Rome and “the most enduring” in the history of Islam.

Then he sets the crux of the – explosive – thesis he will develop in detail: “It was the Ottoman monopoly of trade routes with the East, combined with their military prowess on land and on sea, that pushed Spain and Portugal out of the Mediterranean, forcing merchants and sailors from these 15th-century kingdoms to become global explorers as they risked treacherous voyages across oceans and around continents – all to avoid the Ottomans.”

This thesis will be extremely unpalatable to a hegemonic (at least for the past 150 years) West, now confronted with its turbulent decline. Mikhail does his best to show how, “from China to Mexico, the Ottoman empire shaped the known world at the turn of the 16th century.”

Obviously ideological, military and economic competition with the Spanish and Italian states – and then Russia, China and other Islamic states – was no holds barred. Still, Mikhail relishes showing how Columbus, Vasco da Gama, Montezuma, Luther, Tamerlan – one and all “calibrated their actions and defined their very existence in reaction to the reach and grasp of Ottoman power.”

It takes a lot of balls for a historian employed by an elite American university to offer a self-described “revolutionary” narrative on the role of Islam and the Ottomans in shaping not only the Old World, but also the New World. Mikhail is fully aware of how this will come as “a bitter pill for many in the West.”

Exit Muslims as the “terrorist.” Exit “the rise of the West.” Enter the Ottomans as a civilizing power. Mikhail is adamant: The practice “since the Industrial Revolution and the so-called glories of the 19th century” of stretching European primacy back to Columbus “is a historical absurdity.” The Ottoman empire “struck fear into the world for centuries before it earned its derogatory 19th-century sobriquet, ‘the sick man of Europe.’”

The fact is that, for all its setbacks, the Ottoman Empire – in over 600 years of history – remained the hegemon in the Middle East and one of the most important states in Europe, Africa and Asia until World War I. From 1453 up to the 19th century, the Ottomans remained “at the center of global politics, economics and war.”

Just imagine. Ottoman armies ruled over vast swaths of Europe, Africa and Asia; the most crucial Silk and non-Silk trade corridors; key city hubs along the Mediterranean, the Red Sea, the Black Sea, the Caspian Sea, the Persian Gulf and the Indian Ocean. They ruled over Damascus, Istanbul, Cairo, Jerusalem, Mecca and Medina. That’s a long way from their humble beginnings as sheepherders in desolate trails across Central Asia.

And then there’s the ultimate badass: Sultan Selim.

Mikhail spends a great deal of his narrative carefully setting the stage for the eruption of the quintessentially Machiavellian Selim, even before he became Sultan in 1512. Still in Trabzon, in the Black Sea, as provincial governor, consolidating the imperial forces in the East, by 1492 Selim was fully aware how the alliance between Istanbul and Cairo conditioned European trade in what US neo-cons not long ago called the “Greater Middle East.”

The Ottomans and the Mamluks – whom Selim would later destroy as Sultan – controlled all access to the East from the Mediterranean. This geoeconomic fact by itself destroys the fable of European ascendancy during the Renaissance and the much-lauded “Age of Exploration”; it was all about Ottoman control of trade and commerce.

If anyone in Europe wanted to trade with China and India, they would have to adjust to the Ottoman’s “my way or the highway.” The Venetians tried, and it didn’t work. Genoese Columbus went full highway. Mikhail relishes nothing more than showing how the voyages of Columbus, in so many ways, “were a response to the power of the Ottomans.” They were “the political force that shaped Columbus and his generation more than any other.”

Things get positively heavy metal when Columbus is depicted as a Christian jihadi, as “he used the notion of a global civilizational war between Christendom and Islam to push his case for the Atlantic voyage.” Queen Isabella ended up buying it.

And then it all went downhill, in a literally bloody way, as “the vocabulary of war with Islam became the language of the Spanish conquest in the Americas.” The West conveniently forgets that all indigenous peoples were required (Mikhail’s own italics) to acknowledge that the Catholic Church was the universal power and that their own belief systems were absolutely inferior.

From Selim to Erdogan

Machiavelli was a huge fan of the Ottomans, whom he admired and feared. He was particularly impressed by Selim’s strategic acumen, always prevailing over nearly impossible odds. Machiavelli finished The Prince in the exact same year – 1513 – when Selim eliminated his half-brothers to finally secure the Sultanate, which he had conquered in 1512.

Selim started with a bang – with no less than an economic blockade against the Safavids, outlawing the export of Persian silk from the Ottoman empire. (That trade had been how the Iranians reached the Eastern Mediterranean and the lucrative European markets.)

Selim’s victory over the Safavids in the Battle of Chaldiran was intertwined with something immensely eventful; the Portuguese capture of ultra-strategic Hormuz in 1515. That was the first European possession in the Persian Gulf. And what a prize: The Portuguese would now have control over shipping to and from the Persian Gulf, as well as a key hub linking to their new colonies on India’s west coast.

After the battle between Christians and Muslims crossed the Atlantic, the stage was set for the next chapter: Ottomans and Portuguese fighting for global power in the Indian Ocean.

Selim was on a roll. First he took Syria – incorporating legendary Damascus and Aleppo. Then he smashed the Mamluks – and that meant not only Cairo but also Jerusalem, Mecca, Medina and even Yemen, with its strategic access to the Indian Ocean and infinite possibilities for Ottoman commerce, starting with a monopoly on the silk trade.

The Selim Sultanate lasted only 8 years, from 1512 to 1520 – with geopolitical tectonic plates moving non-stop. Luther plunged Christianity into a religious civil war. The Ottomans controlled more territory around the Mediterranean than any other power. The European imperial drive hit the Indian Ocean. And then there was the ultimate theological challenge presented by the ultimate Other: Native Americans, north and south. They could not possibly be part of “God’s creation.”

When he died in 1520, Selim – sultan and also caliph – thought that being the ruler of the world’s largest empire was a given. He was, indeed, “God’s shadow on Earth.”

By the end of the last chapter in the book, “American Selim,” Mikhail again tackles the most burning question: why (his italics) Columbus had to cross the Atlantic. In a nutshell: “Hoping for an alliance with the Grand Khan of the East, he aimed to retake Jerusalem and destroy Islam; more prosaically, his voyages promised an end-run around the trade monopolies of the Ottomans and the Mamluks.”

After Columbus arrived in the Americas, Europeans inevitably filtered their experiences “through the lens of their wars with Muslims” and engaged “in a new version of their very old Crusades, a new kind of Catholic jihad.” Nevertheless, “Islam would continue to forge the histories of both Europe and the New World and the relationship between the two.”

After so much drama, Mikhail and the book’s editors still manage to present an outstanding image in the next before the last page: Turkish President Recep Tayyip Erdogan ceremoniously staring at Selim’s tomb in Istanbul in 2017, after winning a constitutional referendum that expanded his powers enormously.

Like Machiavelli, Erdogan is mesmerized by Selim. But, unlike Machiavelli, he does not fear him; he wants to emulate him. What – weaponized – imperial dreams still lurk in the mind of the neo-Ottoman sultan?

0 thoughts on “So what if the Ottomans shaped the modern world?”