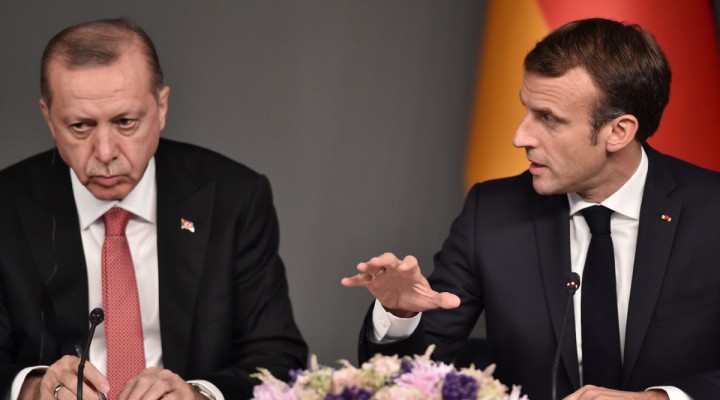 Turkish President Recep Tayyip Erdogan ratcheted up his war of words with France’s Emmanuel Macron on Friday when he declared to journalists after Friday prayers at the Hagia Sophia mosque that he wished France would “get rid” of its head of state as soon as possible, and that if it didn’t the ‘Yellow Vests’ protest movement would resume and get out of control.

His anger was understandable. The two men are engaged in a no-holds-barred duel over a host of issues including Libya, Syria, the Eastern Mediterranean and the war between Armenia and Azerbaijan, which Turkish military intervention settled in the latter’s favour.

Macron was quick to admonish his Turkish counterpart, demanding he show respect and accusing him of curbing his people’s freedoms.

This latest exchange of vitriolic personal attacks comes at a difficult time for both leaders, but considerably more so for Erdogan. The Turkish president is waging several wars simultaneously on both the domestic and external fronts.

At home, opposition parties are joining forces against him amid a public outcry over his sale of 10% of the Istanbul stock exchange’s shares to Qatar in a controversial attempt to ease the currency crisis that has depleted the country’s reserves, slashed the value of the lira and fueled inflation.

Abroad, Macron is leading a ferocious campaign against the Turkish president in the European Union, demanding economic sanctions on Turkey because of its gas exploration in waters disputed with EU members Greece and Cyprus, and sending French warships and planes to the area to support Greece’s claim.

Erdogan can certainly gain politically by attacking Macron given the latter’s unpopularity in the Muslim world since he appeared to support the publication of cartoons insulting the Prophet Muhammad. But any such gain is minor in comparison to the damage Turkey could sustain from EU sanctions, escalated military pressure on its proteges in Libya and Syria, and the advent of a new US president who is no fan of Erdogan and supports the Kurds.

The Turkish president is set to have a hard time in the coming weeks and months on several fronts — notably Libya, Armenia and the Eastern Mediterranean — as Macron rolls up his sleeves to rally EU leaders behind his campaign for punitive economic measures and a halt to European investment in Turkey.

The few Middle Eastern governments friendly to Erdogan have been advising him to reconsider some of his regional policies in order to reduce his long list of enemies. But according to a senior Islamist figure who recently visited him, he refuses to heed such suggestions and is convinced that by staying his course he will eventually emerge victorious, as he did in Azerbaijan.

Erdogan’s problem, according to this same source, is that he sticks stubbornly to his viewpoint and won’t listen to advice, including attempts to reconcile him with former political allies Ahmet Davutoglu and Ali Babacan to shore up his domestic position.

If the Turkish president maintains that attitude, he will face growing problems at home and a succession of setbacks abroad: in Libya, Syria and maybe in the Gulf region too if US efforts to broker a deal between Qatar and its detractors succeed.

0 thoughts on “The Erdogan-Macron feud”