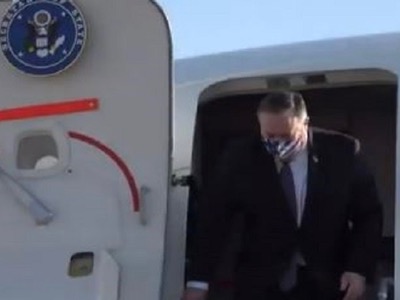 Regardless of the anti-Chinese hysteria of the group that imposed Western health policy responses to the Covid-19 epidemic, it demonstrated Western dependence on Chinese manufactured products. This led the Trump administration to move from a desire to rebalance trade to a military confrontation, without however resorting to war. The sabotage of the Silk Roads has officially begun.

One of the consequences of the Coronavirus epidemic is that Westerners have realised their dependence on Chinese manufacturing capacity. Neither the Europeans nor the Americans were able to manufacture the millions of surgical masks they urgently wanted to distribute to their population. They had to buy them in China and often fought among themselves on the tarmacs to take them home at the expense of their allies.

In this context of general save-and-go, US leadership over the West no longer made sense. This is why Washington decided not to rebalance trade relations with China, but to oppose the construction of the silk roads and to help the Europeans relocate part of their industry. This could be a decisive turning point: a partial halt to the process of globalization that had begun, with the disappearance of the Soviet Union. Beware: this is not an economic decision to call into question the principles of free trade, but a geopolitical strategy to sabotage Chinese ambitions.

This change of strategy had been announced by the campaign not only economic, but also political and military against Huawei. The United States and NATO feared that if Huawei won the Western government contracts to install the G5, the Chinese army would be able to intercept its signals. More importantly, they knew that if the Chinese took these contracts, they would technically be the only ones who could take the next step [1].

This is not a rallying of the Trump administration to the Red Dawn fantasies [2], whose anti-Chinese obsession is based on primary anti-communism, but an awareness of Beijing’s gigantic military progress. Admittedly, the budget of the People’s Liberation Army is derisory compared to that of the US Armed Forces, but precisely its very thrifty strategy and its technical progress allow it today to challenge the US monster.

At the end of the First World War, the Chinese of the Kuomintang and the Communist Party together set out to reunify their country and avenge a long century of colonial humiliation. A Kuomintang personality, Chiang Kai-shek, tried to eliminate the Communist Party but was defeated by it and went into exile in Taiwan. Mao Zedong pursued this nationalist dream while guiding the Communist Party in the social transformation of the country. However, his aim was always nationalist, as the Sino-Russian war on Zhenbao Island in 1969 showed. In the 1980s, Admiral Liu Huaqing (the man who put down the coup attempt by Zhao Ziyang in Tiananmen Square) devised a strategy to push the US armies out of the Chinese cultural zone. This strategy has been patiently implemented for forty years. Without ever provoking a war, Beijing is extending its territorial sovereignty in the China Sea and harassing the US Navy. The time is not far off when the US Navy will have to withdraw, leaving China to take Taiwan by force.

After the dissolution of the USSR, President George Bush Sr. considered that the US had no rivals left and that it was time to make money. He demobilized a million soldiers and opened the way for financial globalization. US multinationals relocated their companies to China where their products were manufactured by countless untrained workers, paid twenty times less than US workers. Gradually, almost all the goods consumed in the US were imported from China. The U.S. middle class became poorer, while China trained its workers and became richer. From the principle of free trade, the movement spread throughout the West and then to the whole world. The Communist Party decided to re-establish a modern equivalent to the ancient Silk Road and, in 2013, elected Xi Jinping to carry out this project. When it is realized, if it is realized, China could have a virtual monopoly of manufacturing goods in the world.

By deciding to sabotage the Silk Roads, President Donald Trump is trying to push China out of its own cultural zone just as it is pushing the United States out of its own. To do so, he will be able to count on his “allies” whose companies are already devastated by excellent Chinese products at low prices. Some of them have experienced revolts because of this, such as the Yellow Vests revolt in France. In the past, the ancient Silk Road brought unknown products to Europe, while today’s roads carry the same products as those made in Europe, but much cheaper.

Contrary to popular belief, China could give up the Silk Roads for geostrategic reasons, regardless of the amount of its investment. It has done so in the past. It had thought of opening a maritime silk route in the 15th century, sent Admiral Zheng He, “the eunuch with the three jewels”, at the head of a formidable armada, as far as Africa and the Middle East, before withdrawing and scuttling its gigantic fleet never to return.

Secretary of State Mike Pompeo traveled to Israel under lockdown. He tried to convince the two future prime ministers, Benjamin Netanyahu (Jewish colonialist) and his deputy, who were nevertheless opposed to General Benny Gantz (Israeli nationalist), to stop Chinese investments in their country [3] Chinese companies already control half of Israel’s agricultural sector and are expected to account for 90% of its trade in the coming months. Mike Pompeo should similarly try to convince the Egyptian president, Abdel Fattah el-Sissi. Indeed, the Suez Canal and the Israeli ports of Haifa and Ashdod were to be the terminals of the modern silk route in the Mediterranean.

After various attempts, China assessed the instability of Iraq, Syria and Turkey and gave up crossing them. A tacit agreement was reached between Washington and Moscow to leave a jihadist pocket anywhere on the Syrian-Turkish border to discourage Chinese investment in the area. Moscow intends to base its alliance with Beijing on silk routes crossing its own territory and not Western countries. This is the project of President Vladimir Putin’s ’Great Eurasian Partnership’ [4].

We come back tirelessly to the same dilemma (“Thucydides’ trap”): faced with the rise of a new power (China), the dominant power (the United States) must either wage war on it (like Sparta against Athens), or give space to the newcomer, that is, accept the division of the world.