HOME / Politics / Nixon-Trump vs. the Strategy of Tension 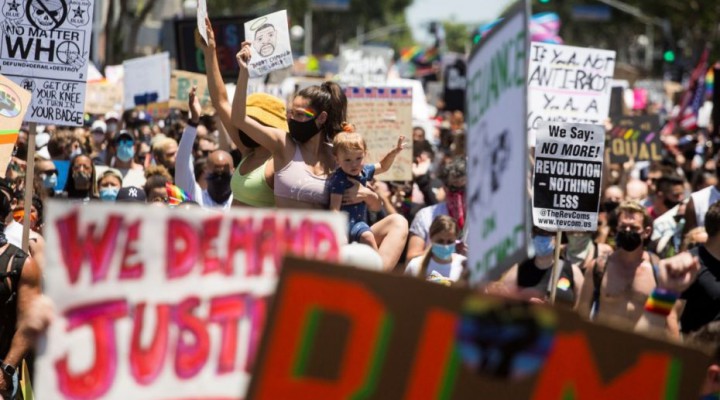 MAGA – which is a rehash of the American dream – simply cannot happen when society is viciously polarized; vast sectors of the middle class are being completely erased; and mass immigration is coming from the Global South.

Nixon 68 is back with a vengeance, with President Trump placing himself as the guarantor/enforcer of Law & Order.

That slogan guaranteed Nixon’s election, and was coined by Kevin Phillips, then an expert in “ethnic voting patterns”.

Philips makes for a very interesting case. In 1999, he became the author of a seminal book: The Cousins’ Wars: Religion, Politics, and the Triumph of Anglo-America, where he tracks how a “small Tudor kingdom” ended up establishing global hegemony.

Now, we may be at the threshold of a fourth war – with unpredictable and unforeseen consequences.

As it stands, what we have is a do-or-die clash of models: MAGA against an exclusivist Fed/Wall Street/Silicon Valley-controlled system.

MAGA – which is a rehash of the American dream – simply cannot happen when society is viciously polarized; vast sectors of the middle class are being completely erased; and mass immigration is coming from the Global South.

In contrast, the Fed as a Wall Street hedge fund meets Silicon Valley model, a supremely elitist 0.001% concoction, has ample margins to thrive.

The model is based on even more rigid corporate monopoly; the preeminence of capital markets, where a Wall Street boom is guaranteed by government debt-buybacks of its own debt; and life itself regulated by algorithms and Big Data.

This is the Brave New World dreamed by the techno-financial Masters of the Universe.

Trump’s MAGA woes have been compounded by a shoddy geopolitical move in tandem with Law and Order: his re-election campaign will be under the sign of “China, China, China.” When in trouble, blame a foreign enemy.

That comes from serially failed opportunist Steve Bannon and his Chinese billionaire sidekick Guo Wengui, or Miles Guo. Here they are in Statue of Liberty mode announcing their no holds barred infowar campaign to demonize the Chinese Communist Party (CCP) to Kingdom Come and “free the Chinese people”.

Bannon’s preferred talking point is that if his infowar fails, there will be “kinetic war”. That is nonsense. Beijing’s priorities are elsewhere. Only a few neo-conned Dr. Strangeloves would envisage “kinetic war”- as in a pre-emptive nuclear strike against Chinese territory.

Alastair Crooke has masterfully shown how the geoeconomic game, as Trump sees it, is above all to preserve the power of the U.S. dollar: “His particular concern would be to see a Europe that was umbilically linked to the financial and technological heavyweight that is China. This, in itself, effectively would presage a different world financial governance.”

But then there’s The Leopard syndrome: “If we want things to stay as they are, things will have to change”. Enter Covid-19 as a particle accelerator, used by the Masters of the Universe to tweak “things” a bit so they not only stay as they are but the Master grip on the world tightens.

The problem is Covid-19 behaves as a set of – uncontrollable – free electrons. That means nobody, even the Masters of the Universe, is able to really weigh the full consequences of a runaway, compounded financial/social crisis.

Russiagate, now totally debunked, has unfolded in effect as a running coup: a color non-revolution metastasizing into Ukrainegate and the impeachment fiasco. In this poorly scripted and evidence-free morality play with shades of Watergate, Trump was cast by the Democrats as Nixon.

Big mistake. Watergate had nothing to do with a Hollywood-celebrated couple of daring reporters. Watergate represented the industrial-military-security-media complex going after Nixon. Deep Throat and other sources came from inside the Deep State. And it was not by accident that they were steering the Washington Post – which, among other roles, plays the part of CIA mouthpiece to perfection.

Trump is a completely different matter. The Deep State keeps him under control. One just needs to look at the record: more funds for the Pentagon, $1 trillion in brand new nuclear weapons, perennial sanctions on Russia, non-stop threats to Russia’s western borders, (failed) efforts to derail Nord Stream 2. And this is only a partial list.

So, from a Deep State point of view, the geopolitical front – containment of Russia-China – is assured. Domestically, it’s much more complicated.

As much as Black Lives Matter does not threaten the system even remotely like the Black Panthers in the 60s, Trump believes his own Law & Order, like Nixon, will once again prevail. The key will be to attract the white women suburban vote. Republican pollsters are extremely optimistic and even talking about a “landslide”.

Yet the behavior of an extra crucial vector must be understood: what corporate America wants.

This who’s who would suggest a completely isolated Trump. But then we have to look at what really matters; the class war dynamics in what is in fact a caste system, as Laurence Brahm argues.

Black Lives Matter, the organization and its ramifications, is essentially being instrumentalized by selected corporate interests to accelerate their own priority: to crush the U.S. working classes into a state of perpetual anomie, as a new automated economy rises.

That may always happen under Trump. But it will be faster without Trump.

What’s fascinating is how this current strategy of tension scenario is being developed as a classic CIA/NED playbook color revolution.

An undisputed, genuine grievance – over police brutality and systemic racism – has been completely manipulated, showered with lavish funds, infiltrated, and even weaponized against “the regime”.

Just to control Trump is not enough for the Deep State – due to the maximum instability and unreliability of his Demented Narcissus persona. Thus, in yet another priceless historical irony, “Assad must go” metastasized into “Trump must go”.

The cadaver in the basement

One must never lose track of the fundamental objectives of those who firmly control that assembly of bought and paid for patsies in Capitol Hill: to always privilege Divide and Rule – on class, race, identity politics.

After all, the majority of the population is considered expendable. It helps that the instrumentalized are playing their part to perfection, totally legitimized by mainstream media. No one will hear lavishly funded Black Lives Matter addressing the real heart of the matter: the reset of the predatory Restored Neoliberalism project, barely purged of its veneer of Hybrid Neofascism. The blueprint is the Great Reset to be launched by the World Economic Forum in January 2021.

It will be fascinating to watch how Trump deals with this “Summer of Love” remake of Maidan transposed to the Seattle commune. The hint from Team Trump circles is that he will do nothing: a coalition of white supremacists and motorcycle gangs might take care of the “problem” on the Fourth of July.

None of this sweetens the fact that Trump is at the heart of a crossfire hurricane: his disastrous response to Covid-19; the upcoming, devastating effects of the New Great Depression; and his intimations pointing to what could turn into martial law.

Still, the legendary Hollywood maxim – “no one knows anything” – rules. Even running with a semi-cadaver in a basement, the Democrats may win in November just by doing nothing. Yet Teflon Trump should never be underestimated. The Deep State may even realize he’s more useful than they think.

Truth or Choice? the hegemonic-neoliberal destruction of knowledge

0 thoughts on “Nixon-Trump vs. the Strategy of Tension”