HOME / WORLD / Did China Just Announce the End of U.S. Primacy in the Pacific? 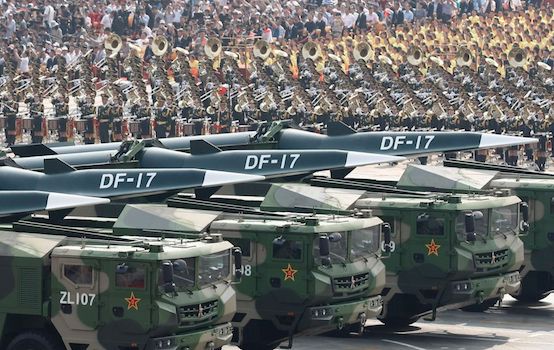 For decades, the United States has taken China’s ballistic missile capability for granted, assessing it as a low-capability force with limited regional impact and virtually no strategic value. But on October 1, during a massive military parade celebrating the 70th anniversary of the founding of the People’s Republic of China (PRC), Beijing put the U.S., and the world, on notice that this assessment was no longer valid.

In one fell swoop, China may have nullified America’s strategic nuclear deterrent, the U.S. Pacific Fleet, and U.S. missile defense capability. Through its impressive display of new weapons systems, China has underscored the reality that while the United States has spent the last two decades squandering trillions of dollars fighting insurgents in the Middle East, Beijing was singularly focused on overcoming American military superiority in the Pacific. If the capabilities of these new weapons are taken at face value, China will have succeeded on this front.

In the West, it is called RMA, short for “Revolution in Military Affairs.” The term was first coined by Marshal Nikolai Ogarkov in the early 1980s. Ogarkov, who was at the time serving as the chief of the Soviet general staff, spoke of “developments in nonnuclear means of destruction [which] promise to make it possible to sharply increase (by at least an order of magnitude) the destructive potential of conventional weapons, bringing them closer, so to speak, to weapons of mass destruction in terms of effectiveness.”

Ogarkov’s work caught the attention of Andrew Marshall, who headed the Pentagon’s Office of Net Assessment. Marshall took Ogarkov’s premise and put it into action, integrating new technology with innovative operational concepts that positioned the U.S. military to be able to prevail over a numerically superior Soviet army in a ground war in Europe. The capabilities of Marshall’s RMA were potently displayed during the Gulf War in 1991, when the U.S. led a coalition that handily defeated Saddam Hussein.

One of the nations keenly observing the impact of the American RMA in the Persian Gulf was China. Chinese military theorists studied how Marshall adapted Ogarkov’s theories into an American version of RMA, and responded with a Chinese adaptation, developing weapons specifically intended to overcome American superiority in critical areas.

These weapons became known as “shashoujian,” or “the Assassin’s Mac,” derived from the traditional Chinese way of describing a weapon of surprising power. “A shashoujian,” a contemporary Chinese military journal notes, “is a weapon that has an enormous terrifying effect on the enemy and that can produce an enormous destructive assault.” More importantly, the modern Chinese concept of shashoujian envisions not a single weapon, but rather a system of weapons that combine to produce the desired effect.

Defeating the United States in a ground war has never been an objective of the Chinese military—the Korean War was an historical anomaly. China’s focus instead has been to develop shashoujian weapons to safeguard its national security and territorial integrity. This couldn’t be accomplished simply by mimicking the American RMA example; they needed to create a uniquely Chinese military superiority that combined Western technology with Eastern wisdom. “This,” the Chinese believe, “is our trump card for winning a 21st century war.”

For China, the three principle points of potential military friction with the U.S. are Taiwan, South Korea-Japan, and the South China Sea. Apart from South Korea and Japan, where the U.S. has significant ground and air forces already forward deployed, the main threat to China is maritime power projected by American aircraft carrier battlegroups and amphibious assault ships. The Chinese response was to develop a range of anti-access/area-denial (A2/AD) capabilities designed to target American naval forces before they arrived in any potential contested waters.

Traditionally, the U.S. Navy has relied on a combination of surface warships armed with sophisticated air defense systems, submarines, and the aircraft carrier’s considerable contingent of combat aircraft to defend against hostile threats in time of war. China’s response came in the form of the DF-21D medium-range missile, dubbed the “carrier killer.” With a range of between 1,450 and 1,550 kilometers, the DF-21D employs a maneuverable warhead that can deliver a conventional high-explosive warhead with a circular error of probability (CEP) of 10 meters—more than enough to strike a carrier-sized target.

To compliment the DF-21D, China has also deployed the DF-26 intermediate-range missile, which it has dubbed the “Guam killer,” named after the American territory home to major U.S. military installations. Like the DF-21, the DF-26 has a conventionally armed variant, which is intended to be used against ships. Both missiles were featured in the 2015 military parade commemorating the founding of the PRC.

The U.S. responded to the DF-21/DF-26 threat by upgrading its anti-missile destroyers and cruisers, and forward deploying the advanced Terminal High Altitude Area Defense (THAAD) surface-to-air missile system to Guam. A second THAAD system was also deployed to South Korea. From America’s perspective, these upgrades offset the Chinese advances in ballistic missile technology, restoring the maritime power projection capability that has served as the backbone of the U.S. military posture in the Pacific.

As capable as they were, however, the DF-21D and DF-26 were not the shashoujian weapons envisioned by Chinese military planners, representing as they did reciprocal capability, as opposed to a game-changing technology. The unveiling of the true shashoujian was reserved for last week’s parade, and it came in the form of the DF-100 and DF-17 missiles.

The DF-100 is a vehicle-mounted supersonic cruise missile “characterized by a long range, high precision and quick responsiveness,” according to the Chinese press. When combined with the DF-21/DF-26 threat, the DF-100 is intended to overwhelm any existing U.S. missile defense capability, turning the Navy into a virtual sitting duck. As impressive as the DF-100 is, however, it was overshadowed by the DF-17, a long-range cruise missile equipped with a hypersonic glide warhead, which maneuvers at over seven times the speed of sound—faster than any of the missiles the U.S. possesses to intercept it. Nothing in the current U.S. arsenal can defeat the DF-17—not the upgraded anti-missile ships, THAAD, or even the Ground Based Interceptors (GBI) currently based in Alaska.

In short, in the event of a naval clash between China and the U.S., the likelihood of America’s fleet being sent to the bottom of the Pacific Ocean is very high.

The potential loss of the Pacific Fleet cannot be taken lightly: it could serve as a trigger for the release of nuclear weapons in response. The threat of an American nuclear attack has always been the ace in the hole for the U.S. regarding China, given that nation’s weak strategic nuclear capability.

Since the 1980s, China has possessed a small number of obsolete liquid-fuel intercontinental ballistic missiles as their strategic deterrent. These missiles have a slow response time and could easily be destroyed by any concerted pre-emptive attack. China sought to upgrade its ICBM force in the late 1990s with a new road-mobile solid fuel missile, the DF-31. Over the course of the next two decades, China has upgraded the DF-31, improving its accuracy and mobility while increasing the number of warheads it carries from one to three. But even with the improved DF-31, China remained at a distinct disadvantage with the U.S. when it came to overall strategic nuclear capability.

While the likelihood that a few DF-31 missiles could be launched and their warheads reach their targets in the U.S., the DF-31 was not a “nation killing” system. In short, any strategic nuclear exchange between China and the U.S. would end with America intact and China annihilated. As such, any escalation of military force by China that could have potentially ended in an all-out nuclear war was suicidal, in effect nullifying any advantage China had gained by deploying the DF-100 and DF-17 missiles.

Enter the DF-41, China’s ultimate shashoujian weapon. A three-stage, road-mobile ICBM equipped with between six and 10 multiple independently targetable reentry vehicle (MIRV) warheads, the DF-41 provides China with a nuclear deterrent capable of surviving an American nuclear first strike and delivering a nation-killing blow to the United States in retaliation. The DF-41 is a strategic game changer, allowing China to embrace the mutual assured destruction (MAD) nuclear deterrence posture previously the sole purview of the United States and Russia.

Most who watched the Chinese military parade on October 1 saw what looked to be some interesting missiles. For the informed observer, however, they were witnessing the end of an era. Previously, the United States could count on its strategic nuclear deterrence to serve as a restraint against any decisive Chinese reaction to aggressive American military maneuvers in the Pacific. Thanks to the DF-41, this capability no longer exists. Now the U.S. will be compelled to calculate how much risk it is willing to take when it comes to enforcing its sacrosanct “freedom of navigation.”

While the U.S. commitment to Taiwan’s independence remains steadfast, its willingness to go to war with China over the South China Sea may not be as firm. The bottom line is that China, with a defense budget of some $250 billion, has successfully combined “Western technology with Eastern wisdom,” for which the U.S. has no response.

0 thoughts on “Did China Just Announce the End of U.S. Primacy in the Pacific?”