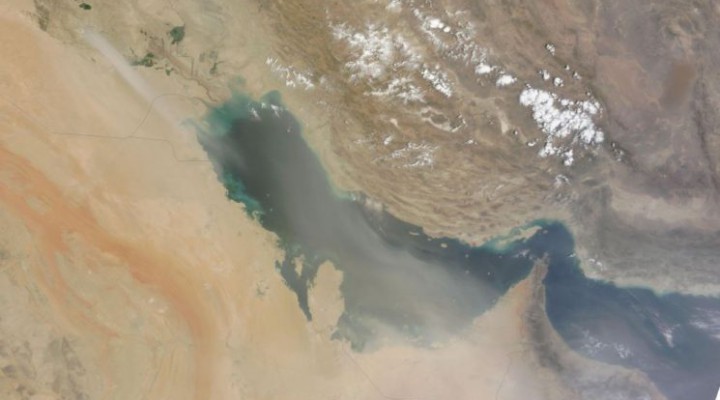 There is a strong current of change affecting the international political arena. It is the beginning of a revolution brought on by the transition from a unipolar to multipolar world order. In practice, we are faced with the combination of several factors, including the application of US tariffs on Chinese exports, Washington’s sanctions on Iran, US energy self-sufficiency, the vulnerability of Saudi industrial facilities, and Iranian capabilities for resisting US attacks, as well as its exportation of large quantities of gas and oil to China. Everything converges on one factor, namely, the looming decline of the US dollar as the global reserve currency

We have recently been witnessing events of considerable importance in the Middle East, almost on a daily basis. The tensions between Washington and Tehran are fueled above all by the Trump administration’s need to placate most of the US deep state, wedded to neoconservativism, who march in lockstep with Trump’s financiers from Wahhabi Saudi Arabia and Israel.

The aggressive policy towards Tehran, consisting of provocations and false-flags, has recently resulted in the type of public-relations disaster for the US military-industrial that I have anticipated for years would happen.

This attack shocked policy-makers around the world by demonstrating how low-cost, asymmetric means of warfare can be effective beyond all expectations, able to inflict billions of dollars worth of damage with an outlay of just a few thousand dollars. The real extent of damage caused by the Houthi attack remains unknown, with Aramco struggling to provide official information.

More than 50% of the oil production was interrupted by the attack, with unconfirmed reports suggesting Riyadh may need to import considerable quantities of oil from Iraq.

As if this scenario were not enough to complicate Saudi survival plans, Israel and the neoconservatives are pushing for an armed response against Tehran that would see Saudi Arabia bearing most of the cost. The Al Saud family, aware of Iranian military capabilities, seems to have softened their belligerent tone against Iran.

In this already volatile Middle Eastern situation that risks uncontrollable conflagration, the risks for the Saudis are quite clear, and perhaps also all too well known to them. The Saudi kingdom exists in a precarious condition, held up by the welfare it extends to the population. If a war were to result in death, destruction and impoverishment, then how long could the House of Saud last before being overthrown in an Arab Spring-type insurrection guided by Washington? Saudi Arabia’s importance, it must be realized, lies not so much on who governs it but on its ability to control OPEC and impose the sale of oil in US dollars, thereby ensuring Washington’s centrality to the global economy thanks to the concept of the global reserve currency.

Beijing’s recent decision to grant a credit line of between 280 and 400 billion US dollars to the Islamic Republic of Iran is part of a broad-spectrum strategy that looks to the distant and not just immediate future.

Certainly Iran will benefit from this economic aid that will compensate for the lack of earnings from the sale of oil due to US secondary sanctions. Beijing intends to enter the Iranian gas and oil market, helping Iranian state-owned companies to develop fields, plants, logistics, ports and energy hubs, thereby ensuring a future supply of oil and gas for a country experiencing strong economic and demographic growth.

If we expand on the reasoning behind China’s intentions, and relate it to Middle Eastern and US interests, an interesting picture emerges, one that needs to be carefully evaluated.

We know that Washington boasts of having achieved energy self-sufficiency through fracking and shale gas, turning it into a net exporter. While there are doubts about the durability of the wells in question, the current situation seems to confirm that the US is much less dependent on Saudi and Middle Eastern oil to satisfy domestic demand.

Accordingly, many policy makers, including Generals Dunford and Mattis, interviewed recently by the CFR, explained how the change in the National Defense Strategy confirms how focus has moved from the well-known 4+1 framework (China, Russia, Iran, DPRK + Islamic terrorism) to a better-balanced 2+3 one (China, Russia + DPRK, Iran and Terrorism), in recognition of the return of great-power politics.

In geographical terms, this implies a future shift of military forces away from the Persian Gulf, Middle East and North Africa to the Far East. This is for the purposes of containing and surrounding (militarily, economically and technologically) Washington’s primary peer competitor, namely China

Beijing, in response to this encirclement, has a card up its sleeve. It can seek to replace the reserve-currency status of the US dollar by not only coming to Iran’s aid, which is fundamental to its Belt and Road Initiative (BRI), but also, at a later stage, seeking to woo Saudi Arabia (and OPEC) away from selling oil exclusively in US dollars. Moscow, with the development of OPEC+, can help its Chinese ally, shaping the LNG market with prices quoted in currencies other than the US dollar. Currently, Beijing and Moscow are trading in hydrocarbons by completely bypassing both the SWIFT payment system as well as the US dollar.

The Chinese have a well-planned operation in mind that could change the entire economic landscape of the world. China will firstly help Iran develop its exports while at the same time guaranteeing future supplies for itself, allowing both countries to shield themselves from American economic terrorism. Naturally, Iran’s sale of oil to China takes place outside of the SWIFT system, and therefore outside the purview of the US petrodollar combine.

With this move, Beijing seeks to secure the future sale of hydrocarbons for its enormously growing economy, ensuring the country’s continuing development, complementing the investments already made in North Africa (minerals and raw materials) and in the east of Russia (agriculture).

The real danger for US economic hegemony posed by China lies in Saudi Arabia. If Washington continues to rely less and less on the Saudis for oil imports, shifting its attention to Southeast Asia, then there will be less and less reason for the US to offer an impediment to Iran’s rise as a regional hegemon. Riyadh will therefore be forced to start looking around and reassess its place on the regional map.

Riyadh’s nightmare is that of a Shia arc stretching from the Mediterranean to the Persian Gulf, with China as its primary trading partner and Russia as its military partner. All of this without its US ally offering a balancing counterweight in the region!

China’s strategy with regard to Iran is to pressure Saudi Arabia to consider selling oil in currencies other than the US dollar. As things stand now, Beijing imports substantial amounts of crude oil from Saudi Arabia. This could change if China transfers its oil imports to Iran, paying for this oil in currencies other than the dollar, or maybe even simply in renminbi.

Should this contagion spread to Qatar (an Iranian economic partner of fundamental importance to the development of the South Pars/North Dome gas field) and other Gulf countries, Saudi Arabia would see its status as a gas- and oil-exporting economic power threatened, with such hopeful schemes as the Saudi Vision 2030 offering little in terms of compensation.

Beijing would be more favorable to importing primary goods, including gas and oil, in a currency other than the dollar, perhaps through a basket of currencies that better represents the multipolar context in which we live. It could be a basket modeled on that of the IMF, but with a smaller share of US dollars (or maybe none at all), so as to limit the influence of the Fed on foreign markets and the private finances of individual countries.

Beijing’s strategy seems to be designed to progress in phases, modulating according to the reaction of the US, whether aggressive or mild; a kind of capoeira dance where one never actually hits one’s opponent even when one can. Nevertheless, the long-term objective of this dance is to undermine the primary source of income and power of the United States: to wit, the US dollar as the world’s reserve currency.

The first phase of this strategy focuses on Iran and the precarious economic situation the country finds itself in, primarily as a result of US sanctions. In this first phase, Beijing’s credit line will serve to keep Iran afloat as it fends off American economic terrorism. A second phase will likely involve some kind of Iranian legislative change to allow Chinese state-owned companies to work alongside Iranian ones in the oil and gas fields. A third phase will probably see the involvement of Qatar in the development of the largest gas field in the world, shared between Doha and Tehran. Meanwhile, the BRI will continue to expand, moving to the outskirts of the Persian country and involving many Southeast Asian countries along the way, thereby expanding trade between different parts of the globe.

Confirming how this strategy is already in play, China is also seeking to safeguard its sea lines of communication in the event of any war. Beijing realizes how having strong naval capabilities is imperative, and has accordingly invested heavily towards this end.

In such a geopolitical context, it is difficult to imagine Saudi Arabia continuing to be so unquestioningly accommodating of American interests — selling oil exclusively in US dollars, while not receiving sufficient military protection or economic benefits in return. Washington has seriously miscalculated if it believes it can keep the US dollar alive as a global reserve while continuing to destabilize the world economically, continuing to disregard the military protection of its regional allies, and all this in spite of the rising Sino-Iranian-Russian alternative for all to see.

Between Obama and Trump there have been the Arab Spring, wars threatened and carried out, economic destabilization, financial terrorism, threats to allies, the sale of obsolete military hardware, and a change in strategy (“Pivot to Asia”) occasioned by the transition from a unipolar to a multipolar order. In such a changing world, the US dollar will inevitably be replaced with a basket of currencies, which will in turn wipe out the unlimited spending power that enabled Washington to become the superpower it is today.

Beijing understood this mechanism years ago, and now sees Iran as the catalyst for effecting epochal change. Iran is useful not only because the BRI transits through its territory, but because it also offers the economic checkmate to America’s petrodollar hegemon, offering itself as a stalking horse for approaching Saudi Arabia and bringing this kingdom into the multipolar fold.

Beijing’s economic and moral overtures to Riyadh will encounter problems, and the US, in recognition of Saudi Arabia’s importance in sustaining its petrodollar hegemony, will naturally resist this. Russia is contributing to this geopolitical transition by offering to sell defensive weapons to the Kingdom.

Obama and Trump’s efforts to undermine Beijing’s rise, by hook or by crook, have only ended up undermining Washington’s ability to maintain the US dollar as the global reserve currency — only kicking off the denouement of this privileged and unnatural arrangement.