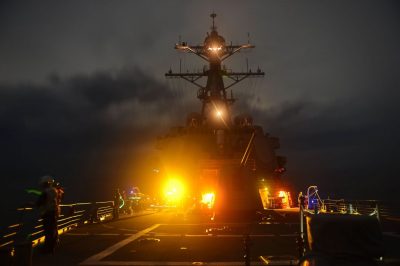 There’s no question the Chinese leadership, not exactly adept at state of the art Hybrid War techniques, is studying the Russian military strategies in excruciating detail.

So many Chinese “malign intentions”. And we’re not even talking about Russia.

Few people around the world are aware that the Pentagon for the moment is led by a mere “acting” Defense Secretary, Patrick Shanahan.

That did not prevent “acting” Secretary to shine in the red carpet when presenting the Trump administration’s 2020 Pentagon budget proposal – at $718 billion – to the Senate Armed Services Committee: the top US national security threat is, in his own (repeated) words, “China, China, China”.

“Acting” Shanahan has been in charge since Jim “Mad Dog” Mattis – the original butcher of Fallujah in 2004 – resigned last December. His former employer happened to be Boeing. The Pentagon’s inspector general is still investigating whether Shanahan was in fact acting as a no holds barred Boeing commercial asset whenever he met the Pentagon top brass.

That, of course, fits the classic Beltway “revolving door” pattern. Citizens for Responsibility and Ethics, a Washington-based group, actually filed a complaint around the fact that “acting” Shanahan blasted Lockheed Martin, Boeing’s competitor, in every top-level Pentagon meeting.

Shanahan told the Senate, “China is aggressively modernizing its military, systematically stealing science and technology, and seeking military advantage through a strategy of military-civil fusion.”

That includes Beijing’s development of a nuclear-capable long-range bomber that, according to Shanahan, will put it on the same level as the US and Russia as the only global powers controlling air-, sea- and land-based nuclear weapons.

It’s essential to remember that Mattis and Shanahan are the main authors of the National Defense Strategy adopted by the Trump administration which accuses China of striving for “Indo-Pacific regional hegemony in the near-term and displacement of the United States to achieve global pre-eminence in the future.”

Now compare it with Col. Larry Wilkerson’s view; the whole Pentagon show is all about offense while Russia and China are always emphasizing defense.

Even more enlightening is to directly compare the Pentagon approach with the General Staff of the Russian Armed Forces under its chief, Gen. Valeriy Gerasimov.

Gerasimov identified “the US and its allies” as engaged in permanent war of all types, including “preparation for ‘global strike’, ‘multi-domain battle’, [and the] use of the technology of ‘color revolutions’ and ‘soft power’. Their goal is the elimination of the statehood of undesirable countries, undermining their sovereignty, changing the legitimately elected public authorities. Thus it was in Iraq, in Libya and in Ukraine. Now similar actions are observed in Venezuela.”

So there it is, graphically explained: Venezuela, geostrategically, is as important to Moscow as Syria and Ukraine.

Gerasimov also detailed how, “the Pentagon has begun to develop a fundamentally new strategy of warfare, which has been dubbed the ‘Trojan Horse’. Its essence lies in the active use of the ‘protest potential of the fifth column’ in order to destabilize the situation with simultaneous strikes by precision-guided weapons on the most important targets.”

Then the clincher; “The Russian Federation is ready to oppose every one of these strategies. In recent years, military scientists, together with the General Staff, have developed conceptual approaches to neutralize the aggressive actions of potential opponents. The field of research of military strategy is armed struggle, its strategic level. With the emergence of new areas of confrontation in modern conflicts, methods of struggle are increasingly shifting towards the integrated application of political, economic, information and other non-military measures, implemented with the support of military force.”

Call it Russia’s response to Made in USA Hybrid War. With the major incentive of being a value for money operation; after all the Russian General Staff, unlike the Pentagon, is not in the business, for all practical purposes, of stealing trillions of dollars from taxpayers for several decades.

There’s no question the Chinese leadership, not exactly adept at state of the art Hybrid War techniques, is studying the Russian military strategies in excruciating detail.

Of course this is all intrinsically linked to Putin’s leadership. Last month, in Moscow, Rostislav Ishchenko, arguably the top Russian analyst of the Ukraine saga, explained it to me in detail:

“Putin does not ‘take over the elites’ or ‘guide the nation.’ His genius lies in an acute intuitive sense of the strategic needs of the nation (which creates a strong feedback and causes absolute trust of the absolute majority of the people), but most importantly, he is a master of political compromise, understanding the importance of maintaining peace between different social, economic, and political groups within the country, to ensure its stability, prosperity, and international authority. Given that foreign policy is always a continuation of domestic policy, we can clearly trace his desire for compromise in Russian international activity.”

“Putin, Ishchenko added, “does not try to suppress the opponents even in those cases when Russia is unconditionally stronger and the result of the confrontation will clearly be in her favor. Putin understands that both the loser and the winner lose in the confrontation. Therefore, he always offers a compromise for a long time, almost to the last opportunity, even to those who clearly do not deserve it, moving to other solutions only after the opponent has clearly crossed all possible red lines and can pose a threat to the vital interests of Russia. An agreement based on consideration of each other’s interests is always stronger than any short-term ‘victories’, which tomorrow will result in the need to reaffirm their status of the winner again and again. It seems to me that Putin understands this well. Hence the effectiveness of his actions. You can also take a look at his team. These are professionals who adhere to a variety of ideological views (or do not adhere to any). The main thing is that they perform their work qualitatively. The ability to manage such a team is another of its undoubted advantages. After all, these are all ambitious people who are aware of their professionalism and are able to defend their opinion, which is not always the same for everyone. Nevertheless, they work as a single mechanism and achieve really great results.”

Watch out for Yoda’s hordes

To expect the same from the US industrial-military-surveillance complex would be idle.

In fact, “acting” Shanahan’s deputy, Under Secretary David Trachtenberg, doubled down when addressing the Senate Armed Services Committee; he said that Washington will not relinquish its self-attributed right for a nuclear first strike.

In his own words; “A ‘no-first use’ policy would erode US allies’ belief that they are protected.” As if all US allies were begging in unison to be “defended” by US nuclear bombs. In true “war is peace” mode, this Orwellian state of affairs is justified under the Pentagonese notion of “constructive ambiguity”.

The 2018 Nuclear Posture Review (NPR) exhibits a long list of causes that may detonate a US nuclear first strike – including a worryingly vague attack on “allied or partner civilian infrastructure”. Even a clumsy false flag, for instance in the South China Sea, could lead to such a stand off.

All of the above is in fact directly linked to the death of Yoda.

Yoda is of course RAND asset Andrew Marshall, who was the director of the nefarious Office of Net Assessment at the Pentagon from 1973 to 2015.

Predictably, scores of Atlanticist think tanks are celebrating Yoda as the winner in devising the new rollback US “strategy” against China.

Yoda did groom scores of analysts across the whole spectrum of the industrial-military-surveilance complex – including think tanks, universities and mainstream media.

So in the end Yoda did body-slam Bismarckian Henry Kissinger – who remains alive, sort of (if Marshall was Yoda, would Kissinger be Darth Vader?) Kissinger always advised containment in relation to China, disguised as what he termed “co-evolution”.

Yoda finished off not only Kissinger but also the Obama administration’s wobbly and ill-defined “pivot to Asia”. Yoda preached hardcore confrontation with China. There’s no question that even beyond the grave, he’ll continue to rule over his warmongering Beltway hordes.