HOME / WORLD / Between the lines of the Biden-Putin summit 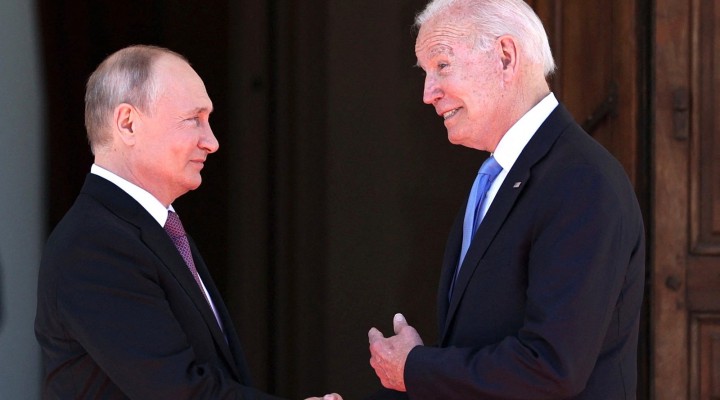 Let’s start with the written word.

In Geneva, the US and Russia issued a joint statement where “we reaffirm the principle that a nuclear war cannot be won and must never be fought.”

Assorted Dr. Strangeloves will cringe – but at least the world has it in writing, and may breathe a sigh of relief with this breakthrough of sorts. That doesn’t mean that a “non-agreement capable” US industrial-military complex will abide.

Moscow and Washington also committed to engage in an “integrated bilateral Strategic Stability Dialogue in the near future that will be deliberate and robust.” The devil in the details is in which “near future” the dialogue will progress.

A first step is that ambassadors are returning to both capitals. Putin confirmed that the Russian Foreign Ministry and the State Department will “start consultations” following the new START-3 treaty extension for five years.

Equally important was the actual Rosebud in Geneva: the Minsk protocol. That was one of the key drivers for the White House to actually request the summit to the Kremlin – and not the other way around.

The US establishment was shaken by the lightning-flash military buildup in Russian territory contiguous to Donbas – which was a response to Kiev provocations (Putin: “We conduct exercises on our territory, but we do not conduct exercises dragging equipment and weapons to the US border”).

The message was duly received. There seems to be a change of posture by the US on Ukraine – implying the Minsk protocol is back.

But that can all be – once again – shadow play. Biden said,

“We agreed to pursue diplomacy related to the Minsk agreement.”

To “pursue diplomacy” not necessarily means strictly abiding by a deal already endorsed by the UN Security Council which is being disrespected by Kiev non-stop. But at least it implies diplomacy.

A benign reading would reveal that some red lines are finally being understood. Putin did allude to it: “In general, it is clear to us what our US partners talk about, and they do understand what we say, when it comes to the ‘red lines.’ But I should say frankly that we have not gone as far as placing the emphases in detail and distribute and share something.”

So no detail – at least not yet.

Giving away the game

Talking before boarding Air Force One out of Geneva, a relaxed Joe Biden seems to have given away the game – in a trademark self-deluded way.

He said, “Russia is in a very, very difficult spot right now… They are being squeezed by China. They want desperately to remain a major power.”

This reveals a curious mix between zero knowledge about the complex, always evolving Russia-China comprehensive strategic partnership and outright wishful thinking (“squeezed by China”, “desperate to remain a major power”).

Russia is a de facto major power. Yet Putin’s vision of complete Russian sovereignty can only flourish in a true multipolar world coordinated by a Concert of Sovereigns: a realpolitik-based Balance of Power.

That’s in sharp contrast to the unipolarity privileged by the Hegemon, whose establishment considers any political player calling for sovereignty and multipolarity as a sworn enemy.

This cognitive dissonance certainly was not removed by what Putin, Biden and their extended teams discussed at Villa La Grange.

It’s quite enlightening to revive the arc from Anchorage to Geneva – which I have been chronicling for Asia Times for the past three months. In Alaska, China was hurled into a dingy environment and received with insults at the diplomatic table – responded in kind by the formidable Yang Jiechi. Compare it with the Hollywood-style ceremonial in Geneva.

The difference in treatment offered to China and Russia once again gives away the game.

US ruling elites are totally paralyzed by the Russia-China strategic partnership. But their ultimate nightmare is that Berlin will understand that once again they are being used as cannon fodder – which they are as it’s been clearly visible throughout the Nord Stream 2 saga.

That might eventually propel Berlin into the ultimate Eurasian alliance with Russia-China. The recently signed Atlantic Charter signals that the ideal scenario for the Anglo-Americans – shades of WWII – is to have Germany and Russia as irreconcilable opposites.

So the main American goal in the somewhat quirky Putin-Biden photo op (Putin smirk meets Biden looking into the distance) was to trick Putin into thinking Washington wants Russia “back into the fold”, moving Moscow away from Beijing and avoiding a triple alliance with Berlin.

What about regional stability?

There were no substantial leaks from Geneva – at least not yet. We don’t know whether Lavrov and Blinken actually did much of the talking when only the four of them – plus translators – were in the library room.

At the extended meeting, notorious Maidan cookie distributor Victoria ‘F**k the EU’ Nuland had a seat on the table. That might imply that even if US-Russia agree on nuclear stability, regional stability remains largely off the table (Putin: “What is stable in supporting a coup in Ukraine?”)

Biden vaguely referred to US and Russia possibly working together on humanitarian aid to Syria. That was code for Idlib – where NATO’s Turkey is actively supporting jihadis of the al-Nusra kind. Not a word on illegal American occupation of Syrian territory – complete with oil smuggling, and the fact that the real humanitarian crisis in Syria is a direct result of US sanctions.

Putin, in full command of the facts and insisting on logic, was clearly accommodating, emphasizing “no hostility” and “a willingness to understand each other”. Biden, to his credit, said disagreements were not dealt with in a “hyperbolic atmosphere” and his “agenda” is not directed against Russia.

Putin went into extreme detail explaining how Russia is “restoring lost infrastructure” in the Arctic. He’s “deeply convinced” the US and Russia should cooperate in the Arctic.

On cybersecurity, he was adamant that Moscow provided all information on US requests about cyber attacks, but never receives answers from the Americans. He emphasized most cyber attacks originate in the US.

On human rights: “Guantanamo is still working, does not comply with any international law”. And “torture was used in American prisons, including in Europe.”

Very important: they did touch upon, “casually”, the vaccine wars, and the “possibility” was evoked of mutual recognition of vaccines.

For the record: US mainstream media was invited for Putin’s presser – and felt free to lodge accusatory “questions” faithful to the “rogue Kremlin behavior” script while no Russian media whatsoever was allowed on Biden’s presser.

In a nutshell: applying Kissinger’s Divide and Rule to put a spanner in the Russia-China works was D.O.A. when you’re dealing with ultra-savvy players such as Putin and Lavrov.

Putin, in his presser, said, “I have no illusions, and there can be no illusions”. Later, Kremlin spokesman Dmitry Peskov was asked if Geneva would lead to the US being removed from Russia’s Unfriendly Nations list: “No…there are no grounds yet.”

Still, there are glimmers of hope. Stranger geopolitical things have happened. If warmongers are sidelined, 2021 might even end up as The Year of Strategic Stability.

0 thoughts on “Between the lines of the Biden-Putin summit”