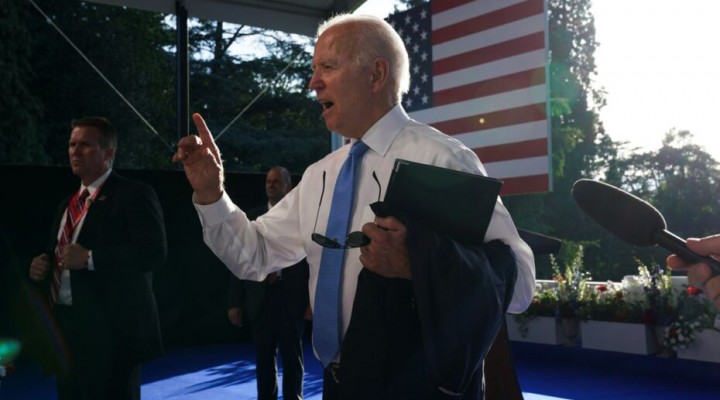 Biden said there is a “genuine prospect to significantly improve relations between our two countries”. Putin said there was a “glimmer of hope” for better relations.

A week, as the saying goes, is a long time in politics. And how true the axiom is when looking over the past week which began with U.S. President Joe Biden arriving in England and ended on a summit in Switzerland with Russian leader Vladimir Putin.

Biden began his itinerary – his first overseas trip as president – with tough talk towards Putin. He told troops at an American airbase in England: “I’ll let him [Putin] know what I want him to know.” Biden’s bravado received cheers from the assembled military.

Fast forward to Geneva, and the two men met with a cordial handshake and smiles, holding nearly three hours of talks which were characterized by both the U.S. and Russian side as constructive and positive.

Granted, there wasn’t an outpouring of affection nor a major-specific diplomatic breakthrough. The summit between Biden and Putin and their delegates was businesslike and pragmatic. But that in itself was a breakthrough in that diplomacy and dialogue excelled over belligerence and threats.

And it was Biden who had to make the concession. He was the one who had been ramping up the macho rhetoric when he arrived on his European tour and during subsequent meetings with G7, NATO and European Union partners during which Biden was pitching to read Putin the riot act over all sorts of alleged malign conduct.

Recall too that soon after he became U.S. president, Biden had referred to Putin as a “killer” and warned that Moscow would “pay a price” for alleged cyberattacks on American companies. The “killer” remark resulted in Russia withdrawing its ambassador from the United States and advising Washington to return its own ambassador for “consultations”.

All of the macho display was shelved when Biden finally met with Putin face-to-face this week. In later separate press comments, both leaders said there were “no threats, no ultimatums, no strident hyperbole”.

There were “differences” aired but it was done in a respectful manner where both sides were permitted to agree to disagree. Biden said he brought up the issue of Ukraine’s national security, political upheaval in Belarus, human rights concerns and the imprisonment of opposition figure Alexei Navalny, among other topics.

But there was no “reading the riot act” by Biden to Putin about earlier vehement accusations of Russian interference in U.S. elections or cyberattacks.

For his part, Putin said he rejected American criticisms over human rights in Russia, mentioning that the United States has its own serious internal problems. Putin said the outstanding issue with Ukraine was the lack of implementation of the 2015 Minsk peace accord by the Kiev regime. Biden concurred that the Minsk accord was a priority.

There were also discussions about conflicts in Syria and Libya as well as the importance of cooperation over reviving the Iran nuclear accord and over developments in the Arctic region.

In spite of differences, there were three areas of progress. First, a mutual commitment to increase strategic stability through strengthening control over nuclear weapons by extending the New START treaty. Both sides said they were appointing technical teams to work out details. Biden and Putin issued a joint statement repudiating nuclear war. That was a major reassurance of common commitment to global peace and security at a time of spiraling tensions between the two nuclear superpowers.

The second area of progress was the commitment to appoint technical teams to improve cybersecurity. This marked a significant scaling back by the Americans on earlier accusations against Russia as being responsible for cyberattacks on U.S. infrastructure. Putin told Biden that Russia is also a victim of cyber hacking emanating from the United States. The move towards a possible security pact is what Russia has long been proposing to the U.S. which up to now rejected such appeals. If Biden follows up on commitments to work with Russia in improving cybersecurity then that marks a dramatic and welcome shift away from dangerous rhetoric blaming Russia as some kind of rogue state waging “hybrid warfare”. The real issue is international cybercrime which afflicts all countries.

On returning to Russia, Putin commented on the importance of cooperation in this area, saying: “It’s critically important to combine our efforts to fight cybercrime instead of barking at one another like dogs.”

A third positive, tangible sign is the United States and Russia agreeing to return their ambassadors to respective envoy duties on each other’s territory. The row had blown up out of Biden’s insult to Putin about the latter supposedly being “a killer”. After their Geneva summit, Putin indicated to media that Biden had more or less retracted that remark.

So, what are we left with? Biden said there is a “genuine prospect to significantly improve relations between our two countries”. Putin said there was a “glimmer of hope” for better relations.

It is early days before we can see how the bilateral relation pans out for better or worse. But surely the main thing is that both sides have opened up a dialogue based on mutual respect, notwithstanding acute differences.

Moscow has consistently called for dialogue and a normalizing of relations for the sake of global security. It is Washington that has up to now been acting as the rogue state and aggressor. All that belligerence melted away when Biden met Putin.

A telling reaction is how the Russian media generally welcomed the thawing of relations and the potential for progress. By contrast, the American media – both Republican and Democrat – were palpably annoyed that Biden had wound his neck in by not being hostile towards Putin.

Once again, it seems, as during the previous Trump administration, the chance of normalization between the U.S. and Russia is at the mercy of irrational Russophobia among America’s political and media classes.

0 thoughts on “Biden Winds Down Tensions in Positive Putin Meeting”