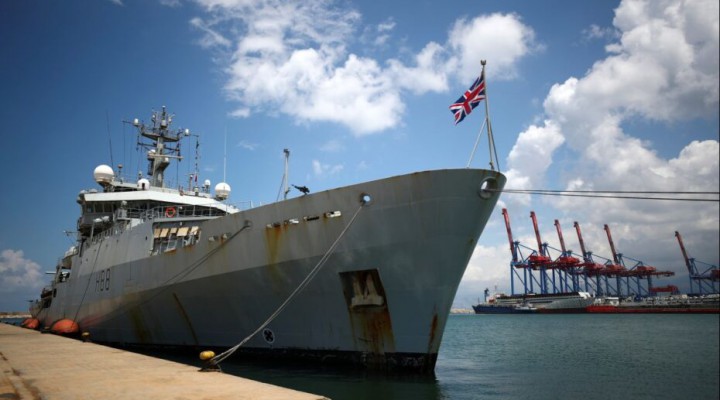 The British are being told that they cannot just sail their warships into the Black Sea and rattle their sabers in Russia’s face. Putin is telling the Brits and anyone else not to even think about getting that close.

Russian President Vladimir Putin issued a stern warning to countries trying to provoke military tensions, saying that his nation is drawing up red lines for defense.

Putin delivered the sharp remarks during his annual state-of-the-nation address to lawmakers from both chambers of the Russian parliament. The stark warning comes amid spiraling tensions over Ukraine between Western supporters of the Kiev regime and Russia.

Specifically, days before Putin’s set-piece speech, British media reported that Britain’s Royal Navy is planning to deploy two warships to the Black Sea: a Type-45 destroyer armed with anti-aircraft missiles; and a frigate for hunting submarines. A British ministry of defense spokesman is quoted as saying the move was a sign of “unwavering support for Ukraine’s territorial integrity” in the face of alleged Russian aggression.

The British deployment is planned to take place in the coming weeks. The two warships will transit Turkey’s Bosphorus Strait to enter the Black Sea. International shipping is permitted under the Montreux Convention. However, the British plan seems far from an innocent passage, and a rather more calculated provocation.

The two ships will be part of a bigger battle group, the newly launched HMS Queen Elizabeth aircraft carrier which will station in the East Mediterranean. The battle group will be able to supply F-35B Lightning fighter jets and Merlin helicopters with submarine-hunting missiles. All in all, it is a pretty audacious attempt by the British to raise tensions with Russia.

It is notable that the United States last week abruptly cancelled sending two of its guided-missile destroyers to the Black Sea after Russia mobilized its own fleet in the region and warned the Americans to “stay away”. Days later, the British seem to have stepped into the breach with their proposed Black Sea operation. Did the Biden administration ask London to step up to the plate and to show “solidarity”, or is the British maneuver a gambit to curry favor with Washington by flexing AngloSaxon muscles for Uncle Sam?

In any case, London’s move comes on the back of an already brazen buildup of British military forces in the Black Sea. Britain has previously sent naval personnel and equipment to train Ukrainian warships. The Royal Air Force has also dispatched a squadron of Typhoon fighter jets to patrol the Black Sea in support of the Kiev regime and its claim to take back control of the Crimean Peninsula. The Peninsula voted in a referendum in March 2014 to join the Russian Federation after a NATO-backed coup d’état in Kiev the previous month which ushered in an anti-Russian regime.

The Kiev regime has also been stepping up its violations of the ceasefire in Eastern Ukraine where ethnic Russian populations have declared breakaway republics in defiance of the 2014 NATO-backed coup. Civilian centers in Donetsk and Luhansk are being shelled on a daily basis. This is clearly a cynical attempt by the Kiev regime to escalate the civil war in such a way as to drag NATO further into the conflict. Russia has mobilized sizable army divisions on the border with Ukraine in what Moscow says is a matter of national self-defense. Yet, ironically, the United States, Britain, and other NATO powers are demanding Russia to “de-escalate” tensions.

NATO’s very public backing for the Kiev regime and the supply of American lethal weaponry is no doubt emboldening the regime to step up its offensive fire on Eastern Ukraine and making menacing moves towards Crimea.

The British are in particular giving the Kiev regime a dangerous sense of military license for its bravado towards Moscow.

The situation is an extremely dangerous powder-keg. One wrong move, even unintended, could spark off a wider war involving the NATO powers and Russia.

In this highly combustible context, Russia is right to close off areas in the Black Sea that encompass its territorial waters. Those areas include the coastal waters off the Crimean Peninsula.

NATO powers sending warships into the region is the height of criminal folly. If Britain and other members of the U.S.-led alliance contend that they are “defending Ukraine’s territorial integrity” then the logic of that position dictates that they will attempt to make an incursion into Crimean coastal water since they don’t recognize Russia’s sovereignty. In that event, a military confrontation is bound to happen.

President Putin’s declaration of red lines is not so much a rhetorical putting it up to the West. It is a responsible position to prevent a war from breaking out.

The British are being told that they cannot just sail their warships into the Black Sea and rattle their sabers in Russia’s face. Putin is telling the Brits and anyone else not to even think about getting that close.