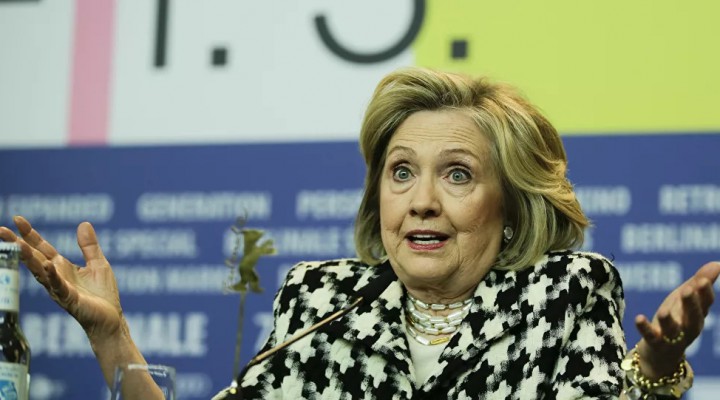 The US director of national intelligence has released a Russia intel report dated July 2016 that claimed then-presidential candidate Hillary Clinton had “approved” a plan to stir up a scandal against Donald Trump by linking him to Moscow and the Russian hacking of the DNC in order to distract the public from her use of a private mail server.

Sputnik has spoken to Dr Paul Craig Roberts, an American economist and former assistant secretary of the Treasury for economic policy under President Ronald Reagan, in order to discuss the revelations made by John Ratcliffe, director of national intelligence, about the 2016 election campaign in the United States, the so-called Russiagate conspiracy, the ongoing attacks on President Donald Trump, and more.

Sputnik: US Director of National Intelligence (DNI) John Ratcliffe has released a Russian intelligence report dated from July 2016 that claimed then-Democratic presidential candidate Hillary Clinton “approved” the spreading of a conspiracy theory linking then-Republican candidate Donald Trump to Moscow, which eventually became the Russiagate scandal. How might the situation develop in the wake of this revelation?

Dr Paul Craig Roberts: Well, first of all, this revelation will not get any attention from the American media. And if the revelation is mentioned at all, it will only be to debunk the report or to use it as evidence of Russian help to Trump.

Secondly, Americans who think for themselves already or are aware of Hillary’s role in allying the Democrats with the CIA and the FBI attack on Trump as the Russiagate was something that was orchestrated by the CIA and the FBI. And it served the Democrats. Hillary made sure to join them up, but the media is not going to pick this up. The United States’ military security complex needs Russia as an enemy in order to justify its budget and power. So that is the reason that Trump has not been allowed to normalize relations with Russia, and to keep the state of tensions between the two countries is important to the military security complex. And the Democrats have learned how to use it against Trump and so it’s a very dangerous situation in terms of geopolitics.

Sputnik: What can you say about the timing of this revelation? To what extent does this further blow up all the pre-election rhetoric?

Dr Paul Craig Roberts: Well, the American media is not interested in facts. It’s propaganda. It serves the ruling elites. The current pre-election rhetoric is about discrediting Trump’s reelection and forcing him out of office. So that is at the moment seen as a much more powerful weapon against Trump, that he’s not going to step down when he loses or the claim that if he wins, it’s only because of fraud. That’s what’s going on now. And the Russian connection is sort of dropped way back.

Sputnik: The report claimed that then-US President Barack Obama and “other senior national security officials” were briefed on the matter. Why was there a lack of response then with regard to this “witch hunt” as current President Donald Trump claims?

Dr Paul Craig Roberts: There was a lack of response because Obama, the CIA and the FBI were behind the plot. It was their plot.

They didn’t want their own plot to be investigated. Even today, we still haven’t had the investigation. Allegedly, the attorney general Barr has assigned a U.S. attorney, I think his name is Durham, who investigated all of this. There’s been no outcome. And it’s very, very close to the election. The United States has an establishment, and that establishment is Democrat and Republican, and its interests always come before the interests of any particular president or even any particular party, both in the establishment. That interest has to be protected. So that’s that’s the answer.

Sputnik: Senate Judiciary Committee Chairman Lindsey Graham said “The question is, did the FBI investigate the allegations against Clinton like they did Trump? If not, why not?” How would you assess the issue that chairman Graham is raising? Is there some kind of a double standard within the FBI?

Dr Paul Craig Roberts: As is well known among those who pay attention, the FBI was part of the plot. So the FBI is not going to investigate itself. Now, Senator Graham can try to call attention to the FBI’s role, but the media will not pick it up. The only way to correct this situation: the FBI would have to be broken up and reformed with new leadership that was not part of the military security complex. That’s what John F. Kennedy was going to do to the CIA. When you have a media that is not a media and is not serving the sitting president, it’s very hard for any information to get out that’s unfavourable to the interest the media represents.

Sputnik: Democrats have already played the “Russian card” several times. How viable is this rhetoric right now, in your view? How appealing is this to voters?

Dr Paul Craig Roberts: Well, the “Russian card” has been discredited even, I think, among the indoctrinated masses. Nothing ever came out of it. Mueller was unable to find anything. So this, I think, means the Democrats will hesitate before they trot out the Russian card again. It’s just not worked. So why bring it back and remind everybody?

The new issue is that if Trump wins, it will be the result of vote fraud. And if he loses, he will refuse to leave office. It’s these claims that are being used to justify a Democrat color revolution against Trump. What we are told everyday by the press, indeed by the world, the world hears this, is that Trump’s not going to leave office when he loses. He’s got to be thrown out. And everyone’s being told that he can’t win unless by fraud. If he wins, it won’t be perceived as winning, it will be perceived as fraud. And so we have the media already prepared everybody that he has to be evicted. So they have laid the foundation for colour revolution, just as they did in Ukraine and everywhere else. This is the same thing. It’s the same newspaper headlines, the same words. And that’s really what people should be paying attention to. Now there’s a colour revolution prepared. If it wasn’t prepared, we would not have constant allegations that Trump’s not going to leave office when he loses. And there’s no expectation in any newspaper headline that he could win.

Of course, It’s possible that part of the propaganda against him, if he wins, is that the Russians helped him steal the election. The main propaganda is that he’s not going to step down. He can’t win unless it’s fraud. So a superpower may experience a colour revolution.

Look, I used to be an editor at “The Wall Street Journal”, and really the kind of people in the media today… we would never have hired them. Not one of them is fit for the job. They have no integrity. They have no honesty. And they don’t know anything. And they read scripts handed to them. There is nobody today at CNN, MSNBC, New York Times, Washington Post, National Public Radio. None of those people could possibly have qualified for a job at the Wall Street Journal when I was there.