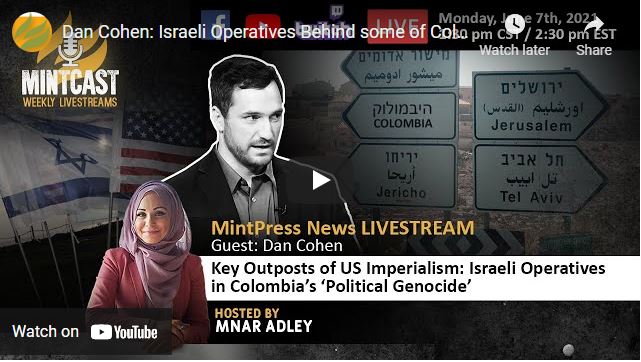 Although on opposite sides of the world from each other, Colombia and Israel have much in common. Among other similarities, they are both key outposts of U.S. power in their regions, helping make their neighborhood safe for American businesses and American profits.

Colombia is regularly described as the Israel of Latin America. Although on opposite sides of the world from each other, the two countries share many similarities. They are both key outposts of U.S. power in their regions, helping make their neighborhood safe for American businesses and American profits. Both governments are carrying out wars against indigenous populations. Both talk of a “peace process” with their enemies but neither seems to get any closer to a lasting agreement. And both smear those enemies as terrorists.

Violence in both nations has made worldwide headlines of late. In Colombia, President Ivan Duque’s attempts to push through an economic shock therapy package consisting of privatizing the country’s pension and healthcare systems, reducing the minimum wage, and increasing taxes on basic necessities sent millions into the streets in a nationwide general strike.

Duque has responded with an iron fist, sending first armed police and then the military into the streets to quell the protests. According to local human rights group Indepaz, 71 people have been killed, as armored cars fill the streets and drones and helicopters terrorize strikers from above.

Meanwhile, in Israel, security forces attacked the Al-Aqsa Mosque in Jerusalem as worshippers were celebrating Ramadan at the third holiest site in Islam. The attack drew a response from Hamas, which began firing rockets into Israel, which, in turn, led to a massive Israeli reaction, with the IDF pounding much of Gaza into rubble. Hundreds of people were killed, thousands injured, and tens of thousands fled their homes. Among the buildings targeted were schools, a COVID-19 test center, and the headquarters of international media organizations.

Unusually, Israeli actions drew criticism from the centers of power in the United States, with senior politicians and media figures alike condemning the attack and using words like “apartheid” and “ethnic cleansing” — a signal that perhaps a change in attitude is beginning to take place and real change could be around the corner.

Yet a new investigation from our guest today has highlighted how the links between Israel and Colombia go far deeper and how Israeli officials were the masterminds of political massacres carried out by the Colombian government.

Dan Cohen’s new work shows how the Colombian government’s genocidal policy of massacring its political opponents — over 4,000 members of the Patriotic Union Party, including two presidential candidates, 14 parliamentarians, 15 mayors, nine mayoral candidates, three members of the House of Representatives and three senators — was done on the suggestion of an Israeli official, Rafael ‘Rafi’ Eitan. Eitan was employed by the government to advise it on counterinsurgency strategies.

Another Israeli, Yair Klein, provided the training for many of the most notorious far-right paramilitary groups, including the AUC, thought to have been responsible for around 80% of the killings during the civil war. The leader of the AUC, Carlos Castaño, was educated in Israel and credited the aprtheid state for teaching him all he knew about terrorism. “I learned an infinity of themes in Israel,” he wrote in his autobiography.

Dan Cohen is a journalist and filmmaker in Washington, D.C. with Behind the Headlines, a new viewer-supported investigative journalism series. Dan has also contributed to a wide range of news outlets, including Al-Jazeera, Alternet, The Grayzone and RT. His film, “Killing Gaza,” explores Operation Protective Edge, the 2014 Israeli assault on the highly populated strip. His latest article, which is discussed today, is called “New Investigation Reveals Role of Israeli Operatives in Colombia’s ‘Political Genocide.’”

Birds of a Fascist Feather: Why Israel Is Aiding Colombia’s Crackdown on Protesters

Colombian state violence and its imperialist role destabilizing the region