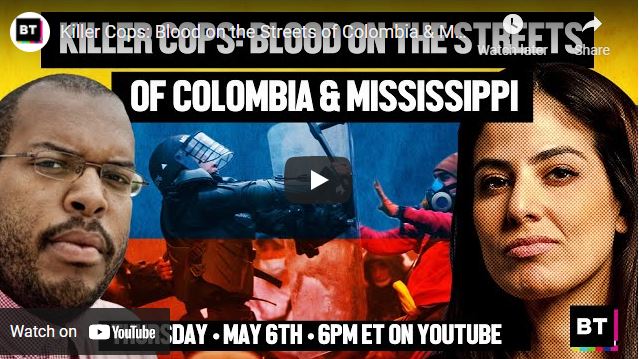 Tonight hosts Eugene Puryear and Rania Khalek talk about cops cracking down on protesters in Colombia, Mississippi cops who killed a baby, an update in Rayshard Brooks’ case in Atlanta, and more. Join us for an all-star lineup including Zoe Alexandra, Mariah Parker, fan favorite Sean Blackmon, and a special guest at 8 p.m.

“The irony of course is that the vast majority of this aid that goes to Colombia is for counter-narcotics, yet, somehow, a lot of this [narco-state] is revolving around drug trafficking. Wherever the Americans go, the drugs seem to flow.” @RaniaKhalek

“What is the point of electing progressive Democrats to Congress if they don’t do anything about the biggest problem right now, which is escalation with China?” @RaniaKhalek

“I keep going back to Kyle Rittenhouse walking around untouched and unharmed in Kenosha with an AR-15 after having killed someone. Why can’t that same level of humanity be extended to poor Black and Brown people in this country?” @RaniaKhalek

People in America, we are supposed to be the richest country in the world, but tens of thousands of people die every year because they can’t access healthcare because we have a privatized health care industry where we put profits over people @RaniaKhalek

Colombian state violence and its imperialist role destabilizing the region

One Minute Before the Chauvin Verdict, Another Cop Murder?

The Digital Police State Is Being Institutionalized Throughout the Western World

0 thoughts on “Killer Cops: Blood on the Streets of Colombia & Mississippi”