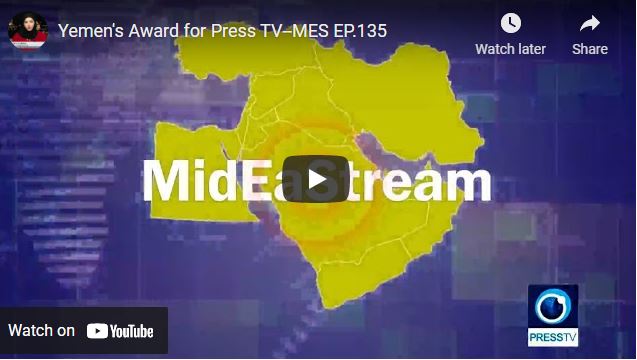 Press TV was honored last week to receive an award from Yemen’s Prime Minister Abdulaziz bin Habtour for its prominent role in standing by the Yemeni people and exposing the crimes of the US-Saudi-Emirati-led aggression since the beginning of the war. Participants praised Press TV for its constant support of the Yemeni people and its major role in exposing the vicious and absurd Saudi war on Yemen. For this week, The MidEaStream as an exception will not have an intro but rather we will have special guests from Tehran and Yemen to highlight Press TV’s commitment to the Yemeni people by being always resent in the field to keep pace with the advancements of the Yemeni armed forces and the national defense forces while documenting the Saudi violations against Yemen.

To discuss this issue with us from Beirut is Taleb Al Hassni, anchor at Yemen’s Al Massira channel in Beirut.

Also with us from Tehran is Marzieh Hashemi, senior anchor at Press TV news channel.

On a hill overlooking Beirut and its eastern and northern suburbs, within a property covering an area of 174,000 square meters, and at a suspicious cost of one billion and 200 million dollars, the new building of the “Embassy” of the United States of America in Lebanon will be built in a location that is only 250 meters away from its current location, to be its second largest embassy in west Asia after the one in Baghdad, which had also cost $600 million. The project will supposedly be ready in early 2025, however the influence of those who operate inside it is putting the country on the line of internal insecurity and brewing tension as the country heads towards elections next year.