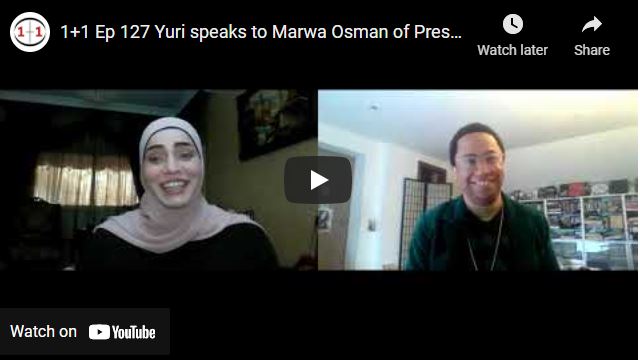 On this episode of 1+1 I had the grand honor to interview Marwa Osman, a Lebanese educator in university, a broadcaster with her own program on Press TV, brilliant geo-political analyst, anti-imperialist, Pan-Middle Easternist thinker and if expert actually existed she’s a true expert.

We talk about how Lebanon has been faring since the port blast in which mass corruption along with criminal negligence is to blame, how Lebanese sectarianism, Western imperialism, Gulf imperialism, and corrupt NGOS have made Lebanon into a failed state and how can the Western left leaning anti-imperialist audience help out and it starts by us fighting imperialism in our home countries/the bell of the beast.

Marwa Osman also explains who is the strongest political force to move Lebanon forward and rid itself of the divide and conquer of external actors and inner ones to, and we discuss the very positive role of none other than Hezbollah itself. We also discuss the impact of sanctions on Iran and the strong resilience of the Iranian people to overcome them, and how Yemen is faring in the face of an ongoing brutal Western/Gulf genocidal war similar to Syria, and how Syria itself is rebuilding with still ongoing Western/Gulf backed warfare and economic terrorism. She then explains the infighting happening in the Jordanian monarchy and what the disputes are about in a country often seen as more secular and stable compared to the rest of the Middle East and dodgy Gulf monarchs. And the efforts to oust Imran Khan of Pakistan because he’s finally standing up to the imperialists he was cozying to.

and lastly We discuss how a Pan-Middle Easternist, secular, feminist and left leaning movement can be formed in Middle East with similar nations in North Africa and neighbors like Turkey in which secularists, the devout, Christians, Jews, Muslims of all types, communists, Kurds, and Persians can all unite as one and put an end to ongoing imperialism and divide and conquer and sectarianism. How can Lebanon be a model for that and Mrs. Osman answers the James Lipton Questionnaire brilliant.