HOME / Exclusive Subjects / THE FARCICAL DIKTAT OF THE CENTURY 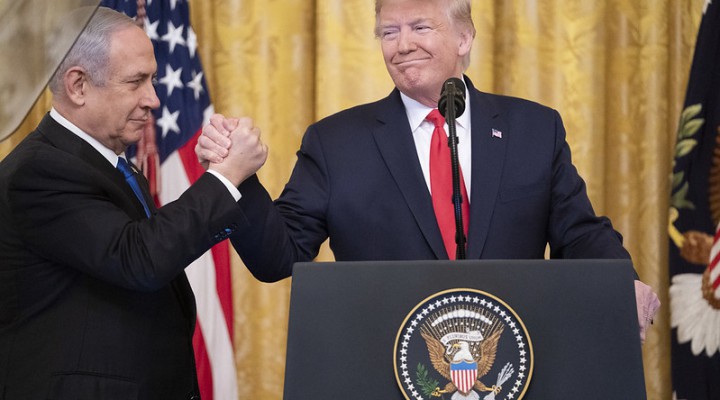 Exclusive– Trying to offer a comprehensive analysis of the so called “Deal of the Century”, the proposal to solve the Israeli-Palestinian conflict presented by President Trump on 28 January is not difficult, it is simply useless.

“Peace to Prosperity: A vision to improve the Lives of the Palestinian and Israeli People“, the formal name of the document, it will probably go down in history as one of the biggest scams in the annals of international diplomacy.

Firstly, it is necessary to clear the field of a gross misunderstanding that is likely to be generated by the announcement made by the US President: Peace to Prosperity is not an American document or proposal. It is a document drawn up by Israeli officials upon which the seal of the United States Government has been placed. A document largely based on the speech that Benjamin Netanyahu gave to the University of Bar-Ilan in 2009. The way it is written, the thesis it presents, and the arguments offered in support are far away from the standard format and content of US diplomatic documents on the Middle East. All the narrative of the conflict that exudes from the text is purely an Israeli one. This would already be enough to finish the comment about it and close this article.

Even before the content of the proposal there are gross problems in the in the very use of words in its label and title. Trump has always heralded it as the Deal of the Century. Complacent press immediately took up this gross definition by the American President, often inclined to bombastic statements and comparisons that, however, usually have little adherence to reality. The problem is that the word “deal” implies the meeting of two wills; here we have only the Israeli one. And in case there were any doubts, the choreographic staging of the presentation of the “deal” has largely dispelled them. Alongside the President of the United States there was only the gloating Prime Minister of Israel and no member of the Palestinian Government. In the audience there were the Ambassadors of three Arab countries for which, apparently, the Palestinian question is no longer of any value: United Arab Emirates, Bahrein and Oman. At least Trump and Netanyahu had the good taste not to ask them to join them on stage. In short, a more realistic and reality-oriented journalistic title of what happened at White House on January 28th should be: The Diktat of the Century.

The second problematic word is “vision.” Peace to Prosperity offers indeed a vision not a solution. To turn such a vision into reality, the Palestinians are required to engage in four years of negotiations with the Israelis. It is not clear what else the Palestinians should negotiate since all the knots of the dispute – the 1967 borders, the status of Jerusalem, the right to return of Palestinian refugees and Israeli settlements to the occupied territories – have already been pre-emptively awarded to Israel by the “American” proposal.

The goal set by the “vision” also seems disjointed from reality: “improving the lives of Palestinians and Israelis.” In the light of the events of recent decades, the only people who really need to see its existence improved is the Palestinian one, under occupation for decades and harassed under the complicit silence of the mainstream media and of the “international community” (i.e. Western democracies). Israel is a vibrant democracy and its economy, fortunately, it is growing; its population enjoy high living standards and, contrary to the propaganda that its government has been spreading for over ten years, it does not have to face any serious existential threat except those determined by its own deliberate political choices.

With all these premises, it is not even worth delving into a detailed examination of the more than 180 pages of the document; it would affect the health of the writer and probably that of the readers as well.

Suffice to say, there is no line in the basic political assumptions used by Peace to Prosperity that is truthful; likewise, none of the solutions it contemplates present a modicum of impartiality.

Trump and Netanyahu, two leaders under investigation in their respective countries for some alleged crimes, and who may also have to leave soon the political scene, have agreed on a unilateral solution on a long-standing issue whose political premises were established 103 years ago by another unilateral act, by the United Kingdom (the Balfour Declaration), and whose attempted composition was clumsily orchestrated in 1947 through a partition plan of historic Palestine by the UN which awarded the Jewish population (about a third of the entire population of the time) about half of that territory. Many conflicts and an interminable series of mediations and negotiations have failed to solve it. Making a list of responsibilities would be too long, and, once again, useless. Very few in the United States and Europe have a desire to really investigate how things have gone in the last thirty years; that is, since the so-called Peace Process began. The prevalent mood in the so-called “international community” is to move forward.

However, the Palestinians are being tipped with fifty billion dollars in alleged, and conditioned, investments to bend to the diktat. Arab countries will be probably requested to foot this bill and also to keep their Palestinian refugees: this is quite a big deal for them!

The sad truth is that if it had been just a matter of money (as unforgivable Western political culture still tends to manage almost all the issues) the conflict could have been closed decades ago. Unfortunately, the Palestinians have never seemed so inclined to trade their legitimate rights supported by the International Law for some economic benefit. There is a word that describes this attitude very effectively: dignity.

In short, the solution devised for the Palestinian problem is a sort of zoo. The Palestinians locked up in a series of cages (enclaves or cantons) surrounded by highly guarded alleys (separate and dedicated roads), without any control of their airspace, naval and land borders and, last but not least, vital resources (water, etc.). If some of them wish to call this fiction a State are, of course, free to do it. This is the only authentically American intellectual contribution to the Israeli-Palestinian problem, already successfully tested between nineteenth and twentieth centuries to “fix” the question of Native Americans. For those not familiar with the term, we refer to the people inhabiting America before the European colonization, commonly known as the ferocious “Redskins”, the negative protagonists of hundreds of Hollywood movies that in the last hundred years have completely altered the global perception about part of the history of the world’s greatest and most powerful democracy.

History, as it is known, repeats itself, first as a tragedy, and then as a farce.

0 thoughts on “THE FARCICAL DIKTAT OF THE CENTURY”