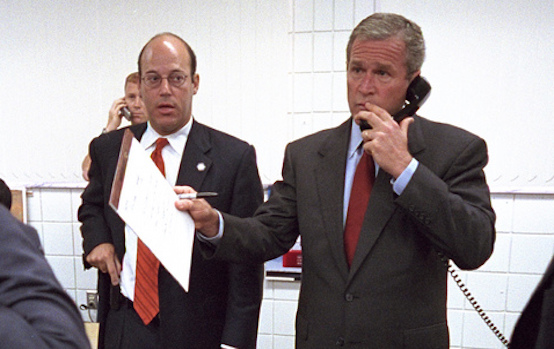 The former Bush mouthpiece had more to do personally with the Iraq WMD catastrophe than he wants us to believe.

Ari Fleischer, the former White House Press Secretary under President George W. Bush, ignited a firestorm of controversy Wednesday when, while commenting on the 16th  anniversary of the U.S invasion of Iraq, he sought to defend the reputation of his boss when it came to the veracity of the claims about Iraqi Weapons of Mass Destruction (WMD) that underpinned President Bush’s case for war.

“The Iraq war began sixteen years ago tomorrow,” Fleischer tweeted on March 19. “There is a myth about the war that I have been meaning to set straight for years. After no WMDs were found, the left claimed ‘Bush lied. People died.’ This accusation itself is a lie. It’s time to put it to rest.”

Fleischer goes on to declare that “The fact is that President Bush (and I as press secretary) faithfully and accurately reported to the public what the intelligence community concluded,” before noting that “The CIA, along with the intelligence services of Egypt, France, Israel and others concluded that Saddam had WMD. We all turned out to be wrong. That is very different from lying.”

As a Chief Weapons Inspector with the United Nations Special Commission (UNSCOM) in Iraq from 1991 through 1998, I was intimately familiar with the intelligence used by the U.S.  Intelligence Community to underpin the case for war (which I debunked in June 2002 in an article published in Arms Control Today). Armed with the unique insights that came from this experience, I can state clearly and without any reservation that Ari Fleischer, once again, has misrepresented the facts when it comes to the Bush administration’s decision to invade Iraq in March 2003.

The fact is, the Iraq War was never about WMD. Rather, it was waged for one purpose and one purpose only—regime change. Getting rid of Saddam Hussein was the sole focus of this effort, and the so-called “intelligence” used to justify this act was merely an excuse for action. Ari Fleischer knows this, and to contend otherwise—as he does via twitter—is simply a continuation of the lies he told from the very beginning about the U.S.  case for war with Iraq.

UNSCOM had, by the fall of 2002, been relegated to the pages of history, replaced by a new inspection organization, the United Nations Monitoring, Verification and Inspection Commission (UNMOVIC). It is through the work of UNMOVIC that Ari Fleischer’s defense of George W. Bush collapses. In November 2002 the Bush administration pushed for the UN Security Council to pass Resolution 1441, which found Iraq to be in “material breach” of its disarmament obligations. Inspectors from UNMOVIC were dispatched to Iraq shortly thereafter in a last-ditch effort to account for the totality of Iraq’s WMD.

The work of the inspectors was undermined from the start by the Bush administration, led by Ari Fleischer. “It is very well true that the inspectors who are working as diligently as they can in an environment made very difficult for them by Iraqi actions, may not be giving notice,” Fleischer explained in a press conference, “but that does not mean Iraq is not receiving notice as a result of their electronic means and other means to know what the inspectors are doing. Which puts the inspectors in a very hard position.”

But Fleischer had no evidence that Iraq was getting advance notice, and the experience of UNMOVIC inspectors on the ground suggested otherwise. When asked by a reporter about the possibility of giving the UN weapons inspectors more time to complete their task, Fleischer fired back, asking “More time for what? More time to be run-around by a regime that has not complied, that has concealed its weapons, and that has grown throughout the years—particularly the four years when no one was in the country—extraordinarily good at hiding what they have and deceiving those who are there to do their level best.”

Left unsaid was the fact that the inspectors had repeatedly asked the U.S.  for access to the very intelligence being used to underpin the American claims that Iraq was holding on to prohibited WMD and were denied. “If the UK and the U.S. are convinced and they say they have evidence,” Hans Blix, the head of UNMOVIC, had noted on December 20, 2002, “then one would expect they would be able to tell us where is this stuff.” When asked if they were getting cooperation from U.S.  and Western intelligence agencies, Blix replied, “Not yet. We get some, but we don’t get all we need.”

In 2010, Blix commented on the provisions of Security Council resolution 1441, which had declared Iraq to be in “material breach” of its obligation to disarm, and which was cited by Ari Fleischer to justify the invasion and occupation of Iraq in March 2003. “The declaration, I felt, might give Iraq a chance for a new start,” Blix noted, “except that it was very hard for them to declare any weapons when they didn’t have any.”

This is the conclusion that anyone taking umbrage with Ari Fleischer over his attempt to whitewash the role he played—as an extension of President George W. Bush—in facilitating the Iraq War should rely on. Deflecting blame onto the U.S.  intelligence community ignores the fact that the decision to go to war was the exclusive purview of the Executive Branch that Fleischer served. Iraq’s alleged retention of proscribed WMD were merely an excuse to achieve the higher goal of regime change. The inspection process initiated in November 2002 to investigate Iraq’s WMD programs was, from the U.S. perspective, a façade created to justify a decision to go to war that was made long before the inspectors ever set foot on the ground.

“Intelligence,” therefore, was an artifice manufactured by the Bush administration as a smoke screen. A memorandum prepared by the head of the British MI-6 intelligence service, Richard Dearlove, following a July 23, 2002 meeting in Washington, DC, underscores this truth: “There was a perceptible shift in attitude. Military action was now seen as inevitable. Bush wanted to remove Saddam, through military action, justified by the conjunction of terrorism and WMD. But the intelligence and facts were being fixed around the policy.”

Bush knew that the engagement with the United Nations, including the crafting of resolution 1441 and the dispatch of inspectors to Iraq, was simply an elaborate charade, cruel theatrics meant to dangle the prospects of peace, all the while preparing for war—something Ari Fleischer knew all along, as this exchange with the press aptly demonstrates:

Fleischer: “The objective is for Saddam Hussein’s Iraq to disarm, to stop threatening its neighbors, to stop repressing minorities within its own country. And that’s why Congress passed the policy of regime change.”

Press: “Well, which of those definitions is correct?”

Fleischer: “Well, let’s do it—let me cut to the bottom line on it. What I would propose is that in the event Saddam Hussein gives the order, and under his leadership and direction disarms Iraq, gives up its weapons of mass destruction, has no more chemical weapons, no more biological weapons, stops using hostility as a way to deal with its neighbors, stops repression of minorities with his own country, give me a call. After you cover Saddam Hussein doing these things, let’s talk about it. Until then, the president is focused on making sure that these developments take place as a result either of the UN resolutions being enforced, or by whoever in Iraq taking these actions to make it happen. But this is probably the mother of all hypotheticals. Give me a phone call when it happens.”

Press: “So Saddam could stay in power if those objectives were carried out?”

Fleischer: “Again, call me up when Saddam Hussein gives the directions for all those factors to take place.”

Fleischer: “I think this is a question of how many devils can dance on the head of a pin.”

Press: “It’s not. Can he stay in power and have regime change?”

Fleischer: “You’re asking the mother of hypotheticals. And I think it’s a rather…”

Press: “Does it refer to a leader or a government regime change?”

Fleischer: “It refers to actions that have to be taken to keep the peace.”

Press: “So it’s a question of policy, not personnel?”

Fleischer: “That’s a good way to put it.”

Press: “So he could stay in power if those things happen?”

Fleischer: “If you want to fool yourselves into believing that that’s what Saddam Hussein would do in policy, that’s an interesting way to approach it.”

The fact of the matter is that Saddam did, in fact, do everything listed by Ari Fleischer to effect a change in the policies of Iraq in order to preserve his regime. But President Bush—whom Fleischer represented—never had any intention of recognizing such change, even when it occurred. President Bush, Ari Fleischer and every representative of the U.S.  administration involved in formulating and implementing U.S. policy on Iraq was being dishonest in the extreme when dangling the possibility of a peaceful resolution to the Iraq problem.

In short, they all lied, and Ari Fleischer was the mouthpiece for disseminating these lies, a task he continues to perform to this day.